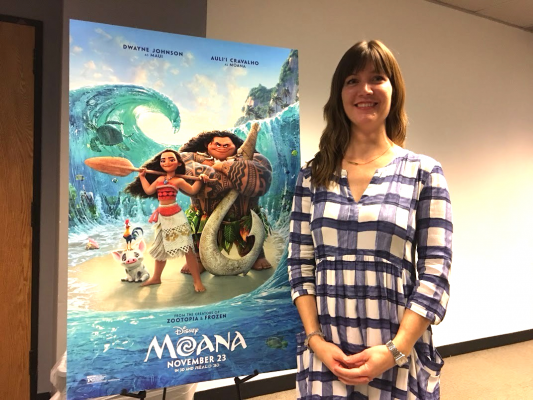 Dominating the cinematic scene since 1937, the Walt Disney Animation Company has produced over 50 feature films. The movie’s newest blockbuster hit, “Moana,” opened in theaters late November and has continued Disney’s trend of producing beautiful, emotional stories for all to experience. But, how does a germ of an idea for a Disney film become a full-length feature? That is where Jessica Julius, the senior creative executive, enters the scene. Julius visited Fordham’s Lincoln Center campus on Nov. 16, where she spoke to students not only about “Moana,” but also about what makes a good creative executive.

Julius has been with the Walt Disney Animation Company for twelve-and-a-half years, working on films such as “Tangled,” “Wreck-It-Ralph,” and “Frozen.” As a creative executive, she is responsible for helping the directors of a film flesh out their ideas, beginning her work at the conception of the topic. Some of her work includes performing research, finding writers, discussing the film’s themes and developing its characters and storyline. It is often a hard, long process to make a film, but it is one that is worth the effort.

In terms of “‘Moana,” Julius assisted Ron Clements and John Musker, the directors of the film, from day one. Musker and Clements are a famous directing duo, working on films such as “The Little Mermaid,” “Beauty and the Beast,” and “The Princess and the Frog.” However, what made “Moana” so different from other films was the incredible amount of research that the team performed about Oceanic cultures.

“‘Moana’ is really, really special because of the cultures, the people we learned from,” Julius explained, “And I think that’s really cool. That’s really new, and I hope we did those cultures proud.”

“Moana” is the story of a 16-year-old girl of the same name (voiced by native Hawaiian Auli’i Cravalho) who dreams of leaving her island home of Motunui and voyaging out into the open sea. However, when her home is in danger, it is up to her to find the demigod Maui (Dwayne Johnson) and save her people.

Julius helped conduct a lot of the research pertaining to “Moana,” including organizing trips to the Pacific Islands themselves. The team spent an extended amount of time there, where they interacted one-on-one with the locals and learned about all elements of their culture in order to make an accurate film. In addition, filmmakers formed an Oceanic Story Trust which included not only academics and anthropologists but also local elders, fishermen, and tattoo artists who helped ensure that “Moana” accurately represented the Pacific Islanders.

In the words of an elder named Papa Mape who Julius met on the island of Mo‘orea, “For years, we have been swallowed by your culture. For once, can you be swallowed by ours?” That became the charge for the team, and the movie itself transformed into one that yearned to celebrate the people and culture of the Pacific Islands fully.

“The one really cool thing about [‘Moana’] is that there’s no love story. That is not the point of this movie, and it something that Ron [Clements] and John [Musker] did not want from the beginning,” she explained.

However, the most important thing about making any movie, according to Julius, is successfully conveying an emotional story to audiences of all ages.

“When we’re thinking about the story, our movies have to mean something. They have to have emotional resonance for the audience, because if they don’t, they are just fluffy pieces of entertainment, and that’s not what we want,” she explained, “We want people to really care about their characters.”

After five years of dedication and passion from everyone involved in the film, audiences are truly able to admire the beauty of “Moana” not only as a film that contains a captivating, emotional plot with strong characters and themes, but also as a celebration of the Oceanic culture and the people who embody it.

It takes a lot more than one idea to produce a beautiful film. It takes hard work, passion and love from everyone involved. And, luckily, Jessica Julius is one of the people that helps to craft that