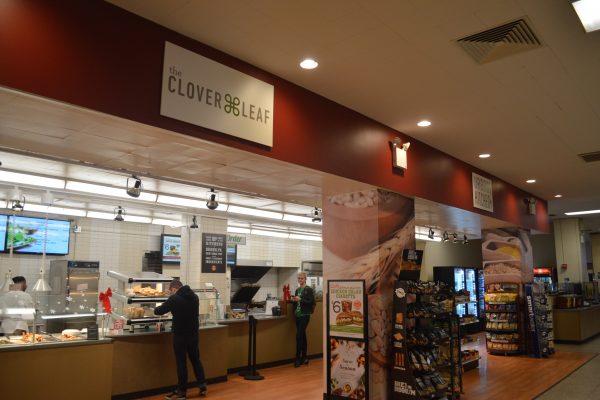 Students are being charged retroactively for purchases they have made at the Ram Cafe throughout the semester. (ELIZABETH LANDRY/THE OBSERVER)

At 10 p.m. on June 30, Sodexo ceased operations at Fordham University. By 7 a.m. the next morning on July 1, Aramark was officially in place as the university’s next dining service provider.

Since then, individuals involved with the transition have said that dining service operations on campus have improved and that the transition went smoothly.

“I think that it has gone better than expected,” Yint Hmu, Fordham College at Lincoln Center (FCLC) ’17 and chair of the United Student Government (USG) Dining Services Committee, said. “I was expecting a much more bumpy transition and they adapted very quickly to Lincoln Center’s atmosphere, and part of that I believe was due to the numerous meetings we had after Aramark was chosen.”

Giving the example of the expanded options in the Ram Cafe this semester, Hmu also noted that Aramark has been “very receptive” and that “the response rate to any complaint is very quick” compared to Sodexo. “Overall, I’d say that they’re a much better company to work with on the perspective of the students and giving feedback,” he said.

Among the other changes that Aramark has already implemented have been the lengthening of hours of operation for the Ram Cafe on Fridays and the reintroduction of Ben & Jerry’s ice cream into the dining venue, which was a popular product under Sodexo.

Additionally, Aramark announced in the USG Dining Services Committee meeting on Dec. 1 that they would be reintroducing the to-go Tupperware containers in the Community Dining Hall, a program originally facilitated by Sodexo but not retained during the transition. This program allows students to purchase a reusable Tupperware container from Aramark to take dining hall food to go. At the committee meeting, representatives from Aramark said that the sturdy green containers would cost approximately $5.

“But Aramark has demonstrated a sincerely committed approach to meeting the needs that we put out there and reacted positively to any amounts of feedback that they have been given and made the changes,” he said. “The team works with an incredibly positive perspective and it’s made it easier for us to discuss issues with them, go back and forth, and get to where we need to be.”

Both Yaun and Hmu, however, noted that there are still more changes and adjustments that need to be made.

“One thing is just getting them to improve on their meal timings,” Hmu said. “And what I mean by that is…to just make it a much more efficient system. And I think it will be addressed in time, because they are still transitioning into this space and they’re still adjusting and by probably next semester, I hope that we will have much more efficient dining options.”

Yaun said that there’s “fine tuning that needs to happen,” pointing to a discussion at the Dec. 1 Dining Services Committee meeting on difficulties that members of the Fordham community have experienced with finding and identifying gluten-free options at dining venues. “That entire gluten-free discussion needs to be resolved so that people on these diets can have select choices and find them easily,” Yaun said. “Those types of things need to happen.”

He also noted that there are no major changes planned or expected for next semester.

Every hourly employee who wanted to stay at Fordham was offered a position except for two individuals who did not pass background checks, according to Yaun.

“They kept almost all of the employees and you see the same old familiar faces who smile at you, who know you by name,” Hmu said. “And their performance is just so much better, and that’s when you realize that it was not the employees but the corporation that we were having issues with and the recipes that they were serving us.”

He also  encouraged students to give their feedback to USG so that they can be addressed in the monthly Dining Services Committee meetings.

“We have these committee meetings to advocate for you and your dining options,” he said. “So if something is not up to par, if you think something needs improvement, let us know and we’ll work with Aramark to improve it.”