How to Get Away With Voting 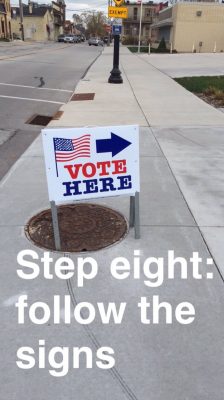 Huston chronicled her journey on her Snapchat story. (PHOTO COURTESY OF ELODIE HUSTON)

To what length would you go to ensure the fulfillment of your civic duty? This election season, Elodie Huston, Fordham College at Lincoln Center (FCLC) ’18, discovered just how much her vote meant to her. Upon learning that her absentee ballot would not be counted, Huston pulled out all the stops to ensure that her voice would be heard. What is especially remarkable is that, as a registered Republican, she felt compelled to go to such extremes to vote for the opposite party’s candidate.

“It turns out the mixup with my absentee ballot was my fault—there was a lot of confusion on my end as to who I needed to send my absentee ballot to,” Huston said. She explained that, after her first year of college, both of her parents had relocated. Although she was registered to vote in Sheboygan Falls, Wisconsin, she uses her father’s Sheboygan, Wisconsin address as her permanent address, so she sent her absentee ballot request to Sheboygan.

Huston sent the request a bit over a week in advance, “with a few days cushion time to make sure it got to WI in time.” By Monday morning, the day before the election, she still hadn’t heard anything.

Huston explained that later that afternoon, a clerk from her polling place called to inform her that it was too late to send her a ballot, as her absentee ballot request had just been received. In addition, she was told that she was supposed to vote where she was originally registered, in Sheboygan Falls, but that she could vote in person and update her registration. “Wisconsin is one of the few states that you can register day of,” Huston said.

Due to sheer luck of circumstance (her professor was running late), Huston had some time at the beginning of her 2:30 p.m. block class to email her father to see if coming home would be possible. By 3:00 p.m., she had purchased some relatively affordable tickets to Chicago O’Hare International Airport (O’Hare) and informed her professor that she would be leaving class early to catch her flight at 7:00 p.m.

“I ran home and grabbed my laptop and a clean t-shirt,” Huston recounted. “By 5:30 p.m., I was on my way to Newark, and by 6:30 p.m., I had gotten through security with 10 minutes to spare for boarding. And then my plane got delayed.” Nothing like a classic airport debacle to halt the suspense of her journey.

While en route, Huston said she felt “pretty silly. I used my emergency funds to pay for the flights and the taxis. But I felt pretty excited—I knew it was going to be a landmark election, and I felt incredibly lucky to be a part of that,” Huston said. Nonetheless, she landed at O’Hare by 9:30 p.m. Central time and was home at her father’s house in Sheboygan by midnight.

Why did Huston feel it was so important to get her vote in? And for the Democratic nominee no less? As tweeted by Michaela Finneran, FCLC ’18, “if noted Republican @ElodieHuston can fly from NYC to WI to vote for HRC [Hillary Rodham Clinton] I THINK YOU CAN PUT SOME PANTS ON AND WALK TO YOUR POLLING PLACE.” The escapade was undoubtedly extreme. But, for Huston, it was necessary.

Huston explained, “I had voted for a different Republican candidate during the primaries and was appalled and dumbfounded when Trump managed to win the nomination. For a while after his nomination, I wasn’t sure whether I would vote for a third party candidate, or for Hillary. But it was made apparent pretty early on that voting third party, even though I didn’t particularly care for Clinton, would be a vote taken away from her rather than Trump. To me, he is the manifestation of the most evil parts of our world. I couldn’t stomach the idea of being complacent in his election. My conscious dictated that I prevent his election. And so I bought a ticket.”

The next day, Election Day, she ate apple pie for breakfast (for patriotic measure) and voted mid-afternoon, before returning home to finish a paper and meet her dad and stepmom for dinner. “None of us were expecting a Trump win, so we weren’t paying attention to any polls,” Huston said. “My dad was relatively quiet while my stepmom and I gushed about the potential of having the first female president in office—he voted third party.”

After dinner, Huston’s father drove her to stay with her grandparents in Milwaukee, who would drive her to O’Hare in the morning. “By then, Wisconsin’s polls had closed and counties were starting to be called. We were pretty surprised at the outcomes pouring in. Wisconsin hadn’t been carried by a Republican presidential candidate since Reagan in 1984. Our county, too, was generally pretty blue. It’s a mix of industrial and agricultural, but leans heavily towards the industrial,” Huston said.

“I spent the rest of the night, until about 1:30 a.m. Central time, checking results on my phone.” A few hours later, Huston’s grandparents dropped her off at O’Hare.

“I hung around my gate watching the news, and it was crazy. Everyone was really quiet, and not just because it was god-awful early,” Huston recounted, “And then I made it back to the city in time Wednesday morning for my 11:30 a.m. class.”

After having some time to take in the results of the election, Huston said that she does not regret her efforts. She laughed, “Although if anyone wants to VenMo me my airfare, I wouldn’t complain.”

“I was raised to make decisions with a ‘glad I did’/‘wish I would have’ approach. When I’m making a choice, I try to figure out whether it’s something I’ll be glad I did in 15 years, or will it be something I wish I would have done? If I hadn’t participated in the election, I would have regretted it, especially because of Wisconsin unexpectedly flipping,” Huston said. “Also, I am immensely grateful that I am allowed to vote in this country’s election. I do not want to waste a privilege and a right that so many other people are denied.”