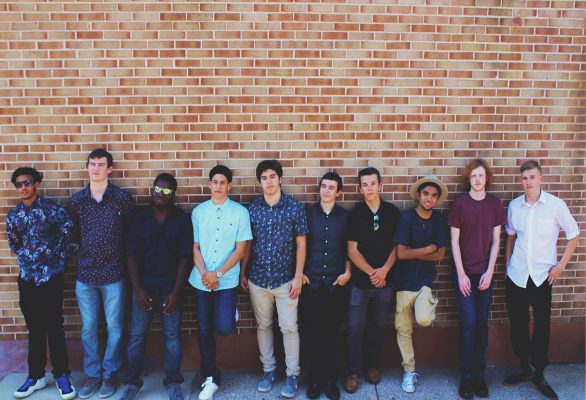 “Well it was a mashup of Green Day’s ‘Basket Case’ and ‘The Static Age’, and there was a saxophone and there was a feather boa,” Franco Giacomarra, Fordham College at Lincoln Center (FCLC) ‘19, told me. “I think that’s where it started.”

And there was a makeshift stage in a sticky, humid gymnasium of an all-boys Catholic school, too. There was a banner that read “Battle of the Bands” and there was a rack of repurposed theater-club lights that shone down on Giacomarra and four other friends. They called themselves “The Mob,” and they wore short-sleeved black button downs that were just a little too baggy with striped ties that hung just a little too low, and their percussionist paraded around the stage with a cowbell and a fedora that was too big for his head.

To be suspected, their setlist consisted of a familiar mixture of angsty, pop-punk, and I can imagine that their audience reacted accordingly to this display of rehearsed grunge. “But, really, we didn’t know what we were doing, and so we decided to add a saxophone solo to Green Day,” Giacomarra said.

And so, in a fateful foreshadowing of a future, more eclectic style,their drummer picked up a saxophone, put on a feather boa, and marched around the stage while their school-band percussionistturned-Sabu-Martinez friend banged on any remotely-clangorous object he could find to the backdrop of Green Day angst. The audience ate it up, and on that stage, to at least Giacomarra and his band of sweaty high school buds, they had found a groove.

To no one’s surprise, “The Mob” doesn’t exist anymore. But Avenue Eight does, and in November they released their first professional EP amidst a crowded lounge in North Philly.

Avenue Eight still retains the original five who appeared nearly three years ago on that gymnasium stage, though they’ve since added five more and a horn section that
caters to the band’s now brass-infused, quasi-funk style. ‘Funky indie rock,’ as they call it.

And funky indie rock it is, because their new album, called “Get Up On The Get Down,” sounds as motley and as improvised as ‘funky indie rock’ would suggest. Somehow, the band has forged a marriage between their punk beginnings and their recent musings in early 70s, brassy Soul Train dance anthems.

In many ways, the album references funk in its early, still 60s bound days, and there are heavy notes of those innocent brass choruses that characterized Earth Wind and Fire’s earlier tracks— but innocent they are, because any hefty funk influences are balanced, sobered even, by their juxtaposition with mid-2000s white-boy punk.

Avenue Eight’s promise of an eclectic set list certainly delivers. The title track, first on the album, gives us a wah-wah reminiscence of Sly and the Family Stone with a chorus fit for a Bruno Mars pop hit; “At Your Door’s” descending baselines and punky vocals are heavy on the Ben Folds references while delivering a refrain that recollects Maroon 5 seven years ago; “Buzz Off’s” piano riffs make even heavier nods to Folds while accompanying a melody only a stone’s throw away from “Lady Madonna;” and “Mr. Minor’s” mixture of slap bass and brass-hits sounds like a Trombone Shorty deep-cut with vocals from 2010 My Chemical Romance. Heavy on the references, yet original enough to be light on the sampling.

But, for sure, this brand of alternative throwback to 70s brass sections and Otis Redding-esque ballads is nothing new. In fact, it’s hot right now. Just listen to Saint Paul and the Broken Bones or Black Joe Lewis. It’s all the rage.

Avenue Eight sees themselves as different, though. “Our eclectic style isn’t something that we try for,” Giacomarra said. “It’s not a sound we try and make,” one of his bandmates chimed in. “It’s because we’re all into different sounds and different music and we just write songs that we think bring all of that together,” Giacomarra continued. “Sometimes it just starts with an idea, or a little riff. And then we build. And there’s 10 of us, you know. We’re all equal parts of the band. We’re all the band, and we’re all so different. I’m not sure how it works, to tell you the truth.”

“And one more thing. This is important,” he said. “For us it’s all about having a good time. I think that’s the difference between us and everyone else. It’s not so serious. Some of those bands take themselves so seriously. They’re always looking for that sound. We just like to have fun and we just like to mix together a bunch of different styles.” Felipe, the band’s cowbell banging and Fedora wearing percussionist, chimed in with a sufficient summary: “We kind of just want to make
people dance.”

“Get Up On The Get Down” is available for purchase online at the band’s website.