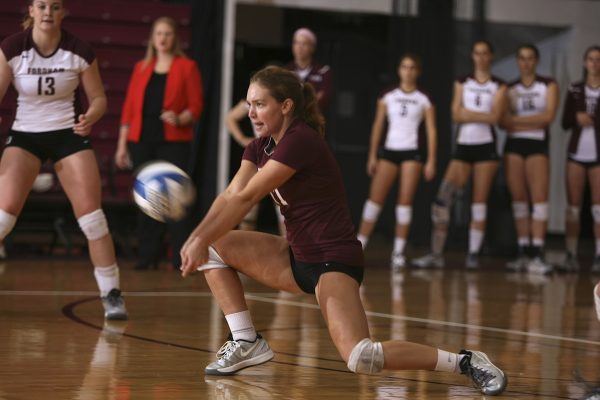 Students from both the Lincoln Center and Rose Hill campuses can join intramural leagues in order to stay active without the responsibilities of a college sports team. (ALLY WHITE/FORDHAM SPORTS)

While the Lincoln Center campus is known to be Fordham’s home for the liberal arts including dance and theater, along with a large amount of science majors, it has never been known as a center for sports. This is not to say that the students at Lincoln Center aren’t athletic, but rather the campus doesn’t offer any forms of sports facilities other than the fitness center on the second floor of McMahon Hall. To address the lack of recreational sports available on campus, students are invited to sign up for intramural sports during the fall and spring semesters.

The intramural teams are both single-sex and co-ed and offer a wide array of sports from flag football to basketball and soccer. Once a team is assembled and registered, students take part in scheduled games against other teams from both campuses. Each team hopes of earning an opportunity to compete in the championship. Intramurals also offer students the fun of playing their favorite sports without the time commitment of being on an actual college team. Of course, students from Lincoln Center are presented with the challenge of transporting their teams to and from the games. Because the games are exclusively in the Bronx, it can be tricky since some games are scheduled late in the evening on weekdays. With the help of the Ram Vans transportation can be made easy.

One common issue regarding co-ed teams is the lack of fairness between the male and female players. She added, “I think [co-ed teams] are a great idea but the guys make these teams and sometimes put girls on it because it is a requirement. Sometimes we don’t play many minutes or even get a chance to make significant contributions.” Her comments about the roles girls play on some teams can be a cause for concern, but it goes without saying that almost every girl goes into these games with the mindset of crushing their competition. A point raised by Toufayan is the minimum requirement of two girls on the field for each team. If a team is down one girl, then they will have to forfeit that game. Another scenario is if a team only has two girls, then those girls would have to play the full duration of the game without being able to take a break. It is important to note that the rules are designed to ensure that girls play a role during games instead of simply showing up to be placed on the bench.

Intramural sports definitely mean a lot to those who love sports but also love going to school in Manhattan. While Lincoln Center students have a discounted access to the local YMCA and the benefit of being a few blocks away from Central Park, playing intramural sports provides a form of satisfaction that can’t be obtained from a regular pickup game. It is also a great opportunity for Lincoln Center students to show others we are masters of more than just the arts, and that we enjoy sports just as much as everyone else.