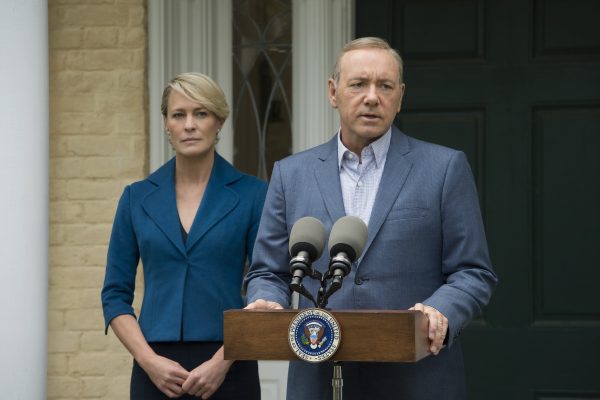 Robin Wright stars as Claire Underwood on Netflix’s “House of Cards”. (HOUSE OF CARDS/COURTESY OF NETFLIX)

It’s everywhere. I can’t recall one time in the past five years where I haven’t seen an advertisement for a TV show centered around politics. “Scandal,” “The Good Wife,” “Madam Secretary,” and everyone’s darling, Netflix’s “House of Cards” have been plastered across television screens in American households. As someone who religiously watches all these shows, I have spent the past few months thinking, “Why?” Why have American political dramas become the new superhero movies of television, with new ones seemingly being produced more than once a year? Are political television shows an example of life imitating art? Which got me thinking: why change laws when you can shape minds?

One attribute you may notice about the four shows I’ve listed is that all have a female powerhouse at the helm. These shows exemplify all the roles women can have in the political world, and to my surprise (and to Hollywood’s delight), no one character is quite like the other.

“Scandal’s” Olivia Pope is a former White House Communications Director-turned-“fixer”, a coveted lawyer who specializes in saving endangered careers drowning in, you guessed it, scandal. “The Good Wife’s” Alicia Florrick follows in Hillary Clinton’s footsteps, as the wife of a disgraced politician looking to start a career in her own right. At first glance, “Madam Secretary’s” Elizabeth McCord may seem like the Clinton-archetype you’re looking for, but her complete disregard for protocol and valuing diplomacy over poll numbers puts her in a minority of television’s political class. Lastly, the chilling co-protagonist of “House of Cards,” Claire Underwood, is introduced as the founder of Clean Water Lobby, but audiences quickly realize Jenny from the “Gump” is meant to be so much more than Kevin Spacey’s trophy wife.

Perhaps the reason for America’s fascination with these shows, and the reasons they run for years on end, is that they illustrate a political fantasy: women in positions of power. While women, including those from historically disadvantaged communities, are enjoying more political influence than any other period in American history, these shows illustrate what would happen if more women sought public office. At the end of an election cycle on an urban campus setting, I turned to some community members to give their take on the role women are playing in these political television dynasties.

When asked who the most realistic and idealistic characters were out of the five leading ladies, Nora Hafez, Fordham College at Lincoln Center (FCLC) ’19, made her case for Madam Secretary herself: Dr. Elizabeth McCord. Hafez, a middle eastern studies major, argued, “Elizabeth, who plays the role of a female Secretary of State, of all the other characters on the show, does the most work and is always the most prepared/informed person in the room.”

Thania Hussein, FCLC ’19, had a different answer. A political science major, she argued for my personal favorite, Claire Underwood. “As a female, she had her own charity, her own NGO which she ran, but,” she continued, “she was always expected to be on the sidelines. Her husband was always the priority.” While Claire and Elizabeth are two incredibly different women in Washington, I’d argue that they exemplify the realities for a woman in Washington.

Hussein continued, “The idealistic one… “The Good Wife,” Alicia Florrick… Hillary Clinton! That’s who she is, because she still stood by her husband and rebuilt her career, and even opened her own law firm for all female associates.”

Elisabeth O’Neill, FCLC ’19, argued the life of “Madame Secretary’s” Elizabeth McCord “seems to be portrayed in the most unrealistic way.” She added, “…The producers probably do not want to spend a long time on one topic. However, when they spend only one or two episodes on a serious issue that faces our country, I find it hard to believe.”

So, does the representation of women in political television shows reflect Americans’ desires to see women hold elected office or positions of influence? O’Neill, a communications and media studies major, agreed with this statement, adding, “In media, now more than ever, we see television shows with strong female protagonists that go against the stereotypical roles that are usually given to women.” Hafez was quick to remind me, “Shonda Rhimes is known to incorporate every God-given minority into her shows. Olivia Pope is an African-American woman in the most male-dominated field in the world: politics.”

I should also note when Kerry Washington was nominated for an Emmy in 2013, she ended a drought for women of color, who had not been nominated in the category of “Outstanding Lead Actress in a Drama Series” in 18 years. Washington, like her character in the world of politics, represents a changing landscape in the medium of television.

Hussein concluded that these shows “should definitely include people of color, trans women and queer women. There needs to be more of an effort, because that is the reality of our world.” Despite their flaws, however, these political television shows illustrate a changing political climate, and I look forward to seeing more historically disadvantaged communities being represented on our screens in the years to come.