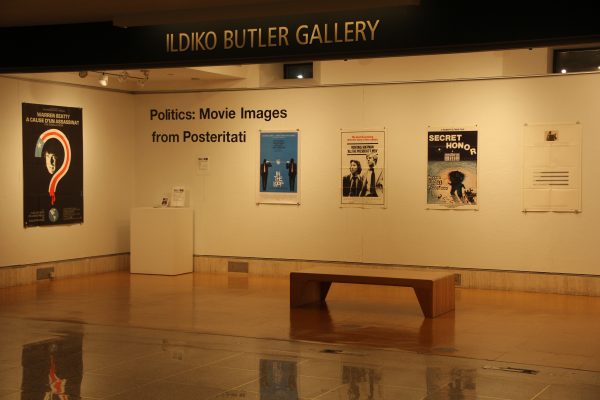 "Politics: Movie Images from Posteritati" will be on display until Dec. 1, 2016 (JASON WANG/THE OBSERVER)

The political themes of the Ildiko Butler Gallery’s current exhibition are no coincidence. This year’s presidential election has so permeated every aspect of our lives that even the most secluded of people must be sick of hearing about the candidates. While the mention of the present election has predominantly had a negative connotation, at Fordham’s Butler Gallery, it provides purpose and inspiration for an enticing exhibit of political movie posters.

Titled “Politics: Movie Images from Posteritati,” the exhibit looks to “reveal the world of politics refracted through the wry, spectacular lens of mass entertainment,” as described by gallery officials. The movies advertised through the posters find common ground in representing extremes of our political history, often through satire, as media consumption is fueled by the sensational. Our current election is a perfect example of a dramatic moment in history, and if this same exhibit were curated 10 or 20 years from now, it is safe to assume that there would be a poster or two dedicated to the ridiculous antics that have characterized the 2016 election.

One of the most fitting choices is the poster for the 1972 film “The Candidate,” which stars Robert Redford as Bill McKay, son of a formerly-prominent politician who is pulled into the election for California senator to run against the Republican candidate. Since it is practically guaranteed that the Republican will win, McKay is given the freedom to do and say whatever he wants on the campaign trail. In order to avoid losing by a disgraceful number of votes, he pushes his left-leaning views more to the center, inspiring the film’s tagline “Nothing matters more than winning. Not even what you believe in.” The poster shows Redford standing in front of the American flag, arms crossed, blowing a giant pink bubble. The image is jarring, the perfect representation of the irony that is the carefree candidate. Eventually, McKay is somehow victorious, and in the final scene says to his campaign manager, “Marvin… what do we do now?” This result is daunting to all that saw Donald Trump’s quest for the presidency as a joke in the beginning, only to find him inches away from the White House now.

Equally fitting is the inclusion of “Bulworth,” a film about Jay Bulworth, a politician, who, fed-up with his life and with politics, hires an assassin to kill him while on campaign for reelection to the U.S. Senate. His looming fate gives him a freedom he’d never experienced before, and he starts living his life honestly by speaking his mind and acting with little regard to the public’s reception. His outspoken, unapologetic way of living, paired with the passionate group of followers he garners, makes his resemblance to Donald Trump’s behavior in this election uncanny. In the poster, the antithesis of the stereotypical politician is seen crawling out of and controlling the mouth of Bulworth.

“All the President’s Men” examines the Watergate scandal from the point of view of two Washington Post reporters. The poster is simple, black and white except for one ominous sentence in bright red: “The most devastating detective story of the century.” The poster for “Secret Honor,” a film entirely consisting of a monologue delivered by a reflective Richard Nixon, shows a broken man symbolically shining a light on the white house and his past decisions that destroyed his name. Also on display are the French counterparts of the posters for “The Parallax View” (“There is no conspiracy. Just twelve people dead.”), Stanley Kubrick’s satire “Dr. Strangelove or: How I Learned to Stop Worrying and Love the Bomb” and “The Manchurian Candidate” (like “Zoolander,” but with a prisoner of war as the assassin instead of a model). The poster for “In The Loop” (available to stream on Netflix) perfectly describes the basis of the plot: Americans on one side, Brits on the other and a big mess of miscommunication in the middle. Finally, the minimalistic, primarily white poster for “Four Days in November” is fitting with the subject of the movie: JFK’s assassination.

The posters were selected from Posteritati, an art gallery that deals vintage and modern movie posters and has a collection of over 9,000 individual pieces. Curated by Professor Mark Street, the exhibit will be up until Thursday, Dec. 1, 2016.