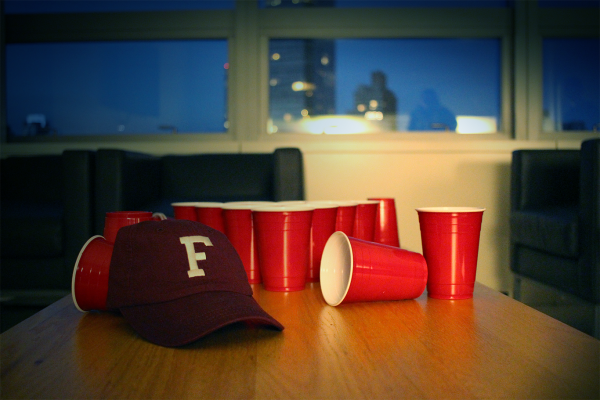 In 2015, there were 34 drug abuse violations and 119 liquor law violations on campus. (PHOTO ILLUSTRATION BY KATHRYN HORNYAK/ THE OBSERVER)

Drug abuse violations and liquor law violations both increased at Fordham in 2015, according to the 2016–2017 Annual Security and Fire Safety Report.

Comparatively, there were 19 drug abuse violations and 127 liquor law violations in 2013. The violations in the three years all occurred in the residence halls on campus. The other two areas where the violations could have occured were non—campus property and public property.

The increase in violations, particularly those involving alcohol, occurred because “we had a couple of unusual things happen after McKeon Hall opened” in 2014, Dean of Students Keith Eldredge said.

Eldredge said that the most unusual thing that occurred during the 2014–15 academic year was an increase in liquor law violations in the spring semester when compared to the fall semester.

“We usually see more alcohol and drug violations in the fall semester,” he explained. “And most of those violations in both of those categories are by freshmen.”

“That first year, we saw that reversed for the first time in a number of years,” he continued. “So you take a high spring semester combined with a normally high fall semester and that’s a big chunk of the reason why 2015 is significantly higher than 2014.”

The Class of 2018, who were freshmen during this period, were also partially responsible for the tripling in hospitalizations of Fordham students for alcohol consumption in December of 2014. As of Dec. 10, 2014, 13 of the 16 students who were evaluated by Fordham staff after being visibly intoxicated were members of the 2018 class.

To address the unexpected rise in violations in spring 2015, Eldredge said that both the Student Involvement and Residential Life staff took steps to ensure the effectiveness of Orientation, Alcohol Edu, floor meetings, the training of RAs and Resident Directors, and sanctioning guidelines. Jenifer Campbell, director of Residential Life at Fordham Lincoln Center and a Public Safety supervisor, spoke with resident freshmen on their first night about the University’s expectations and policies regarding alcohol and drug usage.

Eldredge said that almost all of the drug abuse violations were for marijuana.

Campbell said, “We do a lot of outreach to students in terms of conversations around harm reduction, because we don’t necessarily believe that all students are going to abide by the laws and regulations of New York State,” regarding alcohol and drug use on campus.

“We’re not foolish enough to think that we can just ignore it,” she continued.

Drug and alcohol usage, however, is not as common as students it is. According to the 2015 Core Alcohol and Drug Survey conducted on the Lincoln Center Campus in spring 2015, 33 percent of Fordham students reported consuming alcohol once a week or more, while Fordham students perceived that 81.3 percent of their classmates consumed alcohol once a week or more.

In response to the increase in drug and alcohol violations, both Eldredge and Campbell pointed to the university’s new “LC After Dark” initiative, which began last year.

“We acknowledge that for some students, maybe they’re connected to drugs or alcohol because they perceive that there’s nothing else to do,” Eldredge said.

As a result, Residential Life and Student Involvement planned events both in the residence halls and in other venues at night for students.

“There’s lots and lots of different reasons why students drink and do drugs so we’re trying to hit it from different approaches,” Eldredge said.

Campbell believes that addressing alcohol and drug use on campus is an “ever-evolving situation.”

“I think ideally for me it’s always what can we do to engage a student in their interests so that there are other things they can do besides alcohol, drugs and those types of activities,” she said.

Eldredge said that with these violations, particularly among freshmen, there’s ultimately “a bunch of 18-year-olds where it’s their first time away from home.”

“There’s going to be those issues of experimentation,” he said. “We’re never going to get zero violations.”