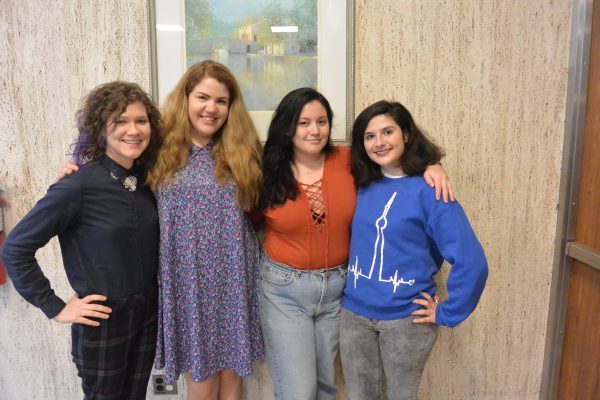 When discussing the LGBT+ acronym, it’s always important to include the “+” at the end. This reminds us that our community doesn’t just include lesbians, gays, bisexuals and transgender people. The “+” is all inclusive, encompassing intersex, questioning youth, allies, those who identify as asexual, demisexual, polysexual/polyamorous, pansexual;  the list seems limitless and is added to constantly. When you’re a part of Rainbow Alliance at Fordham Lincoln Center,  you’ll always be included.

At the group’s first meeting, the theme was “Ice Cream and Identities.” Members were served ice cream and talked about all the identities within the LGBT+ alphabet soup. But, before we dove into the fun, we were all asked to introduce ourselves with our name, preferred pronouns, how we identify ourselves, and of course – the most important aspect of who we are – our favorite ice cream flavor. Some used terms that aren’t common but are gaining more attention as people continue to identify themselves as such. One member said that they were pansexual, another member identified as queer. These identities aren’t completely foreign, but are less used than someone identifying as gay, lesbian or bisexual.  During this first meeting, the group also debunked the misconceptions surrounding the different identities in the LGBT+ acronym.

The members began to uncover some common misunderstandings about sexual identity and gender identity. We talked about the difference between pansexual and bisexual, what being aromantic means as opposed to asexual and various other topics. This meeting consisted of all the members teaching one another and clarifying these misconceptions. For example, one member said, “There’s a common misconception that bisexual and pansexual are the same thing.” This person continued to debunk and clarify why people thought this and educated everyone on the difference between the two.

Lyndsey Auge, FCLC ’19, who just began her first year as President of Rainbow Alliance, talked about what the main objective of the club was. Auge said, “The objective, mainly, is to provide a safe place for students within the LGBT+ community and to have a place that offers an education about different identities, as well as topics within the communities. Aside from being a place to get some education, it also serves as place to build a community and have a family on campus.”

Outside of the general meetings that they hold every Tuesday from 5:30-6:30 p.m. in the Atrium, they have events throughout the school year to expand their safe space to other LGBT+ students and allies on campus. “[One event] we have [is] ‘Cue The Spotlight’ in the fall. It’s an art showcase, in which you can show queer art, if you choose, or you can come and support queer artists. The night can consist of slam poetry, spoken word, music, etc. People have also shown paintings that they’ve done,” Auge said.

Their biggest event of the year is Queer Prom, which, even if you’re not a part of the LGBT+ community, you should be excited for. Auge explained, “At the end of the year, we host Queer Prom, which last year was Rocky Horror-themed. It’s a fun time to listen to music, dance and eat free food. There’s always free food.” Anytime a club mentions free food, everyone knows that students will always attend. Auge also mentioned that the group is looking into a trip to Big Gay Ice Cream downtown in East Village.

In addition to its exciting events planned for the year, Rainbow Alliance is one of the most accepting and inviting groups on campus. You don’t have to be queer to join and if you are queer,  they’ll make you feel proud to be queer. If you need a reason to join Rainbow Alliance, here’s what the president of the club had to say: “Rainbow is an accepting place, it’s a safe space for all to come and be who they are. It can also provide a space to learn about themselves and learn about others.” Auge explained that in Rainbow, you build a sense of family “that you really grow to care about.” If you’re still figuring yourself out, Rainbow Alliance is a safe and comfortable community to utilize.