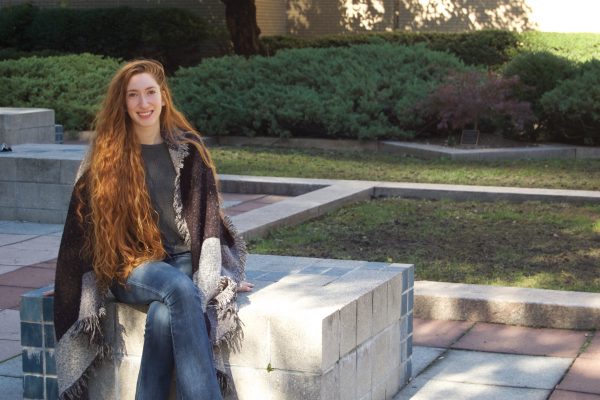 The philosophy faculty at Fordham College at Lincoln Center (FCLC) awarded the Jane B. Aron Memorial Prize in Philosophy to Miriam Ambrosino, FCLC ’17, on Oct. 4.

The prize of $2,000 for tuition is awarded to a rising Lincoln Center senior philosophy major for their academic achievement in the field.

“We always have a hard time deciding how to give it to just one student,” Associate Chair of the philosophy department, Jeffrey Flynn, Ph.D., said prior to presenting the certificate to Ambrosino. “So many of our majors display the excellence that the award recognizes. But I will say this about this year’s winner, one of her professors said that the papers she wrote were the best undergraduate philosophy papers the professor had ever read.”

Ambrosino, a pre-med student who is majoring in philosophy and minoring in bioethics, came to Fordham interested in both neuroscience and philosophy. She later developed an interest in Theology as well. “Now being a senior and neither being a neuroscience or theology major, and only a philosophy major, I think I realized that everything I was looking for in those subjects, for me could be dealt with through questions in philosophy,” Ambrosino said.

“I think every subject relates to philosophy and I think computer science and neuroscience will always be relevant to my interests in philosophy,” Ambrosino said.

After graduating, Ambrosino wants to become a psychiatrist and apply what she has learned in philosophy to concepts in psychiatry such as the categories of mental illness and the approaches to scientific study and exploration.

The Jane B. Aron Memorial Prize was created in 1983 by Jacqueline Morrison, who named the award after her mother and gave the award in honor of two Fordham professors she studied philosophy under, Astrid and Robert O’Brian.

Flynn referred to an article in The Observer from 1983, “It says here that Morrison praised the O’Brian’s guidance and support and said their brilliance was an inspiration.”

Astrid O’Brian, one of the professors to whom Morrison dedicated the award, taught philosophy at Fordham for more than 50 years and died this past spring.

Following the announcement of the winner of the award, Charles W. Mills, Ph.D., of the CUNY Graduate Center and award-winning author of five books, lectured on racial justice and Liberalism for the 32nd annual Daniel J. Sullivan Lecture.