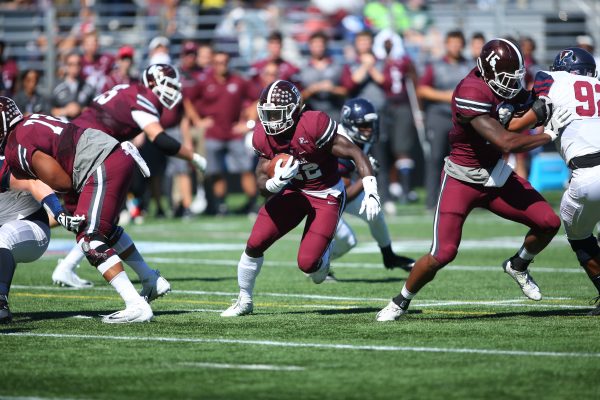 Fordham Rams defeated the University of Pennsylvania Quakers in front of a packed crowd at the Homecoming game on Sept. 24. (PHOTO COURTESY OF FORDHAM SPORTS)

As students crowded into the stadium, a sea of maroon took over and excitement filled the bleachers. On Sept. 24, the Fordham Rams played the University of Pennsylvania Quakers in the highly-anticipated 2016 homecoming game. The homecoming tent flooded with alumni and seniors who were all enjoying their time eating, drinking and watching the dancers and cheerleaders perform as they waited for the game to start at 1 p.m.

“Dancing in the tent was exciting because it carries on the legacy of Fordham and commemorates the great alumni who have gone on to be successful,” Rachel Meyer, Fordham College at Lincoln Center (FCLC) ’20, said.

The game began with Penn kicking the ball off and the Rams returning it to the 20-yard line. Without wasting any time, running back Chase Edmonds, Fordham College at Rose Hill (FCRH) ’18, ran 22 yards to score a touchdown, bringing the score to 7–0 when the Rams converted the extra point. With 7:21 left in the first quarter, the Quakers responded, scoring a touchdown and earning the extra point, which brought the game to 7–7. With 3:32 left in the quarter, Edmonds scored another touchdown and Clayton Welsh kicked the ball for an extra point, ending the first quarter with the Rams up 14–7.

The Rams wasted no time scoring in the second quarter, making a field goal from the five-yard line at 14:53. The score was now 17–7. On a later drive, passes by quarterback Kevin Anderson and multiple rushes by Chase Edmonds put Fordham up 24‒7 with 11:45 left.

As Fordham continued on the next drive, Penn intercepted a pass and started at the 20-yard line with 6:08 left in the second quarter. Despite a five-yard penalty for a delay of game and a fumble, Penn managed to score a field goal, cutting, their deficit to 24–10. As the clock started to tick towards halftime, Penn called a timeout with five second left in the quarter. The Quakers were flagged, giving Fordham a chance to score a touchdown. Although Penn stopped, Fordham from scoring a touchdown, they ended the first half of the game with a 14-point lead.

The fourth quarter began with both teams trying to score until Penn called a timeout with 10:39 left in the game. Fordham was able to take over with 7:27 left in the game, giving them a chance to score again. The Rams capitalized on this opportunity and Edmonds scored another touchdown with 5:31 left in the game, bringing the score to 30–17, then to 31–17 after converting the extra point. The Quakers could not catch up, and in the end the Rams won with a final score of 31–17.