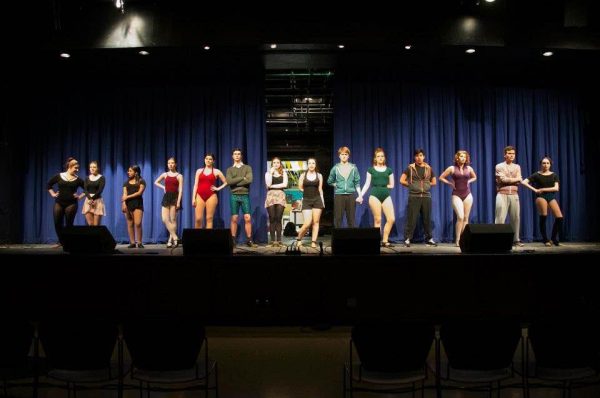 It is no surprise that a college campus only a few feet away from Manhattan’s Theatre district would have its own musical theatre club. The Splinter Group has served as an outlet for all Fordham Lincoln Center students to express themselves through art for “There’s so much talent right under our roof,” Danny Holmberg, Fordham College at Lincoln Center (FCLC) ’18, treasurer and PR representative of the group, said. “Splinter lets us channel it into something beautiful.”

In 2013, the club was rebranded with a notorious production of the acclaimed Stephen Sondheim musical, “Into the Woods.” Since then, it has been an ambitious journey to becoming one of the biggest clubs on campus. For the past three years, it has grown in popularity with a major event every semester, including one full-scale musical production per year. In 2014, it was “A Chorus Line,” a classic musical that tracks the struggles of several performers. “For the club, ‘Into the Woods’ was the catalyst, ‘A Chorus Line’ was the reaction,” Holmberg said.

Last year, students raved about their Spring production of “The 25th Annual Putnam County Spelling Bee,” held in Pope Auditorium. It featured larger sets and audience participation, as students were invited on stage and asked to help spell words the e-board had invented.

Before the show, Angela Yamarone, FCLC ’17 and Splinter co-president, was nervous about the public’s reaction. “We knew the show itself was funny, but we weren’t sure how the audience would react,” Yamarone said. The night ended up being a success, propelling Splinter to the status of a club to be reckoned with. “To have our peers laugh at all the jokes felt awesome. It made us feel like we finally have our place on campus, as a performance group,”Yamarone said

Auditions are open to any undergraduate student, regardless of major. None of the board members are part of the Theatre Department, though some are pursuing the theatre minor.
And another way Splinter makes their shows more accessible? Free entry. By not charging for tickets, the group provides an opportunity for students to attend a musical on a Friday night for free on campus to see their peers perform.

Part of the reasoning behind not charging for admission has to do with the rights the group must acquire in order to stage any theatrical production. By not charging for admission, Splinter is able to keep that cost down. The group works closely with the Office of Student Involvement and the Student Activities Budgeting Committee, to ensure that the financial aspect works out smoothly. “It’s a well-oiled machine,” Holmberg said. After acquiring the rights, the club’s board signs a contract, stating just how much of the show they can change, and how much needs to remain intact. Once the scripts are received, auditions start rolling.

This year, the club is setting their goals high, aiming at two major events per semester. This semester, the group will perform the musical “Fugitive Songs” in Pope Auditorium. The contemporary song cycle, written by Chris Miller and Nathan Tysen, opened Off-Broadway in 2008. “It’s an inspiring story about people on the run,” Yamarone said. “We can all relate to the songs, as students going through the transition, out into the real world. Theatre is all about telling stories.” As for their other event this fall, they are partnering with the United Student Government to host a Broadway Karaoke Night, as part of the LC After Dark series. Sharon Connelly (FCLC ’18), Splinter secretary, believes these events work together towards the club’s mission. “We want to have a balance,” she said. “Everyone in our shows has to audition for them, but we’re also hosting events that are available to everyone.” Why? “We want to build a sense of community. You can even lip sync, but just have fun performing.”

Auditions will be held Friday, Sept. 30 and Saturday, Oct. 1 in the music practice rooms across from Franny’s Space. Interested students can sign up for a slot by emailing [email protected] Broadway Karaoke night will be held on Oct. 14, while “Fugitive Songs” will be performed on Oct.