After Nine Years, ‘The Boy Who Lived’ is Back 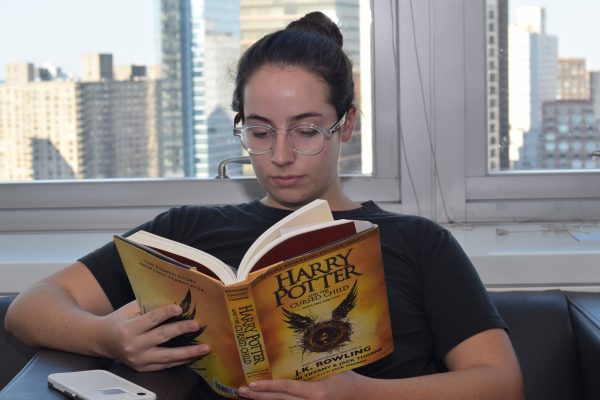 “Harry Potter and the Cursed Child” resonates with those who grew up reading the “Harry Potter” series. (SAM MCHALE /THE OBSERVER)

Fans who grew up loving “The Boy Who Lived” got a magical surprise after nine years with the release of “Harry Potter and the Cursed Child.” The book has been a huge hit among fans already, some of whom waited in lines all night for the book’s release. The book is made up of the scripts for a two-part production that is currently underway in London and tickets to both parts are on sale now. According to the BBC America website, there have been talks of bringing the play to the United States, although nothing has been confirmed. J.K. Rowling has always wanted to reach her fans all over the world, so it seems likely that the play will make its way across the pond.

When talking to people who have read the book, I learned that they managed to read the book very quickly, just as I had. The overwhelming opinion is that the book was a success. Although the two-part script itself was written by Jack Thorne and not J.K. Rowling, it was well done and based off of a new story by Rowling, Thorne and John Tiffany. The biggest complaint about the book seems to be that the language and actions of some characters were inconsistent with J.K. Rowling’s style. Those details, however, do not stop people from having an overwhelmingly positive opinion of the book. Sofia de Jesus, Fordham College at Lincoln Center (FCLC) ’20 and avid “Harry Potter” reader, said that “by the end, [the book] started growing on me, but not in the same way as the original series.” The story encompasses lessons and adventures similar to those seen in the Harry Potter series, though it brings in new elements that set the book apart. This story focuses on the children of the original trio, paying particular focus to Harry’s son Albus.

Albus is the misfit of Harry’s children, and he becomes the epicenter for action throughout the play. The action takes off when Albus befriends Draco Malfoy’s son, Scorpius. The two become an unlikely pair and their friendship is a large aspect of the story. They decide that they want to right the wrongs of the past, but the righting of the wrongs takes an unexpected turn for the worse.
“Harry Potter and the Cursed Child” revitalizes the wizarding world and brings back famous places and objects while still introducing new ideas and people. Godric’s Hollow becomes an integral place in the book, and the Triwizard Tourna ment featured in “Harry Potter and the Goblet of Fire” returns in an unexpected way. Time Turners, which Hermione used in “Harry Potter and the Prisoner of Azkaban,” also make a comeback, despite having been outlawed and, theoretically, destroyed. Other famous wizards that fans loved also made appearances in the book. Cedric Diggory and his father, Amos, become a big part of the story.

“Harry Potter and the Cursed Child” is a great read for Harry Potter fans. It offers nostalgia to fans of the original series by bringing back the childhood magic of reading the series for the first time. Copies of the book are available right here at the campus bookstore.