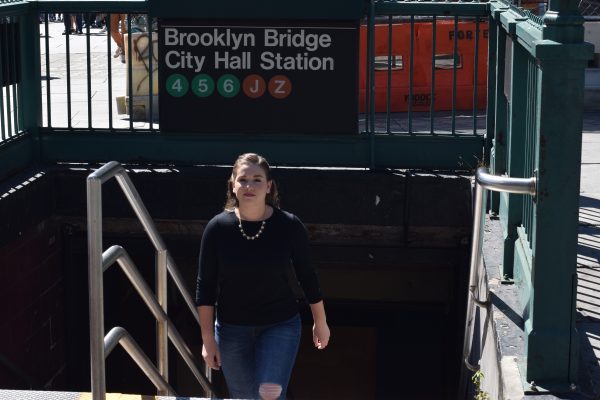 Poised and put-together, Michaela Finneran, Fordham College at Lincoln Center (FCLC) ’18, is the picture of an ideal future public official. In addition to her political science major, she has already had irreplaceable opportunities that will help her ascend the political ladder.

Recently, Finneran landed an internship in the New York City mayor’s office. Though she just started her position as an intern in the Community Affairs Unit and is unable, at this point, to grasp the entire impact of the role, she is very excited to see how this semester unfolds. “A lot of what I’ll be doing is organizing and training volunteers, and then, when I’m in the office, your basic data entry and follow up with constituents who have cases we’re working,” Finneran said.

She credits the bulk of her professional experience and the reason she was able to get this position to her previous internship. Last year, during her sophomore year, Finneran worked for Mercury, a public affairs firm at the World Trade Center. “I did a lot of briefings on public officials in foreign governments. That’s primarily what their client base tended to be, and I was there for all of last year, so I got a pretty wide range of experience from that,” Finneran explained.

“When I was working at Mercury, I worked a lot of client events, mostly for politicians. During primary season, I managed press at a televised meeting between Rev. Al Sharpton and Bernie Sanders in Harlem. Bernie was courting Sharpton’s endorsement. It was on CNN, MSNBC, ABC, etc. Pretty much everywhere. It was probably the coolest thing I did.” Initially, she had only planned to stay at Mercury for a semester, but was asked to stay on in November.

Finneran is also a research assistant for Christina Greer, associate professor of political science, from whom she feels she has gained valuable experience. Last year, she helped Greer research a piece she was co-writing for The Washington Post on the role of unpaid interns in presidential campaigns, something that is right up Finneran’s alley. For research, Finneran posed as a prospective intern and called each presidential campaign, asking questions about cover letter and resumé requirements and if they pay. “The answer to that was ‘no’ in pretty much every case, and I compiled a report for that, and that’s what they used as their research,” she said.

Finneran has performed several tasks for Greer as a research assistant and is very grateful for all of the opportunities she has directed her towards. “I’ve been pretty lucky,” Finneran said, “I have to say, pretty much every opportunity that I’ve had has come from Professor Greer. She knew someone at Mercury and knew they were looking for interns and suggested I look their way. Then, my experience at Mercury really helped me get my internship at the mayor’s office so I credit her for a lot of the things that I’ve been able to do.”

Finneran has always been “politics nerd.” In high school, she was on student council. She also went door-to-door campaigning for President Obama in 2008. “I can’t remember a time when I wasn’t interested in politics, and it’s weird because I didn’t intend to be a political science major until a month before I came to college…probably because my sister was a political science major, and I didn’t want to do what she did—I got over that pretty quickly as soon as I walked into Professor Greer’s class.”

“What always interested me in politics was the competition, messaging and strategy of campaigns. I know that this is what a lot of people hate about politics, the horse race aspect, but I find it exciting.”

Though neither of her parents work in politics, Finneran explained that she comes from a very politically-minded family. “My parents are on opposite ends of the political spectrum. My mom is a very liberal Democrat and my dad is a conservative Republican. They talked to me about politics from a very young age, and I was always intrigued.”

“I knew pretty early on that I identified more closely with the ideology of the Democratic Party, but most of my best friends are actually Republicans. I think this is important, especially going to a school like FCLC where I’m constantly surrounded by like-minded people.”

Finneran said, “Part of what we’ve lost in our current political system is the ability to negotiate. Elected officials, for the most part, are very strong partisans, which really cripples their ability to reach across the aisle. We all have our own opinions, but it’s  important to be able to find common ground and come to an acceptable compromise, in politics and in life. This is why I like having Republican friends.”

For students who are currently reading this piece and thinking they would love to have similar experiences, Finneran advises to send as many résumés as possible and, not surprisingly, “utilize your professors. They’re great resources and if they’re professors at Fordham, they probably have great connections within the city. Sometimes just having someone like Professor Greer who can speak well on your behalf can make the difference of you getting something.”

What does the future hold for Finneran? She hopes to become a political consultant and work on senatorial or presidential campaigns, and eventually go into public service herself. At the moment, she does not see herself going immediately to graduate or law school, as she’d like to spend a few years working first.