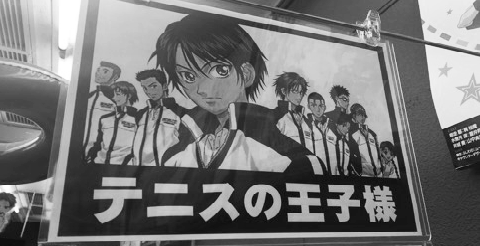 Steaming waves of summer heat fermented with moisture in the air, settling a fine layer of mist on the translucent umbrella I was holding. Seeing the world through this filter of dreaminess, Akihabara looked both fantastical and real at the same time— bridging the world we live in with the world people create.

As a country, Japan gave birth to Anime, Japanese cartoons with vivid graphics, lively characters and fantastical themes. The realm of Anime not only established itself as a true global phenomena, but also emerged as a booming industry of numerous supporters generating  a market value of roughly $181 million per year, according to the Association of Japanese Animation.

In Akihabara, a district of Tokyo that embodies the glories of Anime industries with the abundance of Anime-theme stores, I stood in the pouring rain. My feet were drenched, my hair was wet and my heart was heavy. With my other hand, I was holding a music album of TEZUKA Kunimitsu, the fictional character I grew up admiring. TEZUKA has always impressed me with his unparalleled determination in pursuing his dream, namely leading the tennis team of his school to the national championship. Having practically scavenged the entire town of Akihabara, I was so emotional when I got this album that I was in tears.

However, when the excitement and joy faded, I was left alone to confront a question: Since TEZUKA means so much to me, why do I always keep it a secret?

Raindrops lingered on the umbrella, shivered and fell to the ground.

Anime as an art form has gained popularity over the last decade, but it still has not generated as much cultural capital as some of the most historically-enriched forms of art. While some art forms are relatively obscure and unknown, members to the set of “High Culture,” such as works of Bach and Mozart, are empowered by the significance assigned by our culture. People hold them in the highest esteem, and the revered works’ prestige are usually proportional to their age.

While hobbies and interests are important for personal and intellectual enrichments, they are also handy hooks for social exchanges. When I subconsciously decide to talk with people more about Debussy than TEZUKA, I not only weigh pieces of information to share, but also unconsciously conform to the social norm of assigning values to arts, and leverage the revered status of western art music as my conversation capitals.

Furthermore, Anime is not the most popular and widely-represented interest. Some conceptions that the public has about people who watch Anime are actually inductively generalized from only a selected group of people. The stereotypes prevent people from truly getting to know those who enjoy the art form.  A friend of mine once made a bold generalization and mistook everyone who adores fictional characters to be attached to them romantically. When asked about the rationale, he said it’s “because he knows someone who does.”

But that’s not me, and certainly not many other Anime fans. I see TEZUKA as someone with admirable resilience and determination, and that is why he is someone I’d love to be, not be with. Recalling this experience, I came to an understanding that I didn’t want to avoid discussing TEZUKA, but avoid misleading labels that prevented people from getting to know me.

In fact, for many years I have regarded TEZUKA as my role model. His story of mental resilience and self-discipline inspired me. Extending his arms from the domain of fiction, at some levels, he guides me through the challenges of reality. The 2D world we pour our attention into is not only an intersection of imaginations and realities, but the unfolding possibilities of choosing a friend, embarking on a journey and experiencing in your life what would have been impossible.

I do appreciate the fact that I greatly benefit from the virtual companionship of TEZUKA. If it were not for the concerns of misunderstandings and leverages of cultural capitals, I would definitely be more open to sharing my passion for Anime with people the way I talk about Mendelssohn and his music with friends.

Tendencies to make generalizations and classify unfamiliar disciplines exists in the first place due to simply not knowing enough about the subject. The lack of information does not prevent people from their inherent curiosity to make sense of the world and their natural inclination to decide their feelings. In other words, provided sufficient information to Anime as an arts genre, stereotypes will melt into warm inquiries and brute classifications will evolve into genuine curiosities.

Days after, as the plane took off from the Kokusai Airport in Tokyo, I turned my head to the cabinet window trying to identify landmarks in Tokyo—and that’s when the view of Five Tennis courts struck me. The scattered buildings around a field track, reminded me of a junior high school, exactly like the junior high school in which TEZUKA dedicated his entire last year of junior high achieving his dream.

This is also where I finally became brave enough to try to understand myself and to start sharing my passion for Anime with people, embracing the magic box of possibilities along the way.

I fixed my eyes on the tennis courts until they disappeared. That’s the last bit of Tokyo that I saw from my trip, and it is something I’ll remember forever.