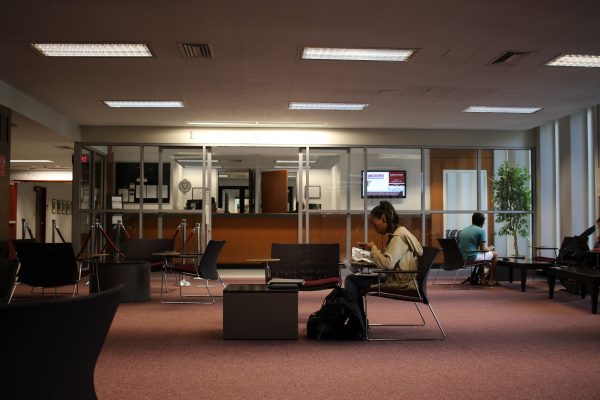 Jessica Toufayan, Fordham College at Lincoln Center (FCLC) ’18, spent the first half of August doing what most college students do at the time: beginning preparations for the fall semester.

Toufayan, however, had much more to worry about when she received an email from Student Financial Services on Aug. 17 with the subject line “Enrollment Cancellation.”

“We wish we were writing to you with better news,” the email began. “Pursuant to the communication sent to you on August 2, 2016 your courses for the fall 2016 term have been cancelled due to non-payment of your balance. Since you are no longer enrolled for the fall term you cannot reside in University housing.”

“I was crying,” Toufayan said. “I was saying ‘I’m not a student anymore.’ I wasn’t a student for a few days.”

Toufayan had her enrollment status and housing threatened by Fordham when she and her father did not submit a tax form—or K1—for one of her father’s businesses, leaving her FAFSA loan unprocessed and leaving an unpaid balance of $5,000 on her account.

The tax form, however, did not exist, because the business was out of commision. Despite notifying Fordham that this was the situation earlier in the summer, the University continued to ask for the tax form and notified Toufayan via email on Aug. 2 that she had an unpaid balance. After calling Fordham and resending the tax forms for her father’s other businesses, the issue appeared to be resolved.

As a result, Toufayan said that she was not expecting the Aug. 17 email. After further communication with the University, however, her schedule was restored and she was able to move into her dorm on time.

Students have said that these emails and their interactions with Student Financial Services in August left them frustrated, pointing primarily to issues regarding communication. Alumni have also said that they encountered similar issues during their time at Fordham.

“There’s a lot of real consequences to the family and to other families that we try to manage to,” Peter Stace, Ph.D., vice president of Enrollment, said.  “We’re really pretty good about working with families who reach out and work with us and that’s why the big window and the more threatening tone of the last letters, because in the end it’s like ‘okay I really can’t wait anymore and I need to do this.’”

Financial aid and bills began to be processed in April and bills were issued to students on July 5. On Aug. 2, those with unpaid balances were notified via email by Student Financial Services that if they did not resolve their situations through submitting missing paperwork or making payment arrangements by Aug. 16, their enrollment and housing would be cancelled. On Aug. 17, students who had not resolved their issues were notified via email that their enrollment and housing had been cancelled and that they had until Sept. 8, the end of the add/drop period, to resolve their issues before the cancellations became permanent.

“A majority of the students, when they get that letter saying they need so start getting things together, they do,” Giancarlo Annese, senior assistant director of Student Financial Services, said.

“We don’t take it lightly and we wait until the very last second before taking any action of this nature,” Terzulli said. He continued that he and Annese reviewed all of the notes left on students’ accounts regarding their situations before sending out the Aug. 17 email. Each of the cases is also “very carefully vetted” as the final deadlines draw closer in order to avoid sending a threat that is “unnecessary” or “unwarranted,” according to Stace.

The number of students receiving these emails is high because of timing, according to Stace.

“If we waited, there might be fewer students who got the letter, but there’s so much less time to do what needs to be done that folks wind up feeling like ‘Now all of the sudden I have to do these six things and there’s no time,’” Stace said. “So to avoid that sense of extreme pressure at the end, we start doing it earlier, which may touch more students, but each of them has more time to reach a resolution before anything bad is going to happen.”

Stace said, however, that between the beginning of April and the middle of August, “there’s a lot of water over the dam.”

“Sometimes people don’t peak to what they need to do,” he said. “Sometimes there are delays and misunderstandings for a host of reasons.”

Many of the situations that arose this summer had to do with timing and students waiting too long to address their situations, Stace said. “We have to have certain documents that if we don’t have, we can’t act.”

In the first weeks of August, Student Financial Services is dealing with the complexity of traffic and the urgency of the situations that arise, according to Stace.

“We set up teams to work with the students who are a part of this notification so we’re ready for what they’re going to bring,” he said. “So it’s not a volume issue. But if lots of people have waited up until the last day, you may run into time wait on the phone or that sort of thing.”

In some of these cases, more paperwork is needed than expected, according to Stace. “It’s like peeling an onion in some cases,” he said. “It’s like we asked for [a document] and now in light of you having provided that, we discover that we also need [another document], because we didn’t know before you told us. And that information has consequences that we then have to pursue.”

He added that the University is required by federal regulation to “reconcile any data discrepancies that appear.”

Students being frustrated by Student Financial Services is not isolated to this year.  In 2012, Jaime Rodriguez, FCLC ’14, had his enrollment threatened and was left  “effectively homeless” for two months.

The summer before his junior year, Rodriguez was planning to move off campus because the scholarship he received would apply the money he would have used for university housing to his off-campus housing. He therefore did not enroll in student housing and in early August signed the lease for his apartment and had his roommates situated.

Shortly thereafter, however, Rodriguez received an email from Fordham stating that they did not have his mother’s tax returns, even though he had sent them in April.

“So I was kind of freaking out because I did not enroll in student housing and I had this plan to move off campus,” he said. When he went to the scholarship agency, they said that they had not received a verification letter from Fordham. This situation left him without housing for the first two months of his junior year, during which time he slept on people’s couches and snuck into dorms.

“I was risking disciplinary action,” he said. “I’m just really lucky for all of the Fordham students in my year and other classmates taking care of me in my time of need. That’s what kept me focused.”

Rodriguez, however, was still able to attend his courses. Until the end of October, he did not receive a refund check for his housing and had an outstanding balance of $25,000, leaving him in a “limbo stage.” When the scholarship paperwork was taken care of, Rodriguez was able to get an apartment.

While none of the other students interviewed were left without housing due to paperwork issues with the University, their frustrations were similar.

One student, who wished to remain anonymous, received the Aug. 17 email because she did not pay her bill by the Aug. 16 deadline. She was instructed by the University to not pay until her financial aid awards were processed, which did not become available until Aug. 18. When she paid her bill after her awards became available, she was charged a $500 late fee, which was later refunded to her.

“It’s not the practice of the University to impose a late fee on folks who are late because of something we didn’t do,” Stace said.

The student said that throughout the process “it took a ton of time to get a hold of somebody” when she called Financial Services. She also said that “email coordination was terrible” and would not get responses for one to two weeks in some cases.

The student attributed some of the issues to the students working at the Office of Financial Services.

“I feel like it’s hard to yell at them because they’re also college students and they’re doing what they’re told, but they’re also messing up things and promising things that they can’t honor,” the student said.

Nadia Semmar, FCLC ’18, an RA in McKeon Hall who is being incorrectly charged over $2,000 for a meal plan—which is supposed to be free to all RAs and RFMs—had similar criticisms of the students working at Financial Services.

“They are not helpful to the students,” Semmar said. “I feel like they’re not prepared to help the students and they keep saying ‘don’t worry we’ll do it’ and they don’t and it just feels like they’re just waiting for me to forget about it and go away.”

The student workers at the Student Financial Services offices are trained by sitting with full time employee to go over the calls that come in and common questions, such as inquiries about balances and missing paperwork, according to Terzulli. “A vast number of calls we receive are straightforward.”

Vincent Kappel, FCLC ’18, another student who received the Aug. 17 email, took out a $28,000 loan in order to pay his balance. He is appealing his financial aid package and was notified by Fordham on Aug. 16 that they were missing paperwork for a scholarship he was receiving from an outside organization. Kappel, however, said that he had contacted the University prior to Aug. 16 about his financial situation after he received the Aug. 2 email.

“Of course we’re all supposed to be treated as adults,” Kappel said. “It’s college. To a certain extent it’s our responsibility to make sure that Fordham has what it needs.”

“But it’s also Fordham’s responsibility when it comes to a point that they need to reach out and tell the students what they need to submit,” he continued. “Because I don’t know what I need to submit. I’m not a tax expert. I did all of the paperwork myself and that’s because I was calling and asking. It shouldn’t be that way.”

“I do believe that the students need to take a little bit more ownership of their loan process, their financial aid process, all of the taxes and missing information,” Junior Class Dean Milton Bravo said. “But I think the students could also hold accountable the people that they interact with from these offices. Write down the names, write down the days and the times that you’re speaking with them.”

In order to avoid these situations, Stace advised students to “respond earlier, rather than later to what’s being asked for. And if you see a problem over the horizon, don’t wait to get there.”

“If there is some situation that is unique to the student, it’s really important that they come in and talk to us about it,” Terzulli said. “The more time you give yourself, the better chances you have of being able to make all of the arrangements before it gets to the consequences.

While students such as Toufayan had their situations resolved, she encountered one more issue during the first week of the semester: there was a hold on her registration portal because of the same non-existent form for her father’s out of commission business. The issue was resolved once she contacted the University.

“You can’t make mistakes in an office that is that important to the University,” Toufayan said. “You just can’t.”