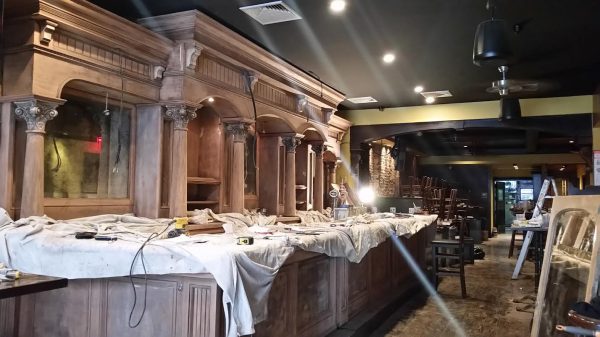 Fordham Lincoln Center (FLC) students are in for a year of reinvented dining options. With the opening of Argo Tea and the change in food service providers, on campus new dishes will compete for the students’ attention.

The new school year will also bring about a new beginning for beloved food chain, Empanada Mama. The restaurant’s Hell’s Kitchen location used to be a hot spot for FLC students, until a fire shut it down in late January. The Ninth Avenue spot constituted the restaurant chain’s second Manhattan location, the other one located near the Williamsburg Bridge. This summer, it found a new home at 765 Ninth Ave, between 51st and 52nd street. It will replace the sports bar “Cannery.”

Stuart Bragg, manager of the relocation, hopes the doors will open in the first week of November. “We are very eager, but we are at the mercy of the city,” he said. The opportunity to move to the new location came at the beginning of the summer. According to Bragg, the food chain had been looking to open a third restaurant since before the fire. Now, the main focus is rebuilding their second one. After getting their liquor license transferred, the next steps are gutting the basement, stripping the floors down and adding in a brand new kitchen.

The new location will be three times the size of the old one and unlike before, the restaurant will accept reservations and host small parties. It will be open 24/7 and will feature two screens and a bar. “It really is about both the food and the people,” Bragg said, adding that it will be “a comfortable place, where you can sit down and have a meal for under $15.” As for the old location right next door, the plan is to create an order pick-up spot. In the meantime, students will be claiming their to-go orders at a temporary spot in the front of the restaurant.

After the fire earlier this year, students took to social media to express their grief. For Chris Madeira, Fordham College at Lincoln Center (FCLC) ’18, it was a preferred dining option, ever since the beginning of his freshman year. “It was one of those places where if someone suggested to go, you would grab your bag and be ready to head out,” he said. “I would go with people I’ve just met or to hang out with friends.” Madeira believes the new dining options on campus will not replace the nearby restaurants. “You don’t go out to eat because you don’t have options on campus,” he said, “you go out for the sake of it.”

Alex Rebosura, FCLC ’18, agrees. “I think the new dining hall will affect the quality of our food during the day. Sometimes I’ll grab a quick dinner, but most times I’ll still want to dine out at night.” She believes the reopening will “make a lot of people happy.” During the past school year, she would enjoy their cuisine a few times a month. “When I realized how close it was, I stopped ordering empanadas online,” she said. “There’s no place around that serves them in the same way. It was one of a kind.” As for the new food on campus, Rebosura believes it serves a different purpose, that of quick and available meals for when time is scarce.