CMS Cuts Ties with The Observer: Timeline of Events 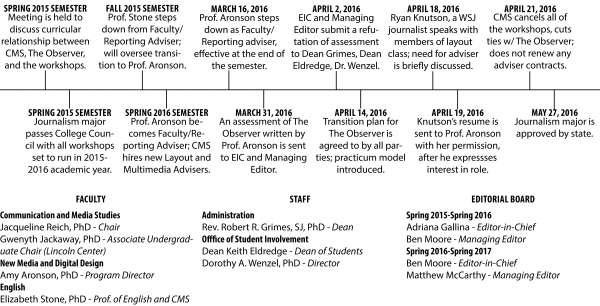 When the CMS department decided to cut ties with The Observer, we were foremost concerned with how we could report on the story, given our direct involvement in the events. We ultimately came to the decision to move ahead with our coverage, after continuous conversations involving our editorial board, our adviser and a number of journalism professionals, as the Fordham community deserves to know the full account. The following pieces reflect our efforts to do so in a comprehensive, accurate and impartial manner.

Spring 2015 Semester – March 16, 2016
As Fordham began to develop plans for a journalism major, key members of the Communications and Media Studies (CMS) department and representatives from The Observer held a meeting during the spring 2015 semester. The two groups discussed the curricular relationship between CMS and The Observer as well as the practicality of the journalism workshops offered by The Observer through CMS. CMS cited the number of students attending the workshops as an issue, because many students audited the workshops rather than officially registering for them.

Later that semester, College Council approved the new journalism major. The Observer workshops were set to run in the 2015-2016 academic year; however, the council did not discuss the status of the workshops in the meeting to approve the new major.

Months later, during the fall 2015 semester, Stone announced she would step down as faculty and reporting adviser for the reporting workshop and would help transition Aronson into the role for the spring 2016 semester. Aronson attended the last two editorial board meetings of the fall semester to prepare for her new position. During the spring 2016 semester, in addition to  Aronson fully taking on the faculty adviser role, CMS also hired two new advisers for the layout and multimedia workshops.

Three months into the semester, Aronson announced she would step down as the faculty adviser at the end of the semester.
March 31 Assessment
Two weeks after announcing her resignation, Aronson compiled an assessment of The Observer as requested by Reich. In the assessment, Aronson claimed that the structure of The Observer “no longer serves Student Activities nor the CMS curriculum well.” She believed that the syllabi of the workshops were vague and depriving students of achieving major learning objectives.

Two days later, Gallina and Moore, with assistance from the editorial board of The Observer, submitted a refutation to the assessment to Grimes, Eldredge and Wenzel. They refuted what they thought was inaccurate information in the assessment, including the analysis that The Observer no longer needs curricular support in the form of journalism workshops, as well as the idea that the editorial board favored a practicum to replace the workshops.

Four days later, Ryan Knutson, a journalist for the Wall Street Journal, spoke to the layout workshop class as a guest lecturer. After the class ended, Knutson spoke to members of the class, including Gallina, then-editor-in-chief of The Observer.

After discussing The Observer’s need for an adviser, Knutson expressed interest in the role. Gallina then approached Aronson about her conversation with Knutson and subsequently asked for Knutson’s resume with approval from Aronson. Aronson then forwarded Knutson’s resume to Reich.
April 21: Cut Ties
In an email, Reich provided an update on the relationship between CMS and The Observer. She notified all parties involved that CMS would sever all ties to The Observer effective at the end of the semester. She explained the separation was due to certain parties “not abiding by the parameters of our compromise, outlined in [her] April 14 email to the group, specifically related to the staffing of the Journalism Workshop courses.”

The April 21 email also expressed optimism for the future of both CMS and The Observer. Reich “hope[s] that someday Student Affairs and CMS can work together to help create mutually beneficial and productive co-curricular experience.” However, due to the cancellation of the workshops, none of the advisers’ contracts were renewed for the 2016-2017 academic year.

On May 27, a month after CMS cut ties with The Observer, Fordham’s new journalism major was approved by the state of New York.

Following its split from CMS, The Observer was able to secure enough funds to bring in two advisers for the newspaper and organize independent workshops in place of the cancelled courses.