Aramark Takes Over as Food Provider 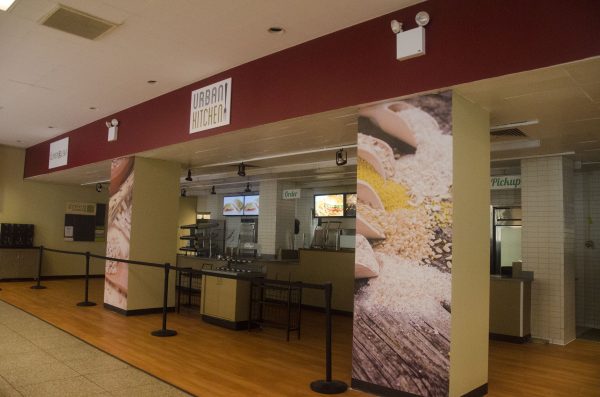 “Aramark has hired all the union employees who wanted to return,” Sandy Pope, business manager of Teamsters Local 810, the union which represents the dining service employees at Fordham University, said.

“We have agreed to a collective bargaining agreement which is the same except the retirement provision which the union leadership and committee will be recommending to accept,” she continued.

“All previous employees who applied for positions with Aramark and passed background tests were hired with their rank, seniority, salaries, and health benefits maintained as they were,” Karen Cutler, VP of Corporate Communications for Aramark, said in an email statement to The Observer.

Pope noted that the transition from Sodexo to Aramark “has been rocky, but mainly because of the short timeline to accomplish a lot.” Aramark was announced as the university’s next dining service provider on April 18 and took over dining service operations on July 1.

“Management has been cooperative with the union,” she continued. “We are still working out some bugs, but we’re confident everyone will be satisfied with the outcome.”

“The members and leadership of Teamsters Local 810 are very thankful for all the support we received from the Fordham community of students, faculty and administration to insure that everyone’s jobs were saved, and that the employees not suffer a loss of wages, benefits or working conditions,” Pope said.

Regarding changes already being made at the Lincoln Center campus, “Aramark has been working to increase the variety, value, quality, and convenience of dining options,” Cutler said.

Many of these changes took place at the Ram Café, where Aramark has expanded the menus “to include more healthy and gluten-free options with the introduction of our Clover Leaf and Jamba to Go real fruit smoothies,” according to Cutler. The Clover Leaf is “like Boston Market entrees,” Deming Yaun, Fordham University’s dining services contract liaison, said. A F’Real self-serve milkshake machine has also been added and the mural has been removed, according to Leighton Magoon, FCLC ’17 and president of USG.

Additionally, the Ram Cafe now includes Aramark’s Urban Kitchen grill concept and all of the beverages have been consolidated into “one streamlined beverage counter to the right as you walk in,” according to Yaun. He also said that there is “a healthy amount of grab and go” and the cashiers have been repositioned.

An Argo Tea will also open in the 140 W. building on August 29, according to Cutler. She said that the new venue will feature “delicious signature beverages and loose-leaf teas,” in addition to pastries and paninis.

Schmeltzer Dining Hall will also feature the introduction of the Olive Branch, “Mediterranean-themed dining that will provide even more variety and healthy options to students on campus,” Cutler said. She also noted that the Community Dining Hall will offer “lower calorie choices; vegan, vegetarian, and whole grain options; seasonal fresh fruits and vegetables; and a variety of whole foods that are raised, grown, harvested, and produced locally and in a sustainable manner.”

She encouraged diners to use Aramark’s “Your Voice Counts” program, which “allows all diners to provide us with in-the-moment feedback online or via their mobile device.”

The Bon Mi and the coffee kiosk in the Law School will both remain open, according to Yaun.

Cutler also said that entrees and sides from Clover Leaf in the Ram Café will have set prices, rather than by-the-ounce pricing. She continued that meal plan pricing has not changed and “on average, retail pricing will be in line with both the previous provider and the local market.”

Regarding future plans for dining services at Fordham’s Lincoln Center campus, Yaun said “There are those who are looking for a larger renovation of the Ram Café and we need to work closely with student government and the food committee down at Lincoln Center to determine exactly what that will be.”

“The thought is, can we get that rolling for renovations in Summer 2017 or will it be some time beyond,” Yaun said. “I think it’s a matter of deciding what students are actually looking for over there.”

And what can the Fordham community  expect from the food?

“I have had the food, and I will say that I am very happy about it,” Magoon said, adding that the bread and the coffee are both “very good.”

“If they continue down that road, then I think that Aramark will have a great first impression and a good introduction to Fordham at both campuses,” Magoon continued.

“And then the number one thing that I was looking for, and I know student leaders and some staff that I know were looking for was—our favorite item that Sodexo would always serve would be the sugar cookies,” he continued. “And I have had Aramark’s sugar cookies. And I’m not lying when I’m saying they are better than the Sodexo sugar cookies, which is something I didn’t think anybody could beat. So I’m very happy about that.”