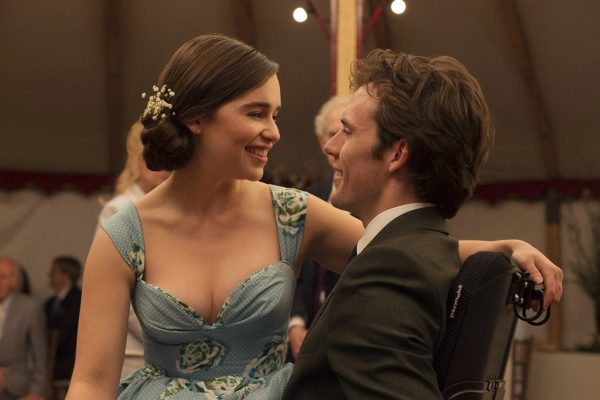 Sam Claflin and Emilia Clarke star as Will Traynor and Louisa "Lou" Clark in "Me Before You." (Alex Bailey/Warner Bros. Entertainment)

Louisa Clark is at a standstill—she just lost her job and is in a long-term relationship with an inattentive boyfriend that pays more attention to the asphalt he runs on than her. Despite being the oldest child, she is forced to live in a windowless closet for a bedroom, as her younger and more successful sister inhabits the biggest room in their parent’s house with her son. This is enough to make anyone have a bad day, and Louisa is no exception.

On the other side of town, Will Traynor, a young, adventurous and good-looking socialite, used to have it all. He was living the dream until an automobile accident left him confined to a wheelchair and unable to move from the shoulders down. These are the situations the main characters face in British author Jojo Moyes’ critically acclaimed breakout novel, “Me Before You.”

First published in 2012, the 480-page novel has spiked in popularity in recent months due to the impending release of an adapted major motion picture. Starring Sam Claflin, best known for his role as Finnick Odair in “The Hunger Games” series, opposite Emilia Clarke, the “Game of Thrones” dragon queen, the movie adaptation of “Me Before You” will be released on June 3, just in time to kick-off summer vacation.

Readers can pick up a copy of “Me Before You” to embark on Will and Louisa’s complicated journey before seeing the film. Their voyage starts off rough—in a desperate, last-ditch attempt to find a job, Louisa (nicknamed Lou) accepts a temporary position as a caretaker for Will. Quirky, clumsy and lively, Lou is the complete opposite of Will, who is angry, depressed and has seemingly lost his will to live. Initially, any sort of friendship between Lou and Will seems highly unlikely. Good intentions are met with snide, sarcastic comments and any hint at friendship is immediately shoved aside. It appears that Will is content living in misery and self-pity, dwelling on the fact that he can no longer lead the same life as before the accident.

After several weeks with the Traynors, Lou finally has a breakthrough moment with Will, marking the beginning of a rocky, budding friendship between the two. In her six months of employment, she manages to take Will on a journey, both physically and emotionally, that no one in his life thought was possible. Through laughter and tears, emotional revelations and screaming matches, Moyes pens more than just an unlikely and complicated love story—she creates a novel about bravery and overcoming life’s obstacles.

Although Lou’s plan is to take Will on a trip to change his life, it turns into a journey for both of them; Will learns to love and enjoy life again, while Lou begins to realize that there is a whole new world outside the confines of her small town. Louisa has never truly lived—it takes Will, someone who is no longer physically able to live the daring life he used to, to teach her the value of adventure.

Moyes writes in a way that makes the reader feel as if they are a part of the action. Readers stand alongside Will and Lou instead of just reading about their journey. From the moment readers pick up the novel, they are taken on a roller coaster ride of emotions, experiencing tense family fights, laugh-out-loud humor and unconventional (and at times awkward) romance… sometimes all within the span of a single chapter. Although the novel is on the long side, the book reads easily and smoothly, as if Moyes is having a direct conversation with the reader through her written words.

Judging by the two sob-worthy trailers currently released, it seems that the new movie will follow the text of the book closely. Moyes had a prominent part in the making of the film, as she wrote the screenplay. This should ensure that the new movie does not stray too far from the original text, a complaint many book lovers have about film adaptations of their favorite novels. Before heading to the theater this summer, relax by reading “Me Before You,” so that you, too, can fully experience the love and tragedy of life at Granta House.