Broadway Takes Over St. Paul’s Church For One Night Only 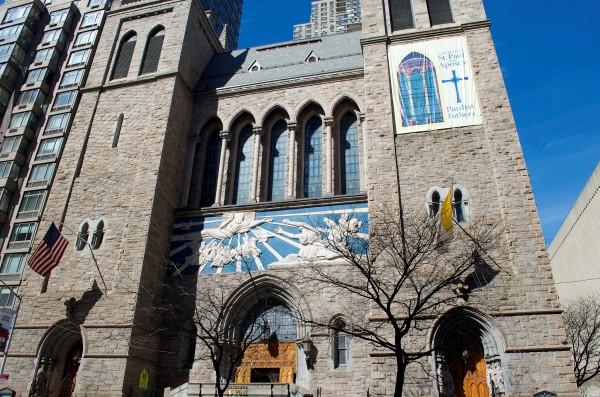 The "Broadway Goes to Church" event begins promptly at 7 p.m. on May 2. (PAULA MADERO/ THE OBSERVER).

When looking for fun musical events to attend near campus, Fordham Lincoln Center students may often look north to Lincoln Center for inspiration. However, on Monday, May 2, students should turn and look south towards the Church of St. Paul the Apostle. Fordham’s  neighbor is hosting its own musical soiree, “Songs of Hope: Broadway Goes to Church” for one night only, just in time for a relaxing break before finals. With tickets only $10 per person for students, the church’s star-studded lineup, which includes Tony Award winner Lillias White and current “Fiddler on the Roof” star Jessica Vosk, is sure to dazzle the audience with amazing vocals while raising money for charity.

Kicking off promptly at 7 p.m., the live benefit concert is raising money for St. Paul’s music program for emerging artists. According to the benefit’s website, the purpose of the concert is to “bring cities across America some of Broadway and New York’s best talent to celebrate, empower and touch people through personal stories of hope and triumph coupled with the most inspiring music ever written from Broadway and beyond.” Students can expect to hear songs from their favorite Broadway shows, including “Wicked,” “West Side Story,” “Kinky Boots” and “Avenue Q.”

This year’s festivities are hosted by the duo of Will and Anthony Nunziata, brothers who sing, write, do improv comedy and advocate for the inclusion of arts in education. When they are not performing, the brothers control their own ARTS MATTER! Educational Outreach Program which aims to help aspiring singers and actors from elementary school to the college level attain their goals in the arts.

Broadway vet and Tony Award nominee Liz Callaway will also be gracing the stage at St. Paul’s for the charity event. Callaway, who made her Broadway debut in Stephen Sondheim’s “Merrily We Roll Along,” received great acclaim for her roles as Grizabella in “Cats” and Lizzie in “Baby,” for which she received a Tony Award nomination in the Best Performance by a Featured Actress in a Musical category.

However, Callaway is more than just a Broadway powerhouse—she is an Emmy Winning actress and Academy Award nominee. She received her Emmy for her work as the host of “Ready to Go,” a live children’s program on CBS. Her Academy Award recognition arose from her musical work on the animated children’s film “Anastasia.” Callaway has also appeared as the singing voices for characters in many other children’s films, including Jasmine in Disney’s “Aladdin and the King of Thieves” and Kiara in Disney’s “The Lion King II: Simba’s Pride.”

Lillias White and Cady Huffman, two Tony Award Winners in the Best Performance by a Featured Actress in a Musical category, will also lend their musical talents to the event. White, a Brooklyn native, first received notoriety in 1987 for her role as Effie in the revival of “Dreamgirls.” Ten years later in 1997, White won the Tony for her performance as Sonja in “The Life,” a musical about the nitty-gritty side of life on 42nd Street in the early 1990s.

Huffman originated the part of Ulla in “The Producers,” winning the Tony Award for her portrayal in 2001. Besides her expansive list of Broadway roles, Huffman also has many film and television credits to her name. She has starred in everything from “Law & Order: Criminal Intent” to “The Company Men” alongside Ben Affleck and appears as a regular food judge on “Iron Chef America.”

Current Broadway performer Jessica Vosk rounds out the cast for the event, making the tedious seven block journey to St. Paul’s from the Broadway Theatre on 53rd Street, where she stars as Fruma Sarah in the revival of “Fiddler on the Roof.” Vosk has previously appeared on Broadway in “Finding Neverland” and “The Bridges of Madison County.”

Student tickets for the event can only be purchased in person at the Welcome Center of the Church of St. Paul the Apostle. To find out more information about the Broadway Goes to Church initiative and buy regular or premium tickets, head over to the event’s website: www.broadwaygoestochurch.com.