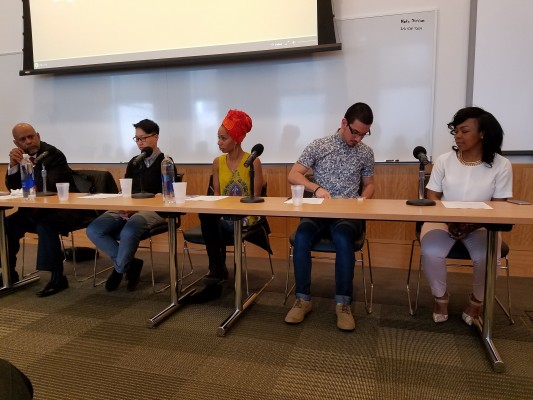 Panelist discuss what it means to be anti-racist. (PHOTO BY PARDEEP CATTRY/THE OBSERVER)

Fordham’s Racial Awareness Collective for Everyone (R.A.C.E.) presented the panel “Being Anti-Racist” at Fordham University’s School of Law, which was co-sponsored by the New York City chapter of the National Association of Social Workers (NASW-NYC) and the Undoing Racism Internship Program.  The panel, which took place on Saturday, April 9, discussed how to actively end the systemic racism problem that exists in the United States.

The event began with a definition of the term “anti-racist” through a video from The Guardian starring Marlon James, a Man Booker Prize-winning author.  A person who is “anti-racist” is active in his or her beliefs, instead of just being a “non-racist,” a person who is not racist but does not do anything else to back up his or her moral stance.

Following the introduction, the panel, which was moderated by Fordham Graduate School of Social Services 10(GSSS) graduate and NASW-NYC President Elect Candida Brooks-Harrison, began discussions on their definitions of being “anti-racist.” The panelists then shared personal experiences about confronting racial tensions.  Panelist Brian Romero, a licensed social worker and part of NASW-NYC, made his distinctions between non-racists and anti-racists, saying “non-racists are social justice advocates,” but anti-racists “understand that this country, and the way it operates, is led by race.”

Fellow panelist Lyneisha Dukes, a Bachelor of Social Work student at GSSS, revealed that she transitioned into being an anti-racist after being part of a “heated discussion” in one of her classes.  “I voiced my opinion, but in the back of my mind, I’m also like, ‘I don’t want to be that angry black girl,’” she said.  Afterward, someone told her that she should be careful when saying those types of things to a white person, and Dukes decided to become more active in her beliefs.

“I think it was important for me to meet other people, gain that analysis, and then work with a group here on campus to bring to fruition an equitable campus,” she said.

Panelist Nzinga-Christina Reid, the CEO and founder of Black Diaries, Inc., focused some of her comments on systemic racism in a school setting.  “You, as students, have the power,” she said.  “If something is not right in your university, being anti-racist means that you can collectively say something if you organize your student body to come up with a solution and hold your school accountable when they are not catering to your needs,” she added.

In any setting, the panelists agreed that building relationships and finding allies is key.  “Before we can start talking about anti-racism,” Romero said, “and how we’re going to infiltrate all these systems, we really need to get to know each other.”  When relationships are created, Romero added, “there’s not a defensiveness that sometimes pops up.”

Before closing the event, which was NASW-NYC’s first of the type, moderator Brooks-Harrison opened the floor to questions from the audience.  The panelists were asked for specific advice on topics involving white privilege and how people with that type of privilege should act in certain scenarios.  The answer, from moderator and panelists, was for those in positions of privilege to not stand ahead or behind their equivalents of color, but to stand beside them, preaching equality.