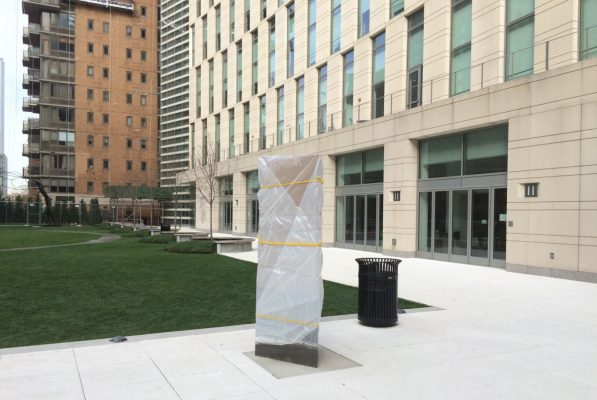 On April 14, Leighton Magoon, president of United Student Government (USG) and Fordham College at Lincoln Center (FCLC) ‘17,  signed a resolution recommending that the University retains both the name of the Robert Moses Plaza and plinth dedicated to Moses. The resolution was co-signed by Yint Hmu, president of the USG Senate and FCLC ’17.

“We’ve been having conversations with faculty and students for a few months, and we decided after the Robert Moses event [on April 6], it would be beneficial for the Fordham community for the plinth to remain on the plaza,” Hmu said.

“By having the plinth present on the plaza, the Fordham Lincoln Center student body, current, past and future, can engage in substantive dialogues about Robert Moses and his effects on both this campus and New York City as a whole,” the resolution reads.

“What USG felt after that event on the history of Robert Moses was that keeping the plinth on campus while simultaneously having an engraving or plaque that acknowledges the communities affected by [Moses’] urban planning would be most appropriate,” he continued.

Magoon stressed the point that this would further dialogue between members of the Fordham community. “It still encourages dialogue about what was on our campus before we got here,” he said. “It highlights the history of the campus while also reminding us of the human effect.”

The resolution also states that USG recommends that “an additional plaque or engraving be placed on the plinth. Such a plaque would acknowledge the many communities that were displaced by Robert Moses through his urban planning.”

Hmu stressed that this did not mean ignoring the controversial impact Robert Moses had on minority communities throughout New York City. “Without him this campus would not exist at all, but we need to recognize the negative consequences of his actions as well,” he continued.

“Since this is an academic community, we thought it would be best to keep it up to continue to educate students. If we were to remove the plinth, we’d just be sanitizing history,” Hmu said.

The USG Against Racism Committee, chaired by Hmu and Daniel Wilson, FCLC ’17, intends to make this plaque a priority. “Our next focus will be to get the plaque on [the plinth], and have a fruitful debate on the language on the plaque. We will be consulting multiple groups on campus to do this as well,” Hmu said.

“We’d reach out to the Dorothy Day Center, USG Against Racism Committee and any other members of the Fordham community interested in working on the wording. We know it has to be appropriate and respectful in addressing the communities that were affected [by LC’s construction],” Magoon said.

According to Magoon, USG is waiting to hear back from administrators on the proposal before they move forward. “If the next step for us is deciding what the wording is, it is important because the writing on the plaque would likely be here for many decades to come, so we understand the importance of the wording of it.”

The resolution is already being shared with the University community, including members of Fordham President’s Cabinet. “We’ve sent it to a member of Father McShane’s cabinet who responded almost immediately, thanking us for our hard work, and he guaranteed that it would be brought to the attention of the President’s Cabinet.”

The Fordham President’s Cabinet consists of Rev. Joseph McShane, S.J., president of Fordham University, Stephen Freedman, Ph.D., provost, and a number of senior vice presidents and vice presidents that oversee most offices and administration of the University. “McShane was aware of the discussions around the plinth, and he has been wanting to hear what student reaction would be on it,” Magoon said.