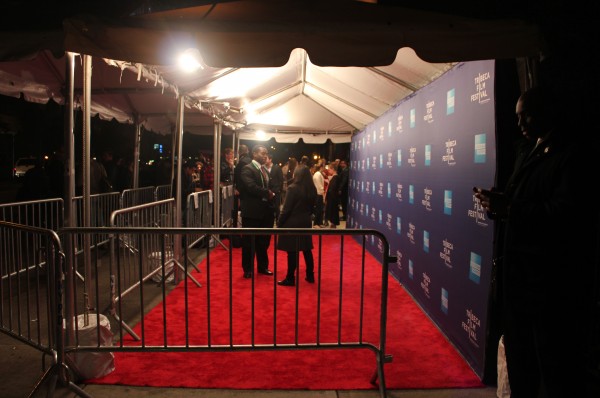 The festival runs from April 13 -24 and will feature movies, TV shows and various panels. (SOFIA ALVAREZ/ THE OBSERVER)

Founded by Robert De Niro, Jane Rosenthal and Craig Hatkoff in the wake of 9/11, the Tribeca Film Festival is New York City’s most popular film event of the year. Every spring, world-renowned and up-and-coming directors, producers, screenwriters and actors convene in the Triangle Below Canal Street to celebrate, analyze and explore cinema. This year, Fordham College Lincoln Center (FCLC) offers a simple guide to getting a front row seat.

Festival passes range from $550-$1,250 offering access to special screenings, parties and galas, panels and other events. An enticing offer if it’s in your budget, but for the frugal college spender and film enthusiast, $500 tickets may be out of your price range. Luckily, there’s a more affordable way to attend the festival by purchasing individual tickets to each screening and event.

Eveninging/Weekend: $20 after 6 p.m. Monday to Friday, and all day Saturday and Sunday

What To See: “The Ticket,” entered in the US Narrative Competition, stars Dan Stevens (“Downton Abbey”), Malin Akerman (“Couples Retreat”), Oliver Platt (“Chicago Fire”) and Kerry Bishe (“Halt and Catch Fire”), and is directed by Ido Fluk. Fluk’s first American film, “The Ticket,” tells the story of a blind man who regains his sight only to be blinded by the materialism of the world. (April 16, 8:30 p.m. at SVA2, April 18, 9 p.m. at BTC7 and April 23, 6 p.m. at  BTC7)

What To See: “Starring Austin Pendleton,” co-produced by Christina Bennett Lind, FCLC ‘05. “Starring Austin Pendleton,” entered in the documentary short competition, follows Austin Pendleton as he recounts his career as an actor, playwright and director and explores his artistic reach as the “quintessential character” via interviews with the numerous artists he’s worked with through the years on what it means to be original. The April 21 screening at SVA Theater 2 Beatrice will be followed by a talk-back with Pendleton and friends including Denis O’Hare (“American Horror Story”),  Olympia Dukakis (“Moonstruck”)  and directors David H. Holmes and Gene Gallerano. (April 21, 2:30 p.m. at SVA2, April 21, 2:45 p.m. at RGL10-11 and April 23, 3:30 p.m. at BTC6)

Join in conversation with directors, producers and actors on various topics ranging from auteurism with Baz Luhrmann and Nelson George to songwriting with Idina Menzel.

What To Attend: Daring Women Summit, for women in the entertainment industry and those who support them, is powered by TheLi.st and lauds the cinematic arts’ creative female minds. Speakers include Samantha Bee (“Full Frontal”), fashion designer Donna Karan, actress and producer Olivia Wilde and Google Entertainment Industry Educator in Chief Julie Ann Crommett, among others. (April 20, 10:30 a.m. and 5 p.m. at Hub)

It isn’t all about movies at this film festival; television gets some screen time too.

What To See: Sneak peaks of season finales and premieres include Comedy Central’s Season 3 finale of “Broad City,”  with appearances by Ilana Glazer and Abbi Jacobson (April 17, 4:20 p.m. at Hub), Netflix’s Season 2 premiere of “Grace and Frankie”  and conversation with stars Jane Fonda and Lily Tomlin (April 14, 5 p.m. at SVA1) and AMC’s “The Night Manager” with a conversation with Tom Hiddleston and director Susanne Bier (April 15, 3:30 p.m. at SVA1).

Presented by AT&T and sponsored by the New York Times, “Storyscapes” celebrates the groundbreaking advancements of modern storytelling that utilizes cutting edge technology to bring cinema to life.

What To Experience: “Network Effect,” created by Jonathan Harris and Gregor Hochmuth, is not a movie, but a virtual reality based “unnerving experience” of the subtle and not-so-subtle psychological effects of the internet and world wide web on humankind. Comprised of countless tweets, lists, video clips and spoken sentences—viewers are subjected to the overly-stimulated ramifications of the internet on their daily lives–can you handle the effects of internet? (April 14, 12 p.m., Hub)

To experience this year’s Tribeca Film Festival, tickets can be purchased in person at Bow Tie Chelsea Cinemas 9, the primary ticket outlet, online or via the Tribeca Film Festival call center 646-502-5296. Rush tickets are offered for most screenings and events pending availability. Limit one rush ticket per person. For more information, visit tribecafilm.com.