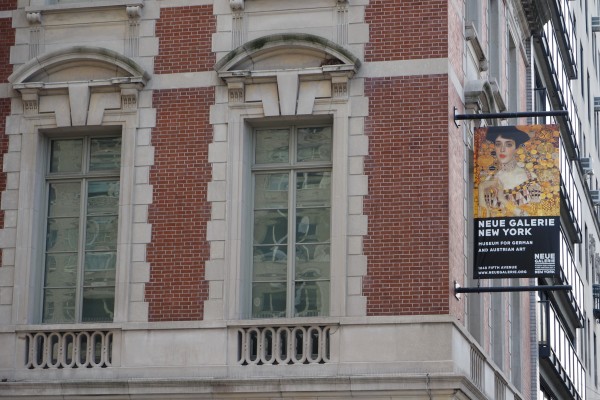 The Neue Galerie is located on 5th Ave between 85th and 86th street. (COURTESY OF JOHANNES ORTNER VIA TNS)

As final exams and graduation briskly approach, students all over Fordham College Lincoln Center are panicking—rapidly trying to study for finals, finalize summer plans and figure out their living situations for the fall. While the default reaction for many is to break down and scream away their frustrations, the Neue Galerie is offering a different solution this spring—viewing someone else’s despair. Temporarily, stressed students or art enthusiasts can view Edvard Munch’s “The Scream,” in which a figure is permanently in a state of existential dread.

For a limited time only, the Neue Galerie is housing the painting as a part of its “Munich and Expressionism” exhibit. Curated by expressionist scholar Jill Lloyd, Ph.D., in partnership with The Munch Museum of Oslo, Norway, the exhibition focuses on Munch’s influence over other German and Austrian artists, as well as their influence on him. These artists, which include German artists Max Beckmann and Ernst Ludwig Kirchner and Austrian artists Richard Gerstl and Egon Schiele, all explore similar dark themes to Munch, including human vulnerability, sin and alienation.

Comprised of more than 80 pieces of artwork from both private and public collections worldwide, the exhibition is divided thematically across four rooms. The theme of each of the rooms differs dramatically, with one being devoted to a battle of the sexes, while another focuses on the explorative nature of adolescence.

“The Scream” is the most well-known piece of art by Norwegian painter Edvard Munch. Not as well-known about the painting is that it is part of a series of four art pieces—either composed with paint or pastel mediums—created by Munch between 1893 and 1910. Collectively, all four artworks are titled “The Scream;” each does not have an individual title, but is slightly different than the others in the collection.

Previously in a private collection, this is only the second time this version of “The Scream” has ever been displayed publicly in New York City. Briefly, it was the most expensive piece of art ever to be purchased at an auction—it sold for a whopping $120 million dollars in 2012. That same year, the Museum of Modern Art was leant the piece to display for a short time before the new anonymous owner reclaimed it for his personal possession. Now, after a little traveling, the piece is on display in the city again.

Located right past the Metropolitan Museum of Art on 5th Avenue between 85th and 86th street, the new exhibit will be open until June 13. The museum is free to visit between 6 -8 p.m. on the first Friday of every month, otherwise it has a fixed price of $10 for students.