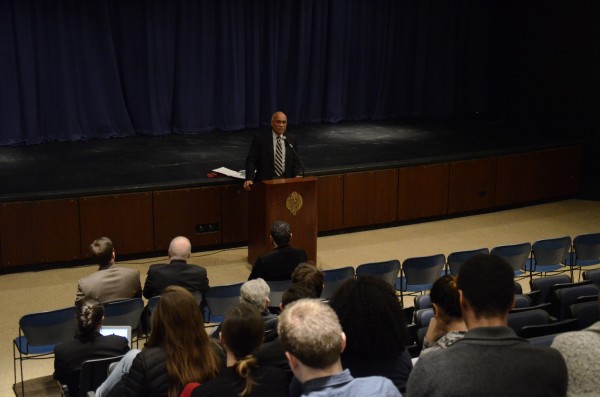 Peter Vaughan, chair of the President's Diversity Task Force, which issued recommendations to the university last November, including the recommendation of appointing a Chief Diversity Officer. (PHOTO BY ANDRONIKA ZIMMERMAN/THE OBSERVER)

An adjunct professor attributed being frequently mistaken as a student to being a person of color at one of the Diversity Task Force’s Community Meetings during the week of March 7, but few students were present to hear her story.

The four meetings, two of which took place on the Lincoln Center campus on March 7 and 10, were held to provide information on the Diversity Task Force.

Peter Vaughan, Ph.D., dean emeritus of the Graduate School of Social Service and chair of the Diversity Task Force, presided over these meetings. He and the other Task Force members present participated in discussions with the attendees and encouraged their feedback, so that their concerns could be included in the Task Force’s report to Rev. Joseph McShane, S.J., president of Fordham University, and his cabinet.

McShane appointed the Task Force to study the climate of the University, review and report on the programs already in place and develop recommendations for him and his cabinet on how to address issues of diversity and inclusion.

At the meeting on March 10, attendees advocated for the incorporation of lessons and courses on diversity and inclusion into the University’s curricula.

An adjunct professor drew attention to the lack of diversity amongst faculty.

“I looked through the faculties of different departments, and I realized that there are no blacks, actually,” the adjunct said. “I mean, in many of them. In some of them, there’s not even the token one that many of them have. And the problem is that you have one and that’s it.”

“The point is that we’re talking about teaching students, but what [does] this curricula [do] when the faculty does not reflect equity?”

“From the day that I actually started to go here with my ID card, [people] assumed that I was a student,” the adjunct continued, alleging the mistake was due to her being a person of color. “That really just [shows] the depth of the issue here.” Another faculty member of color present also said that she has been mistaken for a student.

At the first meeting on March 7, the Task Force discussed eliminating hidden biases in curricula, presenting an unbiased history of Robert Moses and taking socio-economics, gender, sexuality and people with disabilities into account.

One recurring issue during the meeting was the perceived lack of trust between the student body and the administration.

Chris Hennessy, a recent graduate of Fordham College at Lincoln Center (FCLC), said that this distrust has caused students to feel that “this task force and the work that’s being done around this on the administration’s part is really a sort of weak, band-aid answer to what’s going on, that maybe there’s not going to be that action that students are always fighting for.”

“And like you said, that’s not the job of this group,” Hennessy continued, referring to a statement Vaughan had made about the Task Force being charged with compiling data and making suggestions, rather than implementing measures to address issues of diversity and inclusion themselves.

“And so I just invite you to think about how you, if you want this to be meaningful—and I know you all do—how are you going to bridge that gap,” he continued.

Hennessy claimed that this distrust was the reason for the meeting’s low attendance of approximately 15 students and less than 10 faculty.

“I’m in the camp where I want to see us working together, but there’s way too much distrust between the students and the administration,” he continued. “We need to get over that first. We need to know are we really on the same side, or are some of us just talking the talk in order to get people to stop talking about it?”

In response, Vaughan said that the lack of trust between students and administration was a “good piece of data,” and that a group of faculty came to the Task Force with the same concern. Vaughan said that as a result, the distrust between the students and the administration will be included in the data in the report presented to McShane and his cabinet. He also added that the compiled data will be distributed to all individuals and constituencies involved, and that McShane has “invited the [Task Force] to be public with what [they] do.”

The meeting on March 10 continued the discussion of these issues with a focus on faculty diversity. Other individuals discussed microaggressions in the classroom and holding professors accountable for teaching lessons on racism.

Between 50 and 60 people attended this meeting, but most were faculty. Approximately five students attended.

“I was really surprised by the fact that there were very few students there,” Shannon Constantine, FCLC ’19, said. “Considering the fact that I got multiple emails about it and they were advertising it quite a bit, I assumed that more students would be there.”

Napoleon Canente, Jr., FCLC ’17 and member of the Task Force, said that although there were not many students in attendance, it was “nice to see a lot of administrators and faculty members who care about it.”

During the meeting, Constantine suggested that a code of conduct should be implemented in response to the on-campus and off-campus bias incidents that have occurred this academic year. According to her, this code would ensure that students do not have “any excuses in saying they don’t know what is proper conduct in the University when interacting with people of different backgrounds and races.” She added that faculty would also adhere to this code of conduct.

“I thought that students should be made more aware of the expectations [at] the University so that people find out that the University wants to combat prejudice from the moment they get to Fordham instead of once an incident happens,” Constantine said after the meeting. “I thought of it as a preventative measure.”

Vaughan said that “of course there wasn’t the attendance that we had hoped for, but I think the attendees were engaged and they asked good questions.”

“I think the comments for the most part were very appropriate and really inform our questioning as we meet with other groups,” he continued.

According to Vaughan, the Community Meetings were advertised through emails to the Fordham community, signs posted around campus and through Task Force members individually reaching out to student leaders and professors with information on the meetings. They also provided pizza at the March 10 meeting.

The Task Force makes an appeal to “students and other members of the community to send us any comments or anything that they think will help us do a better job, anything that gives us information about the three points that Father McShane made when he appointed the Task Force,” Vaughan said, adding that their identities will be kept confidential. He also encouraged student groups to submit reports that they have compiled on issues of diversity and inclusion.

“Our plan is to synthesize all the data and work very hard to accurately portray what people have told us and come up with recommendations that we think fit what we’ve heard and also step-by-step action plans,” Vaughan continued. “This isn’t to go to the president and the provost and ask, ‘Are we good? Are we bad?’”

Dean of Students Keith Eldredge, a member of the Task Force, summarized the need for the Task Force in the University’s pursuit of being a more diverse and inclusive institution.

The Task Force will also be meeting with students in the graduate schools and the Professional and Continuing Studies department. According to Vaughan, the Task Force has divided itself into nine groups in order to meet with as many groups as possible. They will be meeting with “deans, the vice presidents and their staffs, with other units who provide support to students and faculty across the University, including the CUSP [Continuous University Strategic Planning] group.”