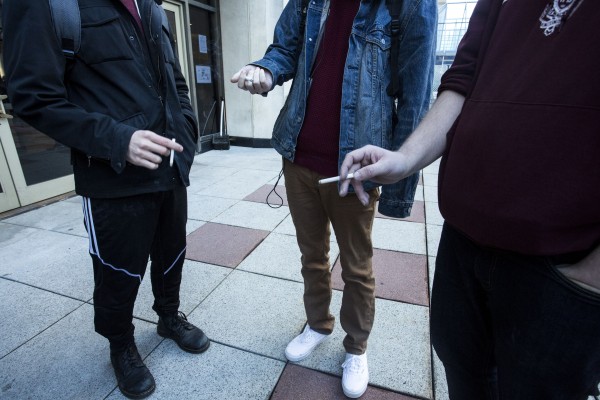 Smokers at Fordham Lincoln Center will have to stand at least 50 feet from all entrances when smoking. (JESSE CARLUCCI/THE OBSERVER)

Over spring break, the Department of Facilities Operations banned smoking within 50 feet of all building entrances on the Fordham Lincoln Center campus. This policy applies to all street-level and plaza-level entrances to Lowenstein, McMahon, McKeon and Martino Halls. There are red signs posted in the windows of all these locations to inform students, faculty and staff of this new rule.

“This has everyone stepping away from the entrances and at least making the entrances smoke-free,” while still “leav[ing] an outdoor area for smokers,” Timoney said.

“Our motivation was more in keeping the entrances smoke-free, so that you could simply pass through the building without passing through smokers.”

She said that there are no formal repercussions for violating this new policy, but does not foresee frequent violations. “If you are in the Fordham community, you’re pretty much supportive of your colleagues and fellow students,” she noted.

She explained that the urns have also been relocated to encourage this behavior. “There’s one now closer to the street at the Lowenstein front entrance, and out on the plaza they’re more towards the center,” she said.

“I think smokers know to throw out the cigarette butt in the smoking urn, rather than the garbage cans,” she added, believing smokers will gravitate toward these newly-relocated urns.

Timoney also mentioned that students can report high areas of smoke activity to nearby guards. She confirmed that all members of the Public Safety department are aware of this new change.

While other schools across the city including New York University, Barnard College and the CUNY system have banned smoking completely on their campuses according to the Americans for Non-Smoker Rights (ANR) website, Timoney said that there are no plans to completely ban smoking on campus at this point.

There is currently an independent and student-initiated petition to ban smoking on the Robert Moses Plaza. Shannon Constantine, FCLC ‘19, who started the change.org petition, said that she was surprised that smoking was allowed everywhere on campus. She “expected that it would have at least one major smoke-free space.”

On the recent policy change, Constantine stated that the University could go even further with this initiative, depending on the students’ responses to the idea of designating the plaza as an entirely smoke-free area.

“It’s not something I think I should force on the student body, if they don’t want it,” she said.

If it does garner enough student support, Constantine said she would like to take this petition to the administration, which currently has 50 signatures, half of its total goal of 100 signatures.

“The Plaza is a public space where other people who aren’t a part of the Fordham community come to visit,” Constantine added.

According to the official site of NYC Parks and Recreation, smoking is prohibited in “all New York City parks and pedestrian plazas.” While “New Yorkers themselves” should enforce this rule violators can be reported to Park Department employees or Park Enforcement Officers.

This rule does not apply to the Robert Moses Plaza, as it is not a public park or area. Timoney clarified that the plaza is officially “a private area, open to the public.”

Timoney indicated that there would not be further announcements of the policy change other than the signs already posted. “We haven’t really seen any kind of backlash,” Timoney said.

She cited the warm weather as a possible reason and hopes that everyone will be used to the policy when it gets colder.