Getting Cheap Tickets: What Every Student in NYC Should Know 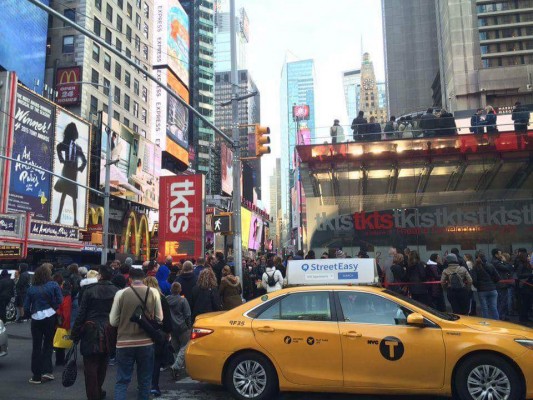 There is only one thing standing between students and the theatre—money. Fortunately, there are lots of options for discount tickets out there just waiting to be utilized. To save you time and money, The Observer has compiled some of the easiest ways to score Broadway and Off-Broadway tickets without breaking the bank.

What many students do not realize is that almost every show on Broadway has either a student rush or regular rush policy in place. These lotteries, in which tickets are given out on a first come, first serve basis, are won by arriving at the box office as soon as it opens. On weekdays, when the box offices open at 10 a.m., lines begin forming outside of the front doors as early at 7 a.m. for the most popular shows. On Sundays, box offices do not open until 12 p.m., so students can catch a break and wait to arrive in Times Square until around 10 a.m. This option can save theater goers loads of money, as most rush tickets range from $25 to $35.

For those who can’t make it out to the box office in the morning because of class, many shows also hold an in-person ticket lottery for that day’s performance. “The Book of Mormon,” “Aladdin” and “Wicked” all hold in-person lotteries beginning two and a half hours prior to the show. Theater patrons can register for up to two tickets a piece and must stay for the lottery drawing. If chosen as a winner, individuals must pay in cash and present a valid photo ID that matches the name on the registration card.

If the thought of fighting the massive crowds in Times Square sounds miserable, then you will be glad to hear that there are also online lotteries and apps that offer huge discounts. TodayTix is a free app for smartphones that allows its users to browse through an extensive list of current productions and buy tickets for up to 75 percent off. Prices range from as little as $20 for a front row ticket to “Straight,” an off Broadway play running at the Acorn Theatre, to $149 for orchestra seats to “Wicked.” However, if the show you’re dying to see is still out of your price range on the app, there is still hope! TodayTix regularly updates their prices and changes them to cater to the current theater market, regularly lowering prices of certain shows and increasing prices of others.

Besides outright buying tickets, TodayTix also holds daily lotteries for shows, which currently include “Fun Home,” “She Loves Me,” “Dry Powder” and “Buried Child.” Individuals can enter these lotteries from the comfort of their own beds. Each person is allowed to enter for up to two tickets and will be notified by email if they won. Payment is not required until participants are notified of their win. At that time, payment is accepted via a credit or debit card on the app and tickets can be picked up at the box office beginning 30 minutes prior to showtime. TodayTix lottery tickets prices range from the special anniversary price of $19.95 for Roundabout Theatre Company shows to $35 for more popular shows. This season, the Public Theatre also partnered with TodayTix to hold a special lottery for free tickets to preview performances of upcoming shows.

Some shows even hold their own same-day digital lotteries, most famously the ever popular and highly competitive “Hamilton” lottery. These lotteries, which include “Jersey Boys,” “An American in Paris” and “The Curious Incident of the Dog in the Night-Time,” among others, are simple to enter and only require an individual to enter their name, email, zip code and number of tickets desired. The lotteries will notify the contestants if they won or lost via email a few hours before the performance. Winners are often required to pay in cash, and  simply must present a valid photo-ID to the box office to pick up the tickets.

The Playbill Rush Report and Broadwayforbrokepeople.com have comprehensive lists of all standing room, digital lottery and rush policies and are valuable tools for anyone who is looking to save some dough when going to the Great White Way.