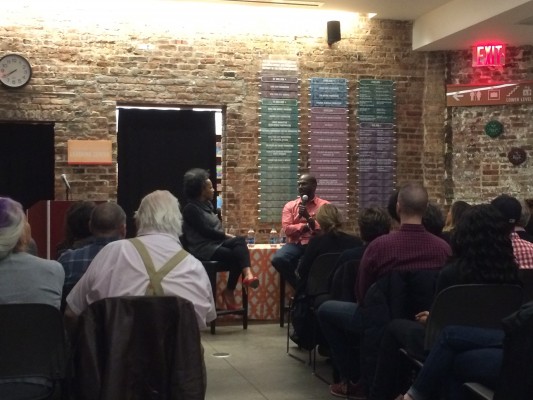 On March 11, Associate Professor of political science at Fordham College Lincoln Center, Christina Greer, joined comedian Mike Yard, a frequent guest on “The Nightly Show with Larry Wilmore,” for a Tenement Talk at the Tenement Museum in the Lower East Side. The focus of the talk was on immigration, specifically Yard’s Caribbean immigration story.

Yard came to the U.S. as a thirteen year-old from St. Croix in the Virgin Islands. His mother was born on the island of Dominica and his father in St. Lucia. Yard described life in St. Croix as a place “where everybody knows everybody, and looks out for everybody, so the kids can run a little bit more freely,” he said. Something that he said contrasted how things were once he moved to Brooklyn.

“It was fun,” Yard said of his time growing up in St. Croix. “I don’t have any sad memories except the day that I left.”

Yard’s father lost his job and decided a move to New York was best for the family. Yard’s two older brothers, sister and younger brother stayed in St. Croix while Yard was sent to stay with family friends to figure out the city for when his family joined him in Brooklyn.

Because Yard didn’t have a permanent address in the States, he was unable to attend school, which baffled him. “I had to walk past at least 30 kids that were enrolled in the school but refused to go,” he said. “And here I am, wanting to go to school.”

When Yard’s family eventually found an apartment in Brooklyn, he described it as “the worst neighborhood in America,” but that it was the happiest day of his life.

[quote_center]“I had to walk past at least 30 kids that were enrolled in the school but refused to go,” he said. “And here I am, wanting to go to school.”[/quote_center]

“Thankfully I was not born into [east New York],” he later explained in the Q&A portion of the talk. “If I was born in east New York, I would be a totally different person, but the fact that I came from somewhere else where I had seen a different way that black people lived […] that helped me to not really fall prey to those pitfalls, especially as a young black man,” Yard continued.

On his identity and fitting into his new surroundings, Yard said “It’s unique in that we are a U.S. territory, but when you come to the mainland most Americans don’t classify you as American: you’re Caribbean. And then most Caribbean people say, ‘no, you’re American.’ You don’t know where you fit.”

“I don’t know that I’ve made it,” Yard responded quickly which was met with laughter from the audience.

When Greer opened the conversation to the audience for Q&A, a Nigerian-American who grew up in Detroit, asked about black identity in America when there are so many different immigration stories so that one identity doesn’t necessarily fit all black Americans.

“Identity is multifaceted and it shifts,” Greer responded. “Recognizing where you are, not just in your life but in your physical, geographic space, your identity can shift,” she continued. Greer explained that because of the many different black experiences and immigration stories, no one black American has to choose one single identity. “It’s not up to anyone else to tell you what identity looks like, it’s really up to you to embrace it,” Greer said.

The talk was in correlation to the Tenement Museum’s “Your Story Our Stories,” which explores different immigration stories and collects objects of those stories.