In Retrospect, If Only Someone Had Told Me:

By now, I have about as many stories about the magazine industry and internships in general as Mean Girl Gretchen Wieners has secrets in her hair. (And Gretchen Wieners has big hair.) I mean, after five different internships, who would expect anything less? It’s been a long, hard road since I started, which is why I have conjured up a list of what I’ve learned… things no one will ever teach you in class.

I was a mixture of bored and anxious when I decided to find my first internship as a second semester sophomore. I went to Career Services and (surprise, surprise) received no help, only to be told that I could not start the process until my second semester of junior year. Yeah, right.

Obviously, I did not listen, and not listening put me at my first internship with a New York-based designer. I actually found the position on Craigslist (believe it or not), which brings me to point number one: there are other avenues to getting what you want. Just because one way of reaching your goal becomes obsolete doesn’t mean that there aren’t other ways of getting there. Get on the computer and research! You will be surprised at how many big-time employers use Web sites like Craigslist to find interns.

This may not have been a magazine internship, but it was a perfect place to start. With only six employees (I, as an intern, was the seventh), I was taught a little bit of everything: from following up with clients to compiling press releases; from packing for trunk shows to seeing how a season collection is ultimately created. This brings me to point number two: if you can, start small. Being able to work for a small, tightly knit company is beneficial in so many ways. Not only do you become a jack-of-all-trades, but you are also greatly relied upon, which in the end will allow you to walk away as a master of multitasking, a skill that will make you every employer’s favorite intern.

After working for the designer, I landed an interview with a now deceased shelter magazine’s creative services and marketing department, only to start there that August. From then on, it was dinners with Mario Batali, having chats with Georgio DeLuca, viewing Isaac Mizrahi’s beautiful couture gowns in his studio… you know, nothing out of the ordinary. But before you start throwing things at me in jealousy, know that there was plenty of work involved. Trust me. The most valuable thing I learned there is point number three: Every. Detail. Counts. This is something that goes across the board for interning. If you are already anal retentive, great. If not, start now. Becoming obsessed with detail makes you more alert as to what is going on around you and is just one more thing that makes you irresistible to employers.

The magazine folded that November of 2007, and our close-knit family was forced to separate and disperse, which leads me to another key point. Number four: network, network, network! Many industries like publishing run in very, very small circles, meaning you will keep seeing the same people. So, if you are smart, you will use this to your advantage and network your ass off. And I’m not saying wait until the establishment shuts down either! You should be networking and building relationships the minute you walk through that door for your interview until long after your last day at the office.

Networking can be as simple as asking someone about his or her job. You’d be surprised how much people love talking about something they are passionate about and, they’ll remember that you were curious enough to ask. For example, I asked the PR director of the shelter magazine how she got her job, and she later asked me if I would be interested in interning for her once she moved to a food magazine. All this because I took the time to ask.

For all the glamour, the couture, the fashion shows and the thousands of dollars worth of freebies at my next internship, there was also ego and pressure that ran so thick you couldn’t cut it with a knife. I can vividly remember moments when I thought I must be certifiably insane to be doing what I was doing with a full course load, a second major declared, embarking on a new relationship and trying to stay as normal as humanly possible. Either that or I could very well be a masochist.

Welcome to the world of fashion magazines, where I learned some of the most valuable working and general life lessons to date. The biggest is number five: learn to separate your job from your life.

There is a very fine line between being amazing at your job and actually being your job, and it can be a real challenge to side with the former, especially with gadgets like the Crackberry. You have to make it a habit to leave your work at the office and try to not let the “be your job” mentality of others cling to you like dog hair to your beautiful, new, Burberry trench coat. I made the mistake of letting my job swallow me whole, and in the end, I not only was miserable but also had to withdraw from a class. Oh, and my relationship ended.

So now that you have the words of such a wise, old woman of the wood, you are better armed as you head into the battlefield of interning. And once you are finished, I can only hope your hair is as big as mine and Gretchen Wieners’. 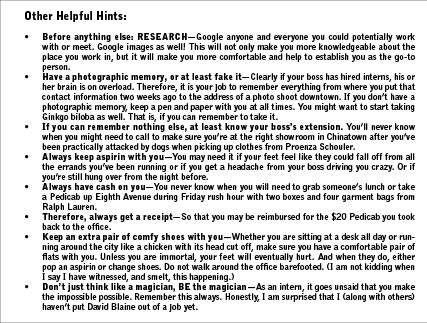