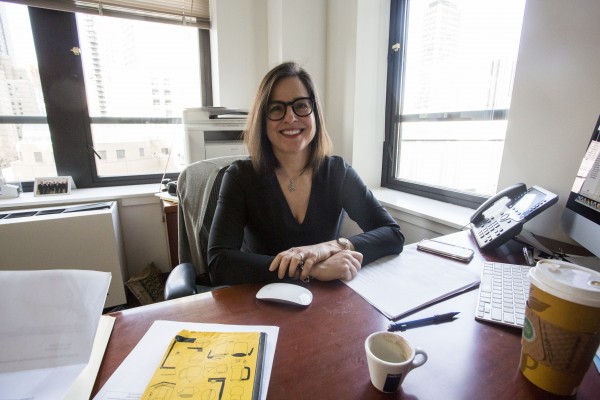 Jacqueline Reich, chair and graduate director for the department of Communications and Media Studies. (PHOTO BY JESSE CARLUCCI/ THE OBSERVER)

Pending state approval, Fordham’s Communication and Media Studies department (CMS) is preparing to launch four new majors in the fall of 2016. The new prospective majors—communication and culture, film and television, digital technology, and emerging media and journalism—will replace the sole communication and media studies major currently in place at both Fordham College at Lincoln Center (FCLC) and Fordham College at Rose Hill (FCRH). These proposed majors will also be offered as minors, accompanied by a sports journalism minor.

Jacqueline Reich, chair and graduate director for the department of Communication and Media Studies, said that she hopes that approval, if granted, will be obtained before next fall. She expects that the implementation process for the prospective new majors will be gradual.

“Next year is a transition year,” she said. “We are making accommodations for all of the students to best advise them. In fact, we’re having mandatory advising sessions with the faculty to acquaint them to the [proposed] new curriculum.”

There are concerns regarding the deficiency of specialized FCLC professors for the journalism major. Of the department’s faculty members at FCLC, two out of 11 are listed as having taught at least one journalism course, according to the Fordham website.

Upperclassmen interested will be grandfathered in to any of the four new majors. CMS has created a list of former classes that are comparable to the new classes in order for students to substitute their credits. Reich explained that all of the courses have been given new numbers and new designators (COMC for communication and culture, FITV for film and television). The department is working with administration to provide students with a comprehensive equivalency guideline if the proposal goes through.

“We take advising very seriously, so we’re working diligently to make it as easy as possible for students during this time,” Reich said.

To prepare for the potential expansion, the CMS department surveyed 79 communication programs at several institutions of varying ranks-all 28 Jesuit institutions, peer institutions such as Boston University, regional schools such as New York University and aspirational universities such as Stanford-evaluating their structures and requirements to determine the best options for Fordham, according to Reich.

“We looked at their structures…at whether they were schools of communication [or] departments with separate majors and what requirements each of them had,” Reich said. The department then analyzed its findings and adapted them to fit the needs and wishes of Fordham students.

“We’ve developed this new program… with the students’ best interests at heart and… with student input,” Reich continued. “We sent out a survey to students a year and a half ago when we first started this, to [find out] what they wanted to see.”

“I think our main [hope for] the program [is] that students have a balance of theory and practice and that students receive a very strong ethical foundation in the communications curriculum [that is not] just limited to one requirement but that [will] be infused throughout.”

Gwenyth Jackaway, the associate chair of the department, spoke highly of the strong ethical throughline the department plans to implement across all of the proposed majors. “We have the potential to be one of the stronger programs on the east coast,” Jackaway said. “But in order to really stand out, you have to figure out what you’re going to really excel at. Since the Jesuits have such a long standing tradition of focusing on justice and ethics, it’s a logical connection.”

“Our goal is to produce professional communicators who understand the power and responsibility of working in the media because the media really weave the web of meaning in which we live,” she said. “That’s what the main theme will be, and that’s what will link all of the proposed majors, and that’s part of why they’ll start with the common intro course, to lay the foundations and then everyone will go off into their majors.”

With only two labs for communications students at FCLC and no concrete plan to expand, there are concerns that students will not have adequate tools to practice their skills. Reich assured that there are discussions taking place on how to best provide these resources.

Due to limited space on campus, the department is currently looking into creating partnerships with companies in the area that are willing to offer their facilities to students, according to Reich.

Jackaway noted, “There are ways in which we can expand our offerings in more practical, applied aspects of communication that don’t necessarily have to cost a lot of money.” For example, the practical emphasis for prospective film and television major will be placed on screenwriting.

“Hopefully, in the future, we’ll have even more facilities,” she added.

Part of the requirements for the prospective majors will be fulfilled through extra-departmental courses. Students will be able to take up to two classes outside of CMS. Jackaway said that several outside departments have begun to contribute courses, such as ‘Mass Media and American Politics’ from Political Science and ‘Integrated Marketing Communication’ from Marketing.

“Because mediated communication has become such a central part of the human experience, lots of disciplines have started to get interested,” Jackaway said. “Doing something like this helps connect the more traditional disciplines of the liberal arts to contemporary issues.”

Regardless of the proposal’s outcome, the department does not plan to create new chairs for each major and will maintain the structure of one chair and two associate chairs, one at each campus.

Joseph Desciak, assistant dean for freshmen at FCLC, said, “One of the administrative realities to the changes of the communications department is that we have to recode all the courses, change DegreeWorks, change our bulletin [and] reorient people as to what the courses are.”

While the new course designators will be implemented, the COMM designator will continue to be used for courses that apply to all of the degrees, such as introductory courses and internship seminars.

Additionally, according to Jackaway, the School of Professional and Continuing Studies will continue to offer the original communication and media studies degree.