“The Revolution Will Be Televised” at Fordham 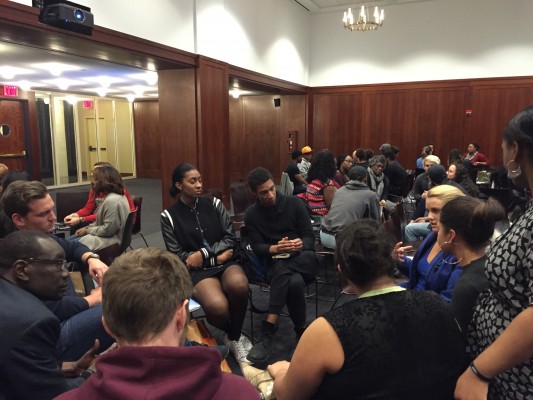 “Fists in the air. Fists in the air. / You give the most rarest of life America’s bare life / One drop of my blood makes you illegitimate / However countless generations of you / and I can be barely called a citizen.”

On Feb. 29, students, faculty and community members gathered in the 12th floor of Lowenstein for The Revolution Will Be Televised, an event created to discuss the evolution of contemporary resistance and protest.

Fordham theater major Wayne Mackins (FCLC ’19) began the event with a poem he had written only a week before, inspired by the controversy online between #BlackLivesMatter and #AllLivesMatter. “I do believe that all lives matter, but right now we need to broadcast and identify the fact that black lives matter,” he said. “We need to understand where we’re going and how we should get there.”

Participating in the panel were Nakisha M. Lewis, Allen Kwabena Frimpong and Fordham alumna Jodi Hines. Lewis is a senior strategist at the Ms. Foundation, a “nonprofit foundation building women’s collective power for social, economic and reproductive justice.” Frimpong is an organizer at BlackLivesMatter NYC who has worked in activism and community service for over a decade. Hines is a Brooklyn second-grade teacher who is the former president of Lincoln Center’s Black Student Alliance (BSA). The moderator was Associate Chair of African and African American Studies Aimee Meredith Cox.

Cox began by explaining, “I really want us to be able to move from a place that’s theoretical and esoteric to thinking about concrete strategies, what it means to talk about what’s happening in our local context.”

She reminded everyone of the event held last year for the 50th anniversary of Malcolm X’s assassination, and referred to the popular question of whether the mass mobilization of black communities is simply a blip in history. She responded saying, “As my late grandfather would say, ‘If we weren’t protesting, we wouldn’t be alive.’”

Hines spoke about her work experience. “All of my second-grade boys are black and Latino,” she said. “How do I explain to a seven-year-old child that it’s not gonna be easy? They’ll come in asking ‘why am I getting treated differently from that person because I look different?’ For me, [protest and revolution] is educating young black boys.”

Lewis explained that though the terms are used in similar situations, there are key differences between protest, resistance and revolution. “Protest is a tactic,” she said. “Resistance is a way of being; a way in which we can show up as a people. When speaking to women of color, I often speak about love as being an act of resistance. Loving each other and loving ourselves… saying we get to hold space and take up space.” She continued, “If protest and resistance get us to change, then revolution is the transformation over time of a social condition.”

Hines gave the audience background information on where this movement, born as a social media hashtag, originated. After Michael Brown was killed, she said, “Our people became real-time journalists on the ground, reporting on social media.” She recounted the Black Life Matters movement, during which hundreds of supporters traveled to Ferguson to help those in the community rocked by violence and division.

Hines then spoke about her days as President of the BSA. She told the audience her job was very draining. “Sometimes you never felt like you were doing enough, because they want you to solve every problem,” Hines said. She lamented how she had to “finagle” her events to get funding, while she was trying to create change and a safe space for black students who only made up four percent of the student population.

“Imagine someone’s life, waking up every day and walking into an institution where you’re constantly thinking about how to play chess, when many of your counterparts don’t have to figure out how to strategize their day. When I think about the constant stress that that takes, that’s not a joke, ” Frimpong said.

He added, “You’re always trying to bring the future into the now, as a black person in America.”

Lewis told the story of the first Movement for Black Lives this past summer in Cleveland. “Wherever two or three black people are gathered, magic is happening,” she said. “Around that time Sandra Bland was killed. There was loss happening, yet we were able to hold both… We get that we are in a marathon run… and there’s got to be people handing out water along the way.”

The second hour of the night was devoted to audience discussions in groups. Cox asked some questions: “What are the most important spaces that you occupy, where you would like to see change happen? How would you like to see ways that people can live more full lives, live in the community and be protected by themselves and each other?”

After about twenty minutes of discussion, the groups shared ideas on how to make changes in their spaces, from founding new organizations dedicated to social change to educating those around them.

Hines closed out the night, saying, “We plan, but did you do? I think that’s how we should be looking at everything.”

Cox encouraged the audience to attend the Fordham Diversity Task Force meetings run by Peter Vaughan, dean emeritus of Fordham University Graduate School of Social Service and chair of the President’s Task Force on Diversity and Campus Climate, taking place at FCLC on March 7 at 5 p.m. in Pope Auditorium and March 10 at 12:30 p.m. in the 12th floor lounge.

“I definitely think that this event was able to accomplish its goal,” Frimpong said. “Everyone can begin to build relationships differently and hopefully leave with a new understanding.”

“This was the perfect number of people because it’s the precursor to the town hall. That will really allow people to speak about their truth … and concrete strategies for change,” Cox added.