“Night Late,” the New Late Night at the UCB 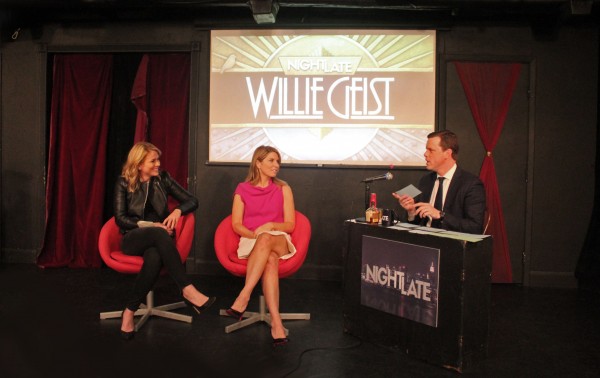 What could be better than a late night talk show on television? A parody late night talk show put on by the Upright Citizen’s Brigade (UCB)- for only $5: The old stomping grounds of comedians like Amy Poehler, Tina Fey and Nick Kroll. On the last Wednesday of every month, a team of UCB comedy writers put together a 45 minute spoof of popular late night talk shows titled “Night Late.” However, no two “Night Late” shows are the same, and depending on everything from the hosts, bits and even the audience, you never really know what the night will bring.

Mike Cronin, one of the producers, shared, “much like SNL, we get a new host each month, so we get a completely different show each time …  sometimes similar comedic ideas come through and we think ‘Oh, we did a bit like this a couple of months ago and it worked really well.’ However, each show really is very different.”

Created by Eric Cunningham (the mind behind “White Guy Talk Show” on Fuse) in 2014, “Night Late” is orchestrated by a team of 11 budding comedians/comedy writers and put on at the UCB Theatre in Chelsea. Before the show, audience members are treated to an open bar and the occasional live band in a cozy black box that allows seating on three sides of the stage so everyone can be a part of the show.

Their first soldout show in February was hosted by Willie Geist of “The Today Show,” along with his designated sidekick Megan Colarossi, and guest starred Sarah Palin’s former handler Nicolle Wallace. Throughout the show, Geist (who jokingly referred to himself as Willie “Geissup”) indulged the audience in NBC network gossip and the hilarious circumstances of working with his under-appreciated assistant “Toby”. Nicolle Wallace shared her funniest Palin story that involved Sarah Palin genuinely not knowing the names of all the continents; there was a birthday cake for Geist’s belated birthday that fell on the ground (multiple times), a game of Pong Beer (the opposite of Beer Pong), a mini game show segment and, of course, lots of laughs.

Reflecting on last month’s show, Cronin shared, “Willie’s show was a very traditional, very strong bit late night show,” but that’s only because it was tailored to Geist’s personal hosting preferences. Cronin couldn’t stress enough that each show’s structure is unique. For example, “Abra [Taback, who will be hosting “Night Late” at the end of the month] loves ‘Ru Paul’s Drag Race,’ and she said, ‘You know what I really want to do? I want to make like a ‘Talking Dead’-style show, except devoted to ‘Ru Paul’s Drag Race.’ And we said, ‘Ok cool, this month we’re doing a Ru Paul’s Drag Race tribute show.” “Night Late” is often referred to as a late night machine because of this element of spontaneity that the writers generate every month. However, Cronin shared that one thing is for sure, “If [people] come to “Night Late,” no matter who the host is, it’s going to be a great show.”