A Look Inside the RFP Process & Sodexo Controversies 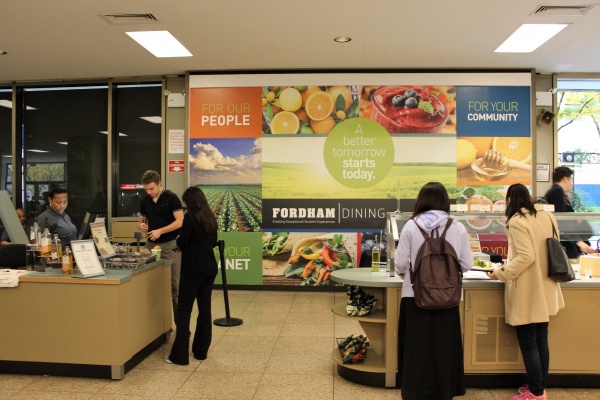 After cutting into his chicken on Feb. 24, a Fordham student decided to take a picture of his dinner and post it on Facebook. Collecting approximately 170 reactions, the photo was captioned “When Sodexo serves that good raw chicken.”

Discontented students complaining about Fordham University’s food, however, is nothing new. With myriad social media posts and a petition to make Fordham “Sodexo-free” that started on Dec. 3 and has since collected over 680 signatures, these students have actively demonstrated their desire for better food on campus.

On Dec. 4, the University issued a Request for Proposals (RFP) to consider dining service providers other than Sodexo. The RFP has itself sparked petitions by both faculty and students in support of the University’s unionized Sodexo workers due to concerns that replacing Sodexo would put the workers’ contract provisions in jeopardy.

Why was the RFP issued?

In 2013, Fordham University and Sodexo arranged a 10-year-contract at the conclusion of an RFP process. The current RFP, however, terminates this contract after only three years.

“[Sodexo] came to us requesting some changes in the agreement and we figured as long as we were going that far that we might as well go out to the industry and see what other companies could show us,” Deming Yaun, Dining Services Contract Liaison, said. “We didn’t want to just go ahead and make the changes without seeing what other companies might have to say.”

“We realized also at the time that maybe we didn’t have the best plan beyond that three-year period,” Yaun continued. “And so why not look at some other organizations to come and give us their thoughts.”

When asked about the RFP, Dean of Students Keith Eldredge assured that “it is not an indication that we’re unsatisfied with individual people or the individual effort from the management.”

“I eat at the places and interact with them and I know Batman and Ian and different folks, and it’s not a reflection of ‘oh, these are bad people. They’re not doing good work,’” Eldredge said, “Again, from three years ago, satisfaction has increased on both campuses. We’ve had the huge privilege of such a dramatic change in the food service venues on the Lincoln Center campus since the opening of the Law School of McKeon Hall. We could have no place to go but up. And some of that’s facilities driven and some of that’s the individual effort of folks like John Azzopardi, the district manager, and Sue [Irrukala], who is our new general manager, Christopher in catering—a lot of different folks who have worked really hard.”

What are Aramark and Chartwells?

Similar to Sodexo, Aramark and Chartwells are multinational companies. They are also the only two dining service providers larger than Sodexo.

Aramark, headquartered in Philadelphia, employs 270,000 people across 21 countries. Among their accolades are earning a perfect score on the 2016 Corporate Equality Index (CEI) and being named one of America’s Best Employers by Forbes in 2015.

Chartwells is a company under the Compass Group, a British corporation. Compass has over 500,000 associates worldwide and was named the sixth largest publicly traded company in the world by USA Today. They were also named one of America’s 500 Best Employers by Forbes.

Chartwells has also faced criticism for serving raw food and overcharging students at some of the locations it serves, primarily Quinnipiac University.

Will replacing Sodexo improve the quality of the food?

In an email to the Fordham faculty about Sodexo’s unionized workers, Sandy Pope, a business manager of Teamsters Local 810, the union that represents these workers, said, “It is surprising to us that students don’t recognize that changing major multi-national corporations won’t necessarily result in better value or better food.”

“They’re working in New York City with the food, the budget and the workers that they have and if they don’t cut people’s benefits and wages, then they’re pretty much going to have the same budget,” Pope said. “It’s not going to be that much different.”

“I think that if it’s just better food students want, then I would be focusing on putting pressure on whoever is there to get better food,” Pope continued.

Throughout the year, the University receives monthly operating statements from the dining service provider, which are monitored closely, according to Yaun.

“If we start seeing that the dollars being spent on food shrinks a little too much, then we can have conversations,” Yaun said. “But at the moment, we’re at pretty good levels.”

Eldredge recognizes these concerns and cautions students on their expectations.

“I want to caution people in saying if we switch to a different provider, it’s not like it’s an on and off switch, that all of the sudden everything that is horrible is going to be magically better somehow,” Eldredge said. “There’s still some constraints within the University’s system—and some of it’s financial, some of it’s physical—and so I’m hopeful that whether we continue with Sodexo or we bring in somebody new, food improves.”

Yaun said that he has already communicated to the bidders the importance of food quality and food safety.

Citing “incredibly great ingredients” such as Grade A USDA choice beef and cage-free eggs currently used by Sodexo, Yaun said that “we have asked every company to keep the same quality.”

“We have years of ‘A’ scores in a row from the New York City Department of Health and that’s no easy task,” Yaun continued. “We’ve had conversations with all of them about how important this is.”

The last time a Fordham dining location received a score below an A was in March of 2011, when the Student Deli received a C, the lowest possible grade, for violations such as live roaches and unsanitary preparation surfaces.

Yaun added that improving the quality of the food is mostly driven by “how [the companies] infuse their passion for culinary excellence into the staff.”

According to Yaun, however, Sodexo had made improvements over the past three years.

“For the first three years with Sodexo, we’ve seen significant, positive, remarkable change, the extent of which is not often seen at universities in such a short period of time,” Yaun said, pointing to rising student satisfaction rates over the past three years, which were conducted by an independent firm and administered by Sodexo.

Who is making the decision?

One of the main decision-making bodies in the process is the RFP Student Selection Committee. Comprised of students from both the Rose Hill and Lincoln Center campuses, this committee is advised by Senior Vice President of Student Affairs Jeffrey Gray, Eldredge and Yaun.

The students that sit on this council were selected by previous members of the council, according to Magoon.

Among the groups represented in the council are the Campus Activities Board (CAB), the Residence Hall Association (RHA), the Commuting Students Association (CSA), the Gabelli School of Business and the Dorothy Day Center for Social Justice (DDCSJ).

The council “is comprised of a vast array of students,” Magoon continued. “So I think that’s why Vice President Gray looked to [the council], because [it] already had a good handful of students that were already pretty involved and are familiar with Sodexo and would be committed to the process of reading through the proposals that have been submitted, going and visiting vendors and hearing their presentations.”

He also added that the student body will eventually be brought more into the process and that the final decision will be made by the administration.

According to Yaun, there is also a “set of staff and administrators” taking part in the process and input from faculty will be sought as well.

What the RFP Student Selection Committee Does

In their capacity, the members of the RFP Student Selection Committee review documentation, such as the RFP itself and the formal bid documents. As part of the selection process, they will also attend presentations given by the bidding dining service providers and will take part in site visits to locations where the bidders, including Sodexo, already have operations.

Eldredge stressed, however, that students on the RFP Student Selection Committee should think realistically when visiting other locations.

“You know, you see this wonderful, awesome thing in some other school,” Eldredge said. “Then you say ‘Oh, but Aramark does that. If we bring in Aramark, we’re going to be like the other school.’ Well, maybe we are, but maybe they have a campus center that has 50,000 square feet for a food venue. We’ve got the Ram Cafe. So I’m just trying to make sure students are having realistic expectations about whatever changes might come.”

Could Fordham provide its own dining services?

“One of the advantages of having a company do this is the depth of resources that these organizations have,” Yaun said. “Sodexo is among the largest employers in the world. And they have brought us resources worldwide. And the other companies that are involved now—Chartwells and Aramark—can do the same.”

Regarding Fordham providing their own dining services, Yaun said it is something the University is “excited to learn more about,” it is not a direction in which the University will be going during this RFP process.

Recently, Teamsters Local 810 began campaigning for the continuation of the contract provisions of the University’s Sodexo employees if another dining service provider is selected.

“From what I’ve heard, both of the two other vendors are very much open to re-interviewing,” Magoon said. “I’m hoping that continues to be true.”

“I know that Fordham and Vice President Gray, in talks with the vendors, have really stressed the importance of [the contract provisions], and [emphasized] that we have a really good staff,” Magoon continued. “And so they really emphasize retention.”

“I will say that in the process of meeting with vendors, I can guarantee that the students on the committee will emphasize to the vendors that we want to see workers retained,” Magoon said.

As the RFP process continues, Magoon said, “My million dollar question that I know people are wondering is if Sodexo is going to be replaced or not?”

“I honestly don’t know,” Magoon continued. “Everything seems really up in the air. We’ll just have to wait and see, because it looks like they are three very good companies that appear to have very good proposals, [and] that any three of them could do great for Fordham.”

Yaun said, “I think our relationship with Sodexo is valued and [they] are doing and have done a fine job.”