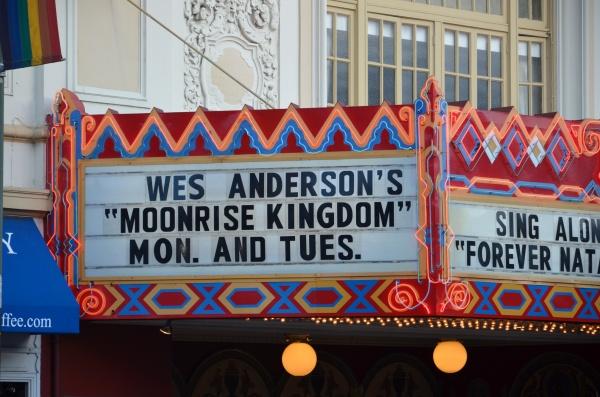 A special screening of Moonrise Kingdom is shown at a theater. (PHOTO COURTESY OF STEVE RHODES VIA FLICKR)

With Valentine’s Day fast approaching, here are some suggestions for two movies to watch on this most romantic day of the year.

Now in theaters is “Brooklyn,” the story of an Irish immigrant who moves to New York City in the early 1950s. Based on the novel of the same name by Colm Tóibín, “Brooklyn” is the best-reviewed movie of 2015 and is nominated for three Academy Awards, including Best Picture.

Starring Irish actress Saoirse Ronan as Eilis Lacey, the film tells the story of one girl trying to follow her heart when faced with two great opportunities. After coming to New York, Eilis meets Tony Fiorello, a young Italian man from Queens, and they quickly form a strong bond, him teaching her about American (as well as his Italian-American) culture. However, when problems arise back home in Ireland, Eilis needs to decide what matters most: her real family in her home country or the adopted family in this new land.

“Brooklyn” is gorgeous, complete with breathtaking cinematography and a script that sings with the spirit of New York in the 1950s. But while the technical aspects of the movie are beautiful on their own, it is Ronan’s performance in the film that shines brightest. Movies about the American Dream have been made for nearly as long as film has existed, but Ronan plays Eilis with a sense of authenticity and truth that’s often lost. As an actual Irish immigrant, the 21 year old Ronan doesn’t just read the script she is handed, but is able to relate to the material as well, providing us with an outstanding performance that demands to be seen. She carries the film, aided by Tony, her love interest, played by Emery Cohen

If you’re looking to go to the theater, this is the best bet for a solid romantic film out right now. While the romance is the core of the movie, it never becomes overly dramatic or cliched. Instead, it remains a sweet and touching love story about the city we all love. Even the hardest of hearts will be softened by “Brooklyn.”

If you’re looking for a night in with Netflix instead, “Moonrise Kingdom” might be one of your best options. A story of young love and many laughs, “Moonrise Kingdom” happens to have what might be the greatest set of child actors in a movie ever. Jared Gilman and Kara Hayward play Sam and Suzy, a pair of kids who live on a fictional island in New England. After a long distance romance becomes serious, the 12 year olds run away from their respective homes and attempt to make it on their own. This leads to Sam leaving behind his scout troop (led by Bruce Willis and Edward Norton) and Suzy abandoning her large family, who lives on the island (the parents played by Frances McDormand and Bill Murray), in favor of the woods of New Penzance.

However, the true genius of the movie isn’t solely in the number of outstanding actors in the cast, but in how much love the film shows its characters and the story they tell. Turning a romance into something much more sincere and heartfelt than is usually given to movies led by young actors, “Moonrise Kingdom” is simultaneously serious and hilarious, with one of the smartest scripts ever.

Written and directed by Wes Anderson (“The Grand Budapest Hotel”), the comedy is funny and the tragedy is sad, which is all that can be hoped for in any movie. But “Moonrise Kingdom” is not just any movie. There is something about rooting for a romance like this to succeed that makes the film incredibly exciting for such a small scale story, which is only aided by great performances from such strong actors and actresses of all ages. A movie as sincere, goofy and heartwarming as “Moonrise Kingdom” is an excellent bet for your Valentine’s Day.