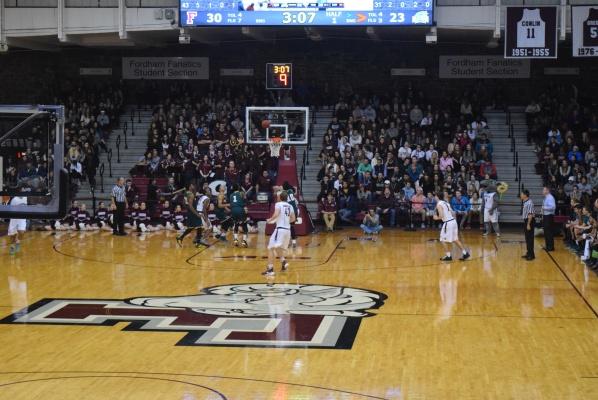 The Fordham Men’s Basketball team is looking to finish the season on a positive note. (ANDREA GARCIA/THE OBSERVER)

The month of January is behind us. That means that midterms are in just a few weeks. That also means that there is just one more month of regular season basketball for Fordham’s men’s varsity team. This past week, Coach Jeff Neubauer and his squad first traveled up north to face off against the University of Massachusetts-Amherst (UMass) and then hosted Saint Joseph’s University.

On Jan. 30, the Fordham Rams (overall 11–8, conference 2–6) faced off against the UMass Minutemen (overall 8–11, conference 1–6). The game was nationally televised on the NBC Sports Network, so many Fordham students were looking forward to watching their team win on the road. This matchup marked the 42nd meeting between these two teams, with the Minutemen leading the all-time series 29–12. The first 8 minutes of the game featured both teams exchanging buckets. The Rams then used a 13–3 run to take their largest lead of the game, 27–17, with 7:44 on the clock. UMass would then surge back with a 15–5 run of its own to tie the game at 32. The second half started off rather slowly, with seven ties and no team holding a lead larger than three points. With 19 seconds left in regulation, Fordham held a narrow 63–60 lead following an Antwoine Anderson free throw. UMass effectively converted in its last play, with a three-pointer from Donte Clark which tied the game. With nine seconds remaining, Nemanja Zarkovic missed a final three-pointer, sending the game to overtime. Head Coach Jeff Neubauer’s squad outscored the home team 15–9, grabbing the thriller, with a 78–72 win. On the offensive end, Fordham was led by Joseph Chartouny and David Pekarek who scored 18 and 11 points, respectively. Coach Neubauer also earned his 200th career victory.

On Feb. 6, the Fordham Rams (overall 12–8, conference 3–6) hosted the Saint Joseph’s University Hawks (overall 18–4, conference 7–2). This basketball game marked the 51st meeting between these two teams, with the Hawks leading the all-time series 33–17. It should be mentioned that Saint Joseph’s had won the earlier contest in the season in Philadelphia. This meet was also part of the Jesuit Basketball Spotlight (JBS), which is a national effort to capitalize on basketball games between Jesuit institutions. As the game started, the home team quickly jumped to a 7–0 lead four minutes into the game. However, Saint Joseph’s would take advantage of an 18–6 run in the next seven minutes to go up 18–13 with 8:48 remaining in the half. Both teams would then go on separate scoring surges, but Fordham headed into the break down 40–30. In the second half, Coach Phil Martelli’s Hawks used a 15–4 run to take a dominating 55–37 lead with 14:29 left. The closest the Rams came to trimming the deficit was 13. Despite the soldout home game, the Coach Neubauer’s squad lost with a final score of 82–60. The Rams were led on the offensive end by Ryan Rhoomes and Christian Sengfelder, who each scored 16 points. Jon Severe added 14 points of his own.

Fordham looks to take victories in their remaining eight games of the season, starting with their next game against St. Bonaventure University.