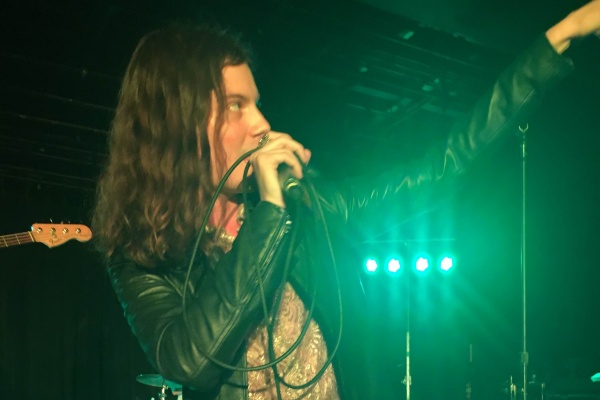 BØRNS gets up close and personal with the audience at WinterFest 2016. (REESE RAVNER/THE OBSERVER)

Upon entering the Lowenstein Lobby on Friday Jan. 29, one was immediately met with a sea of WinterFest volunteers, denoted by their blue shirts, that consisted of Fordham staff and students. Excited concert-goers steadily poured into Pope Auditorium, eagerly awaiting the start of the sold-out show.

The night kicked off with the guitar-violin duo of Audrey Fenter, Fordham College Lincoln Center (FCLC) ‘19, and Emma Hasselbach, FCLC ‘19. Fenter, who played the guitar, provided the vocals for the performance with Hasselbach accompanying the tracks with a violin. The pair played a mellow acoustic set, consisting of popular ballads like Adele’s hit “Hello,” that showcased Fenter’s vocal range and Hasselbach’s musical technique.

Avenue Eight, a 10-member band fronted by Franco Giacomarra, FCLC ’19,  took the stage next. In contrast to Fenter and Hasselbach’s soft, calm set, Avenue Eight hit the stage full of energy. If the band’s goal was to get the crowd moving, it worked. They jumped around and danced on stage with bright, multicolored lights shining behind them and the crowd followed suit. Avenue Eight played a mixture of original songs and covers that included Amy Winehouse’s “Valerie” and “I Want You Back” by the Jackson 5.

As Avenue Eight exited the stage, the energy in the venue began to build as the crowd anticipated the start of BØRNS’ set. After approximately 35 minutes of waiting, the crowd grew impatient, chanting “BØRNS” over and over until it seemed he was finally coming to the stage. It was a false alarm—just a minor pause in the background music.

Finally, at 7:51 p.m, the lights on the stage darkened. Fordham students in attendance  began to cheer wildly and wave their arms in the air as BØRNS and his band entered the stage. As soon as the first notes of “10,000 Emerald Pools” sounded, WinterFest attendees cheered— screaming the lyrics and swaying to the indie-pop sound.

After completing his third song of the night, “Past Lives,” BØRNS took a moment and introduced himself and his band, “Hello New York City. I am BØRNS. We are BØRNS. You are BØRNS.” Following his brief introduction, BØRNS played a few more of his signature psychedelic-pop songs, before pausing for a moment to slow it down. BØRNS walked to the corner of the stage, where he grabbed an electric red Fender Coranado II and performed without heavy backup from his band—the song focused purely on BØRNS’ vocal ability.

BØRNS was very engaging with the crowd through the event, speaking both about the songs he was about to perform and the audience. He asked those in attendance to “remember the spirits in the room,” as they danced and sang. At one point during the set, BØRNS addressed the crowd as a whole, saying “You all smell so good, like pheromones.”

BØRNS was also careful to make sure the audience felt included and connected to the performance, as was evident in his opening remarks to the song “Dopamine.” BØRNS stood front and center at the microphone, glanced around the crowd, and crooned “This is Dopamine. And Dopa-yours…Dopa-ours.”

Halfway through performing “Dopamine”, BØRNS ripped off his leather jacket, making the audience go wild. The ambiance in the mood stayed electric and excited after this, as strobe lights lit up the auditorium. Abruptly at 8:41 p.m, BØRNS  said his departing words and left the stage. Concert-goers in auditorium immediately began screaming for an encore and the band returned to the stage two minutes later.

BØRNS’ encore consisted of two songs. He closed the night by playing “Electric Love”, the most popular song on his album “Dopamine”. As he exited the stage, BØRNS made sure to thank those in attendance, grabbing as many hands as he could. Reese Ravner, FCLC ‘19 and the Observer’s assistant features editor, was one of the girls to get a touch of the famous rockstar.

“I was super excited! It was cool to be able to touch and connect with him even though it was very brief,” Ravner commented. Ravner, who loves BØRNS’ music, was thrilled to be able to get a fleeting touch of the man she admires. “Having that type of interaction…it adds a new element to the music,” Ravner stated.