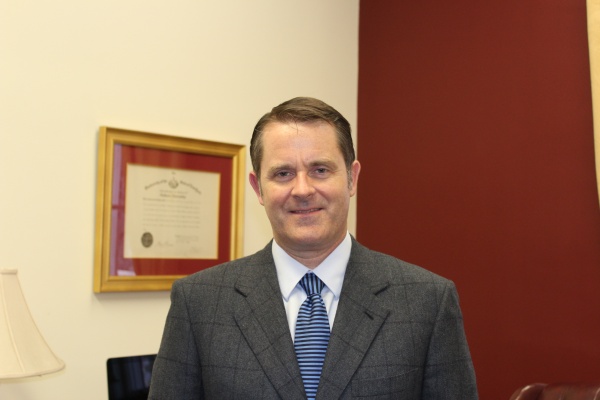 A Fordham administrator explains the importance of learning within the Jesuit identity. (CONNOR MANNION/THE OBSERVER)

“The first thing I noticed about New York is the cold!” Michael C. McCarthy, S.J. and the new vice president for Mission Integration and Planning, said. He hails from a much warmer area of the country, California, where he taught and administered at Santa Clara University, which calls itself the “Jesuit University of Silicon Valley.” McCarthy now comes to Fordham to lead Mission Integration and Planning, a rebranded name for University Mission and Ministry.

McCarthy is familiar with the mission of the Jesuits, having entered the novitiate in his second year at Stanford at age 19. “Over the course of my time as a Jesuit, I’ve spent a lot of time in education, with my Ph.D. from Notre Dame in patristics, or early Christian theology.”

“I’ve been a faculty member at Santa Clara for the past 12 years, and in administration for the past five years as the executive director of the Ignatian Center for Jesuit Education.”

As McCarthy says, he reached a crossroads during his tenure at Santa Clara. “I thought [I] would either stay there my whole life or switch, and I think it’s good for a human being to experience new places and new challenges, which is what ultimately led me to Fordham.”

But he feels comfortable here, despite having moved across the country. “There’s something comfortable to me about a city, being in New York in particular.”

Another change McCarthy brings is the renaming of Mission and Ministry. “One of the things that’s important for Jesuit universities is for the ethos to permeate all parts of it, not just in ministry,” he said.

“What’s being signaled in the change of the name is that mission is something that everyone takes part in, so our role will be to see how we can support all offices on campus and strategically plan how we can best live the Jesuit mission.”

Despite this push for strategic integration, McCarthy believes there will be no real change to the offices already under Mission and Ministry: Campus Ministry, the Dorothy Day Center for Service and Justice and Global Outreach.

While McCarthy’s office is located in Cunnife House, the location of executive administration at Fordham including Joseph M. McShane S.J., president of Fordham University, he expects to visit Lincoln Center often. “My first goal is to meet people at Lincoln Center, which is even more in the city than [Santa Clara],” he said.

“The next thing would be to ask how the various programs in Mission Integration and Planning at Lincoln Center can do better. For instance, Global Outreach really wants to establish itself there and create more student involvement,” he said.

Despite his high-ranking position, McCarthy also hopes to directly interact with students as a faculty member, if possible. “My hope would be that I could teach. When I started in  administration at Santa Clara, I didn’t have the opportunity to teach, and I hope there will be more opportunity for that here.” He added he would be happy to teach in whatever the theology or classics department would need of him, “mostly because you can really learn what the university is when engaging with students on that level,” he added.

McShane, passing by McCarthy’s office, stated that he is a “fantastic addition to the university and a wonderful man. Despite the fact he’s from California,” the lifelong New Yorker added jokingly.