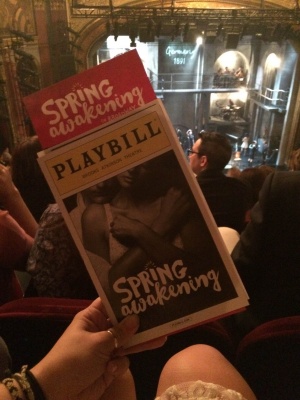 In 2006, Duncan Sheik and Steven Sater created a Broadway musical that challenged all previous notions of what it meant to be on Broadway. Now, “Spring Awakening” has returned to Broadway, six years after the original production’s closing date. The revival production began its very limited engagement at the Brooks Atkinson Theatre on Sept. 27, 2015 and continued to push the boundaries of live theater— the entire production is performed simultaneously in American Sign Language and spoken English.

“Spring Awakening,” set in late 19th-century Germany, is the story of a group of young teenagers’ sexual awakening. The musical explores controversial themes of teenage pregnancy, child abuse, suicide and homosexuality using alternative rock music to capture and reflect the teenage angst felt by the characters. The revival is produced by Los Angeles based Deaf West Theatre, an organization which aims to bring deaf culture and deaf education to the performing arts.

This is not the first time Deaf West Theatre has brought its innovative production style to Broadway. In 2003, Deaf West’s production of “Big River” also made it to Broadway, running for a very limited engagement at the American Airlines Theatre. “Big River” is based on the novel “The Adventures of Huckleberry Finn” by Mark Twain and centers around Finn’s travels with Jim, his friend and runaway slave. Michael Arden, who played Tom Sawyer in the 2003 production, went on to become a director for Deaf West Theatre Company and is now the director of “Spring Awakening”.

The cast of the revival production of “Spring Awakening” is composed of deaf, hard of hearing  and hearing actors. However, all members of the ensemble, despite their hearing capabilities, use American Sign Language. Each character played by an actor that is deaf is partnered with a hearing actor that concurrently speaks what their partner signs.

The partners move throughout the scenes together, with the deaf performer acting as the lead and the hearing performer acting as a visible representation of their characters’ subconsciousness. This partner system helps the viewers understand the how the confused and turbulent mind of the teenagers process information and make choices given their repressed and heavily monitored upbringing.

The “Spring Awakening” revival cast is faced with an incredibly challenging task— expressing song lyrics filled with emotion and depth using American Sign Language.  The actors must find a way to move beautifully and fluidly, while performing exact, specific motions that somehow manages to retain the feeling of the emotionally charged lyrics.

Each word being signed is packed with emotion to give a visual and audial representation of what the characters feel. For the heavier, angry, fast paced songs, lyrics are signed using quick, jerky motion to mimic the inner anguish felt by the characters. For the sweet, softer love songs of the production, lyrics are signed slower and more gracefully. At times during duets between love interests, each character will physically sign on the other person, tracing a finger along their partner’s forehead to show their love and compassion for one another.

The revival of “Spring Awakening” played its final show on Jan. 24, 2016. However, Arden and the show’s producers released a statement in which they revealed their plans to take the production on a national tour starting in 2017.