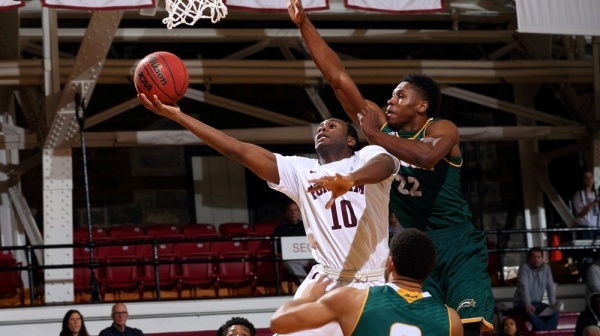 While many Fordham students were out of class during the past month, this wasn’t the case for the Fordham men’s basketball team. Their classroom became the Rose Hill Gym and their homework was preparing for conference play. After another week on the hardwood, the Fordham University men’s basketball team improved its record to 11-6. This past week, Coach Neubauer and his squad first faced off against Saint Joseph’s University and then, George Mason University.

On Saturday Jan. 16, the Rams (overall 10-5, conference 1-3) traveled down to the city of brotherly love to play the Saint Joseph’s University Hawks (overall 13-3, conference 3-1 conference) at Hagan Arena. This was the 50th meeting between these two teams, with the Hawks leading the all-time series 32-17. For the Rams, their 10-5 overall record was their best start since the 1971-72 team achieved the same. Fordham hoped to bounce back after its 88-54 league loss at Virginia Commonwealth University (VCU). Saint Joseph’s, on the other hand, entered the game hoping to extend its winning streak after defeating George Mason University with an 87-73 victory its previous game. Coach Neubauer’s squad started off cold, trailing 11-2 five minutes into the contest. Ryan Rhoomes then started a 9-4 run following Antwoine Anderson’s three-pointer with 10:52 left in the half. Mandell Thomas later scored at the 7:21 mark, making the score 23-18. However, Coach Phil Martelli’s Hawks surged to take a 34-20 lead with 3:24 remaining. In the second half, Fordham’s woes continued with Saint Joseph’s taking a 48-28 lead with 14:18 left in the game. The Rams’ offense and defense became stagnant as the Hawks would score 13 of the next 14 points. Saint Joseph’s would go on to win with a final score of 80-55. Fordham’s offense was led by Christian Sengfelder, Jon Severe, and Ryan Rhoomes, who combined for 36 points.

On Wednesday Jan. 20, Fordham (overall 10-6, conference 1-4) was back at the Rose Hill Gym to host George Mason University’s Patriots (overall 7-11, conference 1-4). The Rams hoped to bounce back from their loss at Saint Joseph’s. The Patriots, on the contrary, entered after a 92-79 league victory at Saint Louis. This marked the sixth meeting between Fordham and George Mason with the Rams winning all five previous matchups. Before tipoff, the Rams mourned the loss of Johnny Bach. Bach was one of the most successful Fordham men’s basketball coaches, who spent eighteen years in the Bronx. As the game started off, the home team jumped to a 17-9 lead seven minutes into the game. An Anderson layup widened Fordham’s lead to eleven with 5:11 remaining. George Mason fought back to make it a seven point game, but buckets from Thomas and Sengfelder gave the Rams a 37-28 lead at the half. After the break, they extended their lead to fourteen points, up 47-33 with 14:05 remaining. The two teams went back and forth exchanging buckets, with the Patriots managing to cut their deficit to four, with under five minutes to go. Anderson ignited an 8-0 run with his three-pointer helping Fordham take a 70-58 lead. The Rams finished with a score of 73-62, snapping their three-game losing streak. After having three losses in which its opponents averaged 87.0 points per game, Coach Neubauer’s defense held George Mason to only 63 points.The Rams also forced 17 turnovers and nine steals, which converted into 20 points. The Fordham offense was led by Anderson and Sengfelder, who scored 23 and 16 points, respectively. Thomas and Rhoomes combined for 21 points and 13 rebounds.

Fordham returns to the court on Wednesday, Jan. 27 when they play the Rhode Island Rams at 7 p.m.