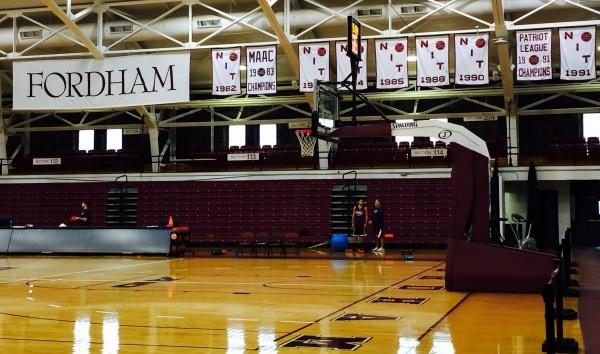 With another week on the hardwood in the books, the Fordham men’s basketball team improved to a 5-1 overall record for the season. This past week featured two New York City “Battle of the Borough” matchups for Fordham. The first came against Manhattan College and the second against St. John’s University.

On Saturday Nov. 28, Coach Jeff Neubauer and his Fordham Rams (3-1) hosted the Manhattan College Jaspers (1-2). This matchup marked the 108th installment of the “Battle of the Bronx” game, with the Jaspers leading the all-time series 56-51. In last year’s meeting between these two teams at Barclays Center, Manhattan took the victory 71-57. As a team that has not been at a deficit during a game at the historic Rose Hill Gym this season, the Rams ran into some trouble early in the first half. Manhattan’s Rich Williams knocked down a jumper at the midway mark of the first half, giving his team a 16-15 lead. As the first half progressed, they continued to make plays on the offensive end, leading 29-27 with 5:17 remaining in the half. A minute later, Fordham sophomore forward Christian Sengfelder knocked down a three to put his team up for good. This started a 9-1 run for the Rams, capping with a 42-33 lead heading into halftime. As the second half got going, Fordham junior guard Jon Severe knocked down a three, spurting a 9-0 run that ended with 14:39 remaining, putting Fordham up 55-39. Although Coach Steve Masiello’s team fought back cutting down the lead to ten points, the Fordham offense ignited once again, this time with a 11-3 run. The Rams took a commanding 87-63 victory over the Jaspers. Leading Fordham was Mandell Thomas, who scored 26 points, including shooting 4-6 from downtown. His second half charge sealed the deal for the Rams, earning himself the Mike Cohen Most Valuable Player Award. Senior Ryan Rhoomes also recorded a double-double with 20 points and ten rebounds to go with a career-high six blocks. Antwoine Anderson, a redshirt sophomore guard, and Sengfelder also combined for 26 points. The 87 points scored by Fordham were the most in a game against Manhattan since 1987, when they scored 96. This victory extended the team’s winning streak to four.

On Dec. 2, the Fordham Rams (4-1) hosted the Red Storm from St. John’s University (4-2). It’s not common to receive an email from Public Safety a day before a matchup urging students to come early due to the limited amount of remaining seats. However, this was the case for this matchup. After all, it featured not only a clash between two teams from New York City, but two teams from the Atlantic-10 and Big East Conferences. This contest was the 87th meeting between these two teams, with the Red Storm leading the all-time series 65-21. Even though St. John’s had won the past four meetings, including a 74-53 win last season at Madison Square Garden, both teams featured new faces this time around. Chris Mullin, an NBA legend, was now the head coach for St. John’s, while Jeff Neubauer, a long-time proven NCAA head coach, was now leading Fordham. The Rams jumped to an early 6-0 lead, four minutes into the game, with baskets by Rhoomes, Thomas, and Severe. With 9:41 left in the first half, the Red Storm’s Ron Mvouika cut the deficit to one with a layup, down 16-15. Fordham then answered back with a 12-2 run, started off by Rhoomes’ put back at the 5:38 mark, giving the Rams a 28-17 advantage. Although the Johnnies cut down the lead to nine, the Rams’ potent offense spurted for another 7-0 run, heading into the break with a 41-25 lead. At the midway point in the second half, the Red Storm cut Fordham’s lead to 12, down 53-41. But, the defensive scheme run by Coach Neubauer was just too much for the younger St. John’s team to handle. The Rams won win a final score of 73-57, led by Rhoomes’ career-high 26 points and 12 rebounds. Mandell and Severe both chipped in 14 points, with Sengfelder adding in another eight of his own. This victory extended Fordham’s winning streak to five games, and an overall record of (5-1). After the game, Neubauer shared his thoughts, saying, “All I know is these guys are playing for each other. They’re playing together, they’re sharing the ball, defensively they’re there for each other.” Mullin also gave credit to the Fordham defense, stating, “They played great, they played with force. They got all the 50-50 balls, all the hustle plays they made.”

Fordham returns to action next week with three games. First, on Tuesday Dec. 8, they host the Long Island University Brooklyn Blackbirds. Then, on Sunday Dec. 13, the Rams will host the Coppin State University Bald Eagles.