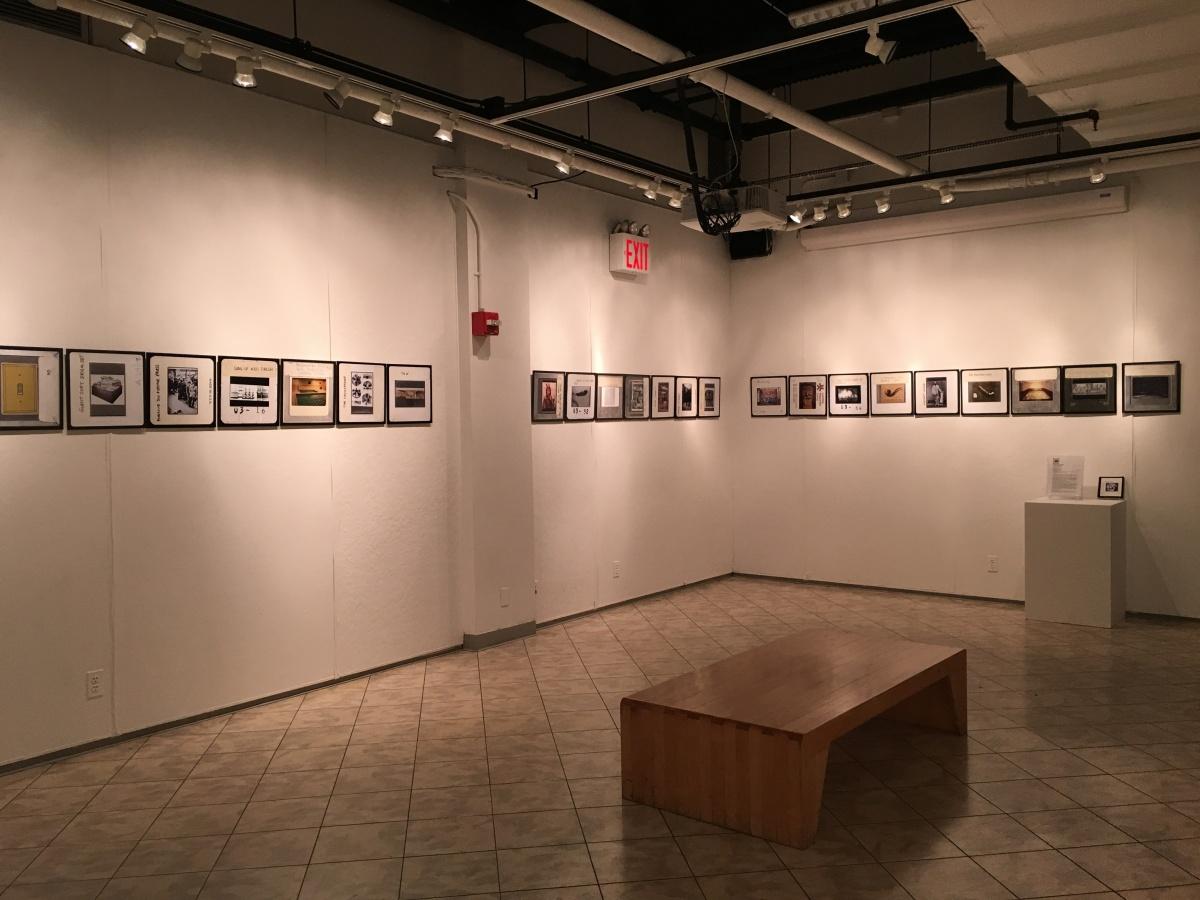 "The Evil Genius of a King" is one of the slides in a selection that has been sequenced in a continuous band around the Lipani Gallery. (JESSICA HANLEY/THE OBSERVER)

“The Evil Genius of a King” by Matthew Bakkom is currently on view at the Lipani Gallery in Fordham College Lincoln Center’s (FCLC) street level visual arts complex. The exhibit was curated by Stephan Apicella-Hitchcock, FCLC’s artist-in-residence and a long-time friend of Bakkom’s, and includes 52 enlargements of repurposed 35mm art history slides. The slides have been blown up into 12.5-inch square images, roughly the size of a vinyl record, and encircle the gallery in a continuous band. Bakkom said that the slides, which originally belonged to the St. Cloud State University art history department, were “literally going out the door and into the dumpster” before he received a call from a thoughtful colleague asking if he’d be interested in taking them. Thus began the lengthy process of sifting through roughly 10,000 slides from the originally 35,000-slide teaching collection.

The first slide that Bakkom pulled out contained an image of the painting “The Evil Genius of a King” by French painter Giorgio de Chirico, which became the inspiration for the selection of the many other images that, according to Bakkom, “may or may not be related” in the exhibit. Bakkom described the selection process as “intuitive and kind of improvisational, experimental even” and like “looking at the tiny little foot bones of art history.” Bakkom said that this alternative approach to art history is actually similar to the modern approach of internet searches, with seemingly random images popping up from an image search, but the difference is that the slides have an “edge.” Both literally and figuratively, the importance of the “edge” of the slides is fundamental to this project and shows the “physicality of information.” In terms of the collection as a whole, Bakkom said he “became interested in the invisible edges of history, which is what those slide cases are … No one in a classroom context would see the edge.” For him, the edge represents “the unseen part of the mechanism or the ghost in the machine” and shows the “tremendous amount of information outside of the frame.”

Bakkom’s artistic process involved combining back and front light scanning of the slides to produce a never before seen image of the slide with clarity of both the image and the edge.

“I went through and basically did an edit of the slides that I had. I scanned them both in transparent mode and reflective mode. So two passes on the scanner and then I wed the transparent to the reflective … I worked with Stephan Apicella-Hitchcock to refine [the FCLC show] specifically and boil it down even more [than previous showings.]”

Bakkom said he hopes that the audience, which may be unfamiliar with slides, will have an “enhanced experience with the notion of reproduction and the image” and an “awareness of how images operate in the world.” These images are at home in academia and have had a history of interaction with students. Their original use was for the intellectual growth of students and, in many ways, they continue to fulfill that purpose in “The Evil Genius of the King.”