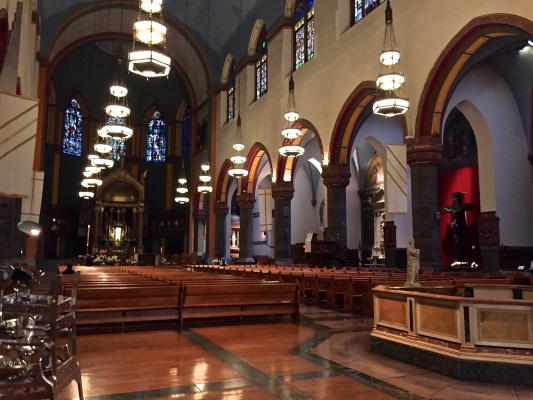 Fordham University is one of 28 Jesuit universities in the United States and the university’s religious affiliation affects students’ educations in varied ways.

According to the Fordham fact book compiled by the Office of Institutional Research (OIR) from Fall 2013, 30.8 percent of students at Fordham Lincoln Center (FLC) identified as Catholic, 3.7 percent as Jewish, 9.8 percent as Protestant, 20.2 percent checked the “other” box and 35.5 percent were unreported. Since Fall 2008 there has been a decrease in the number of students who identify as Catholic at LC. The percentage of self-identified Catholic students dropped from 45.4 in 2008 to 30.8 in 2013.

Considering the decrease in self-identified Catholic students at Fordham, what then makes the university attractive to students of varying faiths, and how do they adapt and respond to the university’s religious affiliation when it may not correspond to their own?

The university’s website defines a Jesuit education as, “living a life beyond self, helping to feed the hungry, clothe the poor, heal the sick. Service is a critical part of who we are, so much so that it’s built into our curricula.” To attain this, through University Mission and Ministry, the university offers Global Outreach programs designed to help foreign communities or communities in outside states. Integrated service learning seminars are provided through the Dorothy Day Center for Service and Justice. The Center on Religion and Culture offer students an outlet to juxtapose the role of religion with contemporary life and the Campus Ministry office provides students with opportunities to explore various faith communities.

Father John Shea, S.J., director of Campus Ministry at LC, recognizes the diverse student body at Fordham. “We will help anybody in any way no matter what faith they are,” he stated, adding “we’re also interested in learning about other people’s faiths.”

According to Shea, Fordham’s Jesuit education is meant to focus on the liberal arts, as “a liberal education opens people’s minds to see the bigger picture, especially that there’s a bigger world out there and there are actually many ways of doing things, a pluralism of ideas.”

In delineating what attracts non-Catholic students to Fordham, Shea recognizes three key elements that the university has to offer. The first is that as a Jesuit institution, Fordham provides an excellent education, according to Shea. “People are looking for quality schools and our schools are very good. You know you’re going to get a good education,” he said. The second factor is the “understanding that in a Jesuit school there is openness to all faiths. Many people of different faiths feel comfortable here because we don’t force Catholicism onto the students,” he said.

The third element is something Shea considers unique to Jesuit universities: the value of ‘Cura Personalis’, which entails “that we take care of you totally.” To explain this term he said: “We care about the individual, and to do that we only have small classes, we want [professors and faculty] to have a personal relationship with students. They are not going to let you be anonymous.”

In the pretext of educating the whole person, students are required to take courses in science, math, history, global studies, fine arts, foreign languages, theology, philosophy, literature and the social sciences. According to Shea, the reason behind the core curriculum and educating students broadly is to strive to “train the person to be an educated person that can think, evaluate, analyze and make decisions based on evidence. We encourage people to ask the question ‘why,’” Shea said.

Among some students, Fordham’s religious affiliation did little to affect their decision to attend the university, and were instead drawn to its location.

Nick Chow, Fordham College at Lincoln Center (FCLC) ’17, an agnostic student, remarked that he appreciates the idea of being taught a lot of different subjects. While initially reluctant to consider Fordham due to the Jesuit affiliation and required theology courses, Chow notes that “the theology courses are less about teaching you religious values and more about analyzing religion from a sociological point of view or questioning it.” Having first worried that Fordham would “push” Catholic values onto him, he notes, “One thing that I really like about Fordham is that, even though it is a Jesuit institution, it still allows you to do whatever you want to do and practice whatever you want to practice.”

Justin Rebollo, FCLC ‘18, an atheist, had similar thoughts on the required theology classes. “Because in our theology classes we study and critique religion, I don’t think they’re that bad, I think they’re actually informative,” he said, but that “it would definitely be faster and easier to not have to take theology.” Rebollo comments that the required theology classes “have exposed me a lot more to Christianity because I was never exposed to it growing up, and it has made me more accepting of other beliefs.”

Both Chow and Rebollo accounted for Fordham’s location in New York City as a big selling point. While both students are non-Catholic, they noted that Fordham does not hinder students of other faiths or of no faith to practice as they wish. In commenting on the Jesuit roots, Rebollo remarked that he “barely notices it,” but admits that he doesn’t seek out the religious offerings either.

How Jesuit values are rooted in the education offered by Fordham may in some cases go unnoticed by the students who do not wish to participate in such activities. However, Fr. Shea expressed that the Jesuit affiliation “comes in the sense that we’re not just interested in the formation of your mind, but the formation of your character.” According to him, not only is doing well in a chosen field important, “but we want you to be good and do a world of good.”