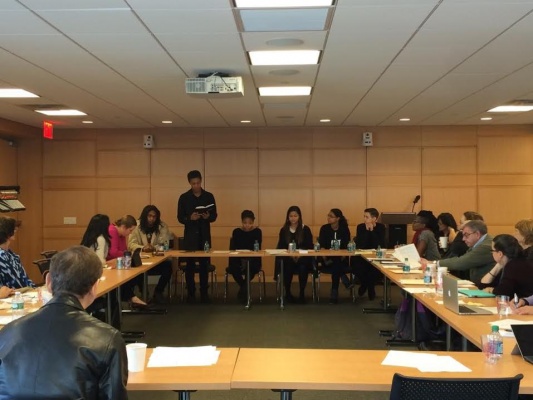 Six students presented their statements regarding their experience with institutionalized racism in front of the senators, the university president and the provost. (ANA FOTA/THE OBSERVER)

In light of the three reported bias incidents this fall, six invited students addressed the Faculty Senate last week, saying that Fordham has a racist history, and “its present does not erase that,” according to Eric Taylor, Fordham College at Lincoln Center (FCLC) ’18. Taylor, a theatre major, cited a security guard making a lynching joke at him as he was carrying ropes on his way to rehearsal as an example of aggression on campus.

Taylor was the first, out of the six students, to speak. “Fordham’s treatment of black and brown students can be called nothing other than violence,” he stated, adding, “The trauma that accompanies living under such a racist institution is damaging to the soul and to the mind.

“Do we want our students of color to fear for their lives?” Zann Ballsun-Simms, (FCLC) ’16, asked the audience. “The issue here is that we are terrified to talk about race,” she continued, adding, “I’m tired of not feeling safe in my own home, because Fordham is my home.”

Hans Lueders, FCRH ’16, said “All these stories might seem like horror stories but they are not, they happen daily. Sometimes they happen through microaggressions and sometimes someone carves a racial slur into your door.” Lueders also said that the “burden” of advocating for change should not be placed on the shoulders of those affected by it. “That being said,” he continued, “we will continue to act because we are so invested now. We’ve seen that without student participation, nothing gets done.”

Some anecdotes the students shared were based on responses to a survey they had sent out the week before, which had gotten 22 responses. The survey gave students who would not be present at the meeting a chance to be heard. Out of those responses, many were “malicious,” according to Chris Hennessy, FCLC ’16. Some specific ways in which the administration could respond were also brought forward, particularly the idea of a day-long teach-in on diversity issues and speech, and amending first year formation training for incoming freshmen.

The idea of inviting students to talk at a meeting was first introduced at the previous meeting by senate president Anne Fernald. “I thought it would make sense to invite some student leaders who are working on this issue to come speak to us about what they want from the faculty” she stated. While the Senate was originally looking for four students, six were present at the meeting.

“It is exhausting being black on this campus,” added one senator, with another saying “I have not been impressed at all with the administration’s response so far.”

The students were selected through the The Gender and Race Equity Committee, as well as the Faculty Diversity and Retention Committee and ASILI, Rose Hill’s Black Student Alliance. Each student presented a statement, some of them including suggestions of ways the faculty can address the diversity issues on campus. Major concerns were voiced by the group overall. The other two students were Scarly Rodriguez, (FCRH) ‘16 and Kayce Wilson, (FCLC) ‘19.

Also present at the meeting were Rev. Joseph M. McShane, S.J., president of Fordham University, and Stephen Freedman, university provost. Although silent during the presence of the students, McShane had made his own statement on the matter prior to the students’ entrance, saying, “There is no place for prejudice at Fordham, period.” Because of that, “the solution belongs to all of us. We are not divided among us, we are one on this, and we have to work together with our students who are as fervent regarding this as we are.” He cited growing up in New York as the reason for his “particularly short patience for anti-black and anti-semitic language.”

The students left the room after speaking, while Senate members went on to discuss the issue further. “They are entirely right that it is not their job,” declared one of them. A couple of senators commended the students for their bravery and eloquence. “It is exhausting being black on this campus,” added another, with yet another saying “I have not been impressed at all with the administration’s response so far.”

The following Tuesday, Fernald sent out a statement via email, to all faculty members and administratives, summarizing the issues brought forth by students and the talk that followed. She commended the students for their bravery, saying that they “demonstrated their powerful desire to work towards a better Fordham.”

After the meeting, Ballsun-Simms stated that she was feeling positive about the outcome. “I think it went well. The senate seemed receptive and I think they were genuinely interested in improving the university for students of color especially,” she said. Hennessy echoed this sentiment, saying “The Senate’s supportive response has provided us with an opportunity, but we need to act in order for its potential to be actualized. That means more students getting off of twitter and into administrator’s offices.”

Among the other issues discussed at the meeting were the high number of early action and early decision applications this fall, as well as the employment rates of the class of 2015, reported six months after graduation. According to statistics brought forth by the office of the president, 19 percent of the former students are currently seeking employment, while 18 percent went on to graduate schools.