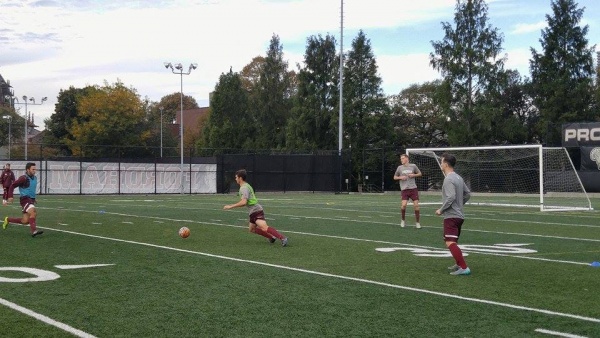 Vince Lombardi, a Fordham alumnus and sports legend, once said, “The greatest accomplishment is not in never falling, but in rising again after you fall.” The Fordham University soccer team exemplified this motto when they entered the 2015 season as the reigning Atlantic-10 Conference champions.

The road to a repeat would not only be difficult, but would also require overcoming adversity. The first of these challenges for Coach Jim McElderry and his squad would be a replacement for goalkeeper Sean Brailey, Fordham College at Rose Hill (FCRH) ‘15.

At the outset of the year, the Rams were without a seasoned goalkeeper. This was when one of Fordham’s unfamiliar faces earned himself plenty of facetime. Freshman Rashid Nuhu, FCRH ‘19, tackled the odds and received the nod to fill in the opening left by Brailey. Nuhu, a Ghanaian native and graduate of Kent School in Connecticut, came into training camp with hopes of at least being a small part of the 30-man squad. In fact, he stated, “My mindset was simply to do my best.” He exceeded expectations and ended up being Coach McElderry’s first choice to start as the goaltender.

As the preseason wrapped up, Coach McElderry’s starting forward, Andres Penfold, FCRH ‘16, was named to the Atlantic-10 All-Conference team. When asked about this accolade, the redshirt senior credited his success to the collective efforts of the team, saying, “This recognition is great for the soccer program.” A redshirt senior is a student athlete who uses five academic years to utilize the four years of NCAA eligibility by not playing his freshman year. Penfold came off of a record 2014 season, when he was named First Team All-Atlantic 10 after netting in seven goals and 16 points. He was also one of five Fordham players to start all 21 games.

As the regular season got going, this Ram squad faced many challenges, especially during the first couple games.

When asked to identify the toughest stretch of the season, both Nuhu and Penfold agreed that the way in which the season started was far from what they expected.

“After a successful preseason, we began the [regular] season 0–3,” Penfold said. “We worked hard as a unit, and not being able to immediately reap the benefits of [our] hard work hurt.”

The Rams commenced the season by traveling north to Beantown to face off against Boston University, where they lost in overtime with a final score of 1–2. A week later, Coach McElderry and his Rams took a road trip west to the Windy City to face off against another Jesuit school, Loyola-Chicago. Fordham fell behind in the second half and couldn’t make the most of its opportunities. Penfold attested that the “tough conditions in Chicago” made it difficult to win.

Two days later, the Rams faced off against DePaul, with hopes of bouncing back from their losing woes, but failed in a 0–4 loss. This left the team to question its tactics and whether it could truly return to the high level of competitive play it boasted just a season ago.

This was the ultimate test of adversity for Fordham soccer, and they answered back. It took three weeks for Coach McElderry and the Fordham men’s soccer team to capture their first win against Fairfield University, finishing with a final score of 3–2. Four days later, the Rams hosted their uptown rivals from Columbia University; again, Fordham was triumphant, defeating the Lions 1–0.

Nuhu’s eight saves during this two-game winning span was a major factor in Fordham’s success. He didn’t shy away from modesty, attributing his success to his teammates and the wall of defenders that protect him each and every game. “I have to give thanks to my defense,” he said.

Despite the ups and downs of the season, Penfold emphasized the solidarity that existed within the team, saying, “the beauty of college athletics is the camaraderie that exists on this team…. [Our] ability to overcome adversity shows the character of our team.” Indeed, Andres and his teammates proved that when the stakes are high, they don’t waste time in getting the job done. The Rams were successful in four of their first five Atlantic-10 Conference games, defeating La Salle, Davidson, Duquesne and even Rhode Island. In fact, three of these four victories were all shutouts which once again served as a testament to the ability of the men’s soccer team to defend at the most crucial times.

In spite of Fordham’s inability to capture victories in its last three games against George Mason, Dayton and Massachusetts, Coach McElderry and his team managed to end the regular season with a 7–7–4 record. The Rams then set their eyes on the final Atlantic-10 tournament, which was their last hope to finish as champions. This journey began when Fordham traveled down to Fairfax, Virginia, ahead of its Nov. 12 matchup against the University of  Massachusetts.

These two teams had faced off only five days prior to this meeting, with the Minutemen winning 1–0. This time around the Rams fought long and hard, when in the 83rd minute a set of passes between Eric Ohlendorf, Jannik Loebe and Janos Loebe earned the Rams a penalty at the top of the six-yard box. Jannik Loebe drilled the penalty, scoring his fifth goal of the season and putting Fordham on top. This secured Coach McElderry’s team a spot in the following day’s semifinals against Virginia Commonwealth University (VCU). Despite the excellent defensive showing by Fordham, VCU’s Rafa Andrade Santos netted a 23-yard goal at the end of the first half, ultimately pulling his team towards victory. This was enough to end the Rams’ turbulent season.

Although the season didn’t act in favor of Fordham, overcoming adversity was a lesson that many of the younger players will take with them for the future. After all, this is a squad that had four of its players named to All-Conference teams this season, including freshmen Janos Loebe and Rashid Nuhu, as well as sophomores Jannik Loebe and Matthew Lewis.

“This season has been a roller coaster,” Penfold stated. He did agree that much of this wouldn’t have been possible without the support of a great coaching staff. “[Our] coaching staff does an unbelievable job preparing us for games,” he said. With such an immense group of dedicated personnel, the future is bright for Fordham men’s soccer. In Vince Lombardi’s words, the greatest accomplishment for these Rams will be to use this season as a means of “rising again” to a new level of dominance next season.