Trump vs Carson: A Populist Nightmare 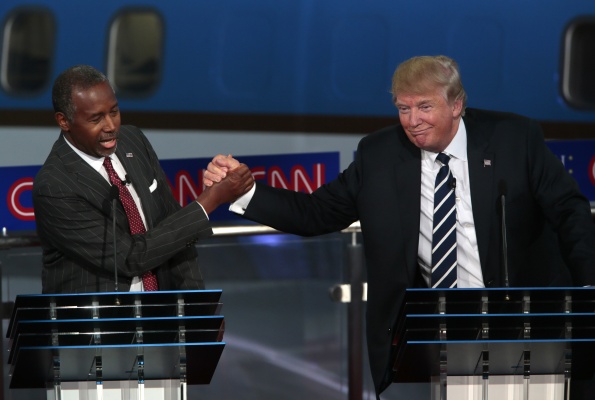 I had the “luck” to find myself  on a line for a book signing for Donald Trump this month. I did not like his candidacy for president in the slightest–to put it mildly–nor did I particularly heed the counsel and words of a candidate who believed that we could solve illegal immigration by simply building a large wall. But I still wanted to see him in person, if only to see if he truly was everything the tales said he was. Then I saw and heard the hateful chanting of many of his supporters, throwing out such phrases as “Expel the Illegals” and “Deport them!” among other slurs and remarks. Their hatred was both unsettling and horrifying. I left the line for Trump Towers behind me in a huff of disgust. However, as I walked away, it dawned on me why people like Donald Trump and Ben Carson are polling so high in the Republican primaries. The answer? Populism–appealing to the hopes and fears of the general population.

The anger in the eyes of the supporters at that rally embodied the soul of a movement taking root in America. According to a Fox News poll, Donald Trump is currently polling at 24 percent while Ben Carson stands at 23 percent–the top two contenders for the Republican primary. Trump and Carson are the heralds of a new right-wing populist movement that has gained traction and support not only by openly criticizing mainstream politics in Washington D.C., but also by playing on the nation’s fears. Carson plays upon the Islamophobia that is rampant in the United States in the wake of the rise of ISIS with his infamous comment that he believed a Muslim President would be incompatible with our nation and constitution. Carson’s strange mix of a scientific background and fundamental religious views make him an interesting candidate. Trump’s bombastic and entertaining smear attacks and plans also accomplish the same goal.

The Republican Party is currently going through a period of great ideological division, between the Libertarians, the Neo-Conservatives, and the Tea Party. This is why Rand Paul can be advocating one policy, Jeb Bush another, and Ted Cruz a completely different one. Party infighting and the resignation of John Boehner has weakened the Republicans in Congress in the wake of midterm elections. Thus Trump, a businessman and celebrity who is a master at cultivating his image and promotions, and Carson, the mild mannered creationist neurosurgeon, could arrive as political strangers to a divisive stage. Trump already has an image as a successful celebrity to work off of, and Carson himself has gained a following in the wake of his memoir. They are not mainstream politicians, and their very blunt, and downright offensive rhetoric has gotten a following amongst angry Americans. Yet in contrast to the democratic populist Bernie Sanders, their ideas lack substance and applicability. Carson wants to erase Medicare and Social Security which analysts have said would be catastrophic for millions of senior citizens, and would have severe repercussions for health care in the United States. According to the conservative American Action Forum, Donald Trump’s deportation policy would cost between $400 and $600 billion alone, with billions more spent on maintaining a wall on the border. These policies are unrealistic, but the very heated and offensive comments of Trump and Carson seem to be doing more to push them at the head of the polls than most of their ideas.

More mainstream candidates like Marco Rubio and Carly Fiorina have risen in the polls, yet others like Jeb Bush and Mike Huckabee have collapsed. It is a strange time for politics in the Republican Party, as the GOP Party Leadership clearly does not want candidates like Carson and Trump, primarily because they are not part of the political system and are outsiders with inflammatory ideologies that the party does not necessarily promote. Trump in particular has alienated Fox News after his misogynistic comments towards women, particularly debate moderator Megyn Kelly. Yet in a wave of populism, voters are siding with Trump and Carson, out of fear, racism, hate, inspiration and faith. Trump in particular has gained serious traction by opposing Super PACS and for funding his own campaign, a statement which he repeats constantly to voters. Carson is popular with some Whites in the wake of the growing Black Lives Matter Movement, a group that has caused quite a bit of unrest, because he takes a conservative approach to the criminal justice system and the police. This, and his background as an accomplished doctor makes him seem like a viable option. However his disconnect with black Americans’ suffering under the current criminal justice system, and his controversial comments likening slavery to abortion prove otherwise.

These candidates have amassed large gatherings as part of a new Republican movement that is aimed at reducing government spending and involvement, and cracking down on defense and other enterprises–all topics that have instilled a certain fear in the American people in the past. Yet their usage of fear mongering and offensive speeches must be heeded as a warning as to how politicians can amass large blocks of support in little time. It remains to be seen whether we are seeing the rise of a new populist movement or more of a neo-Nativist movement.