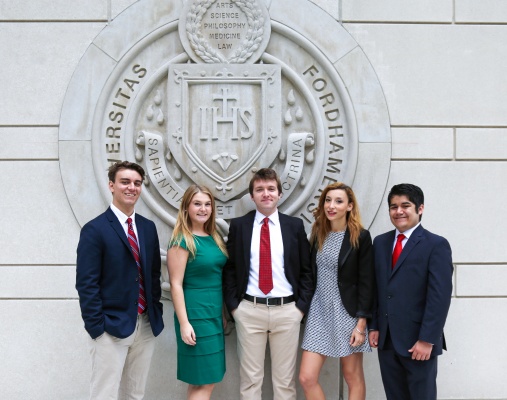 The USG executive board, pictured above, is part of the council, along with Freedman and Faye-Smith. (HANA KEININGHAM/THE OBSERVER)

“Nicholas Sawicki reached out to me over the summer,” Magoon said. “He had been working on this proposal to create this council to meet with the provost.”

“The intent was to create this forum that hadn’t existed, since no one had brought everyone together in this way before, and a couple weeks ago we had our first meeting.”

“The goal of this forum is to give our direct input on certain academic issues, and we did also talk a lot about the ongoing issues on campus.” Magoon continued, “And we’re planning our next meeting before the end of the semester right now.”

The forum is informal according to Magoon, as currently only the upper-ranking officers of both USG chapters meet with Freedman. “My counterparts at Rose Hill are looking to making this a more official meeting, since Ashley and Nick are seniors … as far as expansion goes, we want the council to be undergraduate-focused but we want structure so it has longevity.”

Currently the membership of the council is limited to the USG leaders, Freedman and Faye-Smith, but it may expand in the future. “Dr. Freedman also brought up bringing in guest speakers from other groups like Campus Ministry, and I mentioned bringing a rotating USG senator, but time will tell,” Magoon said.

As for specifics, the main issue that may be under discussion is the pluralism requirement in the core curriculum.

“The issue has been brought up by BSA and others about reformatting the pluralism requirement or adding a more comprehensive core course on racism. I know that faculty are bringing it up in their councils, but I’m hoping to bring up that students are talking about this as well,” Magoon said.

As for the rest of the meeting, Magoon is looking for student input on their concerns through USGLC. “The rest of the agenda will be finalized later and USG will be speaking to people to find out ‘what do you want brought up?’ as time goes on,” he said.