Theatre Review: “A View From the Bridge” 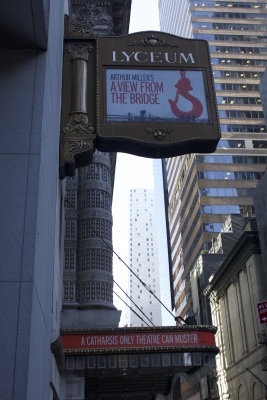 "A View From the Bridge" is being performed at the Lycecum Theatre on W 45 Street. (JESSICA HANLEY/THE OBSERVER)

Creating a perfect theatrical production is a near impossible endeavor. First, you need a perfect script, one that has a well balanced plot, developed characters and economic pacing. Next, you need professional and child-like actors who are willing to dive deep into the perfect text, yet still remain receptive and playful to the audience and themselves. After that, you need flawless direction that challenges, but stays true to the material. In most good productions, one will see one of these elements incorporated, two if they’re very lucky, but Director Ivo Van Hove’s revival of Arthur Miller’s “A View From the Bridge” not only has all of these elements, but sets a new standard on what theatre can be.

Fresh off of a completely sold out run at London’s Young Vic theatre, “A View From the Bridge” tells the story of Eddie Carbone, an Italian-American living in 1950s Brooklyn with his wife, Beatrice, and his adopted niece, Catherine, whom Eddie may harbour sexual feelings toward. Eddie comes home one day to find that his wife has housed two illegal immigrants from Sicily. Like many who came to America in the mid 20-century, these two seek the American dream. But when one of them falls in love with Eddie’s niece, Catherine, the audience soon learns that the dream comes at a cost.

Mark Strong viciously leads the cast, giving both a sympathetic and disgusting performance as the Greek tragedian like Eddie. Nicola Walker gives the role of Beatrice a loving, yet still tough, interpretation to offset Eddie’s creepiness and rage. It is a credit toward the actress that you want things to workout so badly for Phoebe Fox’s Catherine, yet from the start, you know this isn’t going to end well. Russell Tovey and Michael Zegen play the illegal Sicilian cousins, Rodolfo and Marco, respectively, and both personify the immigrant experience with tragedy, humor and rage.

Van Hove sets the action in a sparse, but contained space. There’s no furniture and hardly any props. Instead, the story is told purely through the actors. The set is a flat plain surrounded by glass walls that stand about one foot above the ground, which the actors often use for sitting. By doing this, Van Hove avoids creating a static place— rather it is a fluid space that allows the actor to play in and mold it. There are only about three different props used throughout the play, but when they are used their significance is emphasized through clear action. One notable scene in particular is when Marco lifts a heavy chair to show Eddie isn’t one to be messed with. It’s moments like these that truly separate the production from almost every other production.

Credit must be given to the sound designer, Tom Gibbons. As the play begins, classical choral music blasts through the speakers, and as the play goes on this music is always playing in the background. Sometimes it is purely subversive, and at others it crescendos loudly to add drama to the action. Another nice touch was the use of a simple beat. During certain scenes, a beat would be heard in the background, signifying some type of change in the action. This change could represent anything from a change of place to the most miniscule change of mind in a character. One notable scene that uses the beat to great effect is a seemingly banal conversation among the family. During this scene, the time between lines is painfully lengthened, thereby creating tension within the subtext of a seemingly boring conversation.

This show is a once-in-a-lifetime production and truely a great achievement of Van Hove and his cast and crew. Go see this show—you will come away from it completely exhausted but fulfilled. Official opening night is Nov. 12, but previews to see the show began on Oct. 21. “A View From the Bridge” runs until Feb. 21, 2016 at the Lycecum Theatre on W 45th Street.