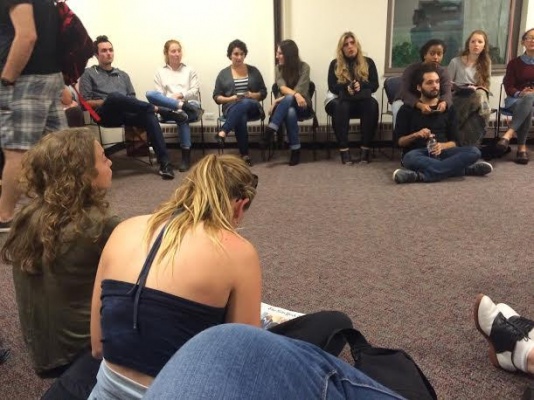 Around 100 students gathered at the meeting held on Thursday. (CECILE NEIDIG/THE OBSERVER)

The Office of Residential Life at Lincoln Center (LC) organized a series of four mandatory meetings on the evenings of Oct. 19th to the 22nd, for residents of McMahon Hall, in response to the two bias incidents that occurred at Rose Hill earlier this year. Concomitantly, floor meetings were organized for all the freshmen in McKeon to attend.

At each meeting, the discussions were facilitated by four resident assistants (RA), and one or multiple higher-ranking members of the Residential Life staff. Among them was Jenifer Campbell, director of residential life, and Samantha Tymchyn, resident director (RD) for McMahon Hall.

“We are in the business of education, it’s part of our responsibility to educate individuals and let them talk about the next steps we have to take,” Campbell stated. Tymchyn echoed this sentiment,  “We wanted the meetings to be first community oriented, which we don’t get a lot of in McMahon, because it has more of an independent-living structure.”

One frustration voiced by students was the accused late nature of the meetings, happening a month after the incidents were reported. According to the Dean of Students at Lincoln Center Keith Eldredge, the meetings were prompted by the email sent out on Sept. 18th by the Rev. Joseph M. McShane, S.J., president of Fordham University, in response to the incidents.

“I was on the bus going to President’s Ball, when I saw the email,” Eldredge said. A few days later he and Campbell met to discuss a course of action. “One thing we talked about was what we wanted the goal of these meetings to be,” he stated. Although Residential Life staff is trained in regards to diversity issues on campus, certain talking points needed drafting in preparation for leading the meetings and answering the questions of students.

“Just as some faculty members who don’t teach about diversity on a regular basis had to get up to speed with the information they can provide students with, the same thing happened with our RAs,” Campbell said, adding, “I would hate for them to go into any arena where they are not fully aware of all the intricacies of a situation so that they can present what happened and what the follow-up has been.”

The two “incidents of hate,” as referred to in the flyers put up by the office, were discussed, as well as the measures the university administration is taking in regards to them.

“One of the things that we offered at the meetings was the opportunity to talk to us on an individual basis, making staff available,” Campbell said.

“The RAs tried to express in every meeting that they are available for students as a support, as not everyone understands the full capacity of the RA role,’’ Tymchyn emphasized.

“It is important that the entire community is not only aware but alert that this is happening,” Susan Formosa, Graduate School of Law and an RA in McMahon, said during one of the meetings. Similar incidents that happened during previous years at Fordham were brought into discussion as well.

“It was great that there was a large turnout, but I think that in larger groups we tend to hide ourselves,” Aja Singletary, Fordham College at Lincoln Center (FCLC) ‘16, one of the students at the meeting said. “I think that if we want to have these kinds of meetings we need to have them in smaller groups so more people feel comfortable to speak,” she added.

Josh Hall, FCLC ‘18, agreed, saying, “This town hall style is great for venting feelings and emotions, but in such a large group it makes it harder to demand that everyone in attendance is actually present and aware of what’s being said,” he continued. Hall also noted that a lot of times hate comes out of ignorance, and “the only way to cure ignorance is to educate.”

Rumors were sparked by the use of the word “mandatory,” leading students to believe that anyone absent from the meetings would face consequences. In reality, everyone who did not attend will get an email version of the talking points.

According to Tymchyn, the office got around 100 email responses from students, expressing interest in the meetings but not being able to attend. “I think that’s actually the highest rating of email feedback we’ve received from students,” she said, adding, “It was really nice to see that people, even if they couldn’t attend, expressed why, and were looking for some kind of digital conversation.”

“I do think there was an element of community that was built at the meetings,”she stated. “It got me thinking a lot about more civility programs. I think students did want to stand together and talk about it as a community.”

Out of the undergraduates living in McMahon, 461 attended the meetings. No similar event was organized for commuters. “It’s hard to bring commuters together because of scheduling conflicts,” Sahcha Pierre-Louis, Gabelli School of Business(GSB) ‘18, said, “but we do talk about this amongst ourselves when we need to. In the Student Lounge or other commuter spaces on campus, whenever it comes naturally.”