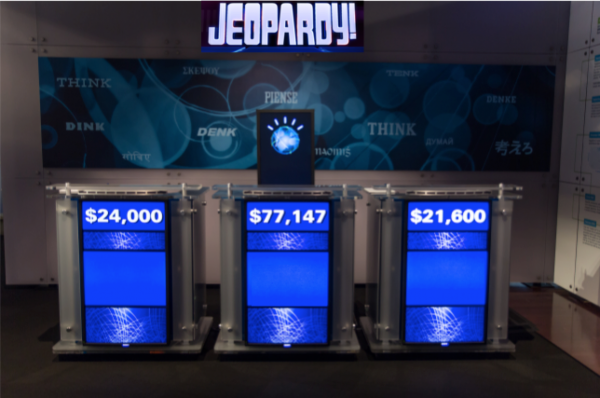 The three podiums from the TV show Jeopardy!, in which Fordham alumnus, Dennis Golin appeared on for the third time on October 23rd. (COURTESY OF ATOMIC TACO VIA FLICKR)

Dennis Golin, Fordham College at Lincoln Center (FCLC) ’13 appeared for the third time on the infamous quiz show, Jeopardy!, on Friday, Oct. 23rd,  after having won the previous two nights.  Hailed as the “returning champion,” Golin was advised by host Alex Trebek to “relax a little bit,” as he had won  $59,099 in the two previous shows.

Golin’s appearance on the show is one in a series of events involving the Fordham community and the popular show, following Trebek’s announcement that he would be donating $1 million to endow a scholarship for Fordham undergraduate students living in North Harlem and his appearance at Rose Hill in 2011 to speak to students.

Golin tried to avoid Trebek during his first visit to Fordham,  according to Trebek’s interview with Fordham News.  Golin told Fordham News that he didn’t want to create a “conflict of interest,”  as he believed could possibly compromise his hopes of one day appearing on Jeopardy!, a show he claims to watch “religiously.”

Golin’s first appearance was on Wednesday. He won both that show and the following Thursday night show.  Unfortunately, his third appearance on Friday night did not go as smoothly, due to a Double Jeopardy question late in the show that cost him the entirety of his $11,000 earnings.  His only other try was for a $400 question that he did not answer correctly, putting him in the red and eliminating him from the Final Jeopardy round.

During these matches, he claimed to combat the pressure of getting questions right by imaging “everything as Monopoly money,”  according to his interview with Fordham News.  This confidence was shown especially in his Friday night appearance, where he would not waver in responding to questions and would often bounce between being in the red and making comebacks where he would rapidly win several thousand dollars.
Golin is also a video editor at the Jewish Broadcasting Center, and produces a late-night sketch-comedy show with fellow FCLC ‘13 alumni Adam Hemmert and Andrew Scherer on Manhattan’s public access cable network, according to Fordham News.